Back in May, the Center on Education Policy (located at George Washington University) released their report Listen To Us: Teacher Views and Voices. You may have missed the report because it didn't lend itself to any zippy coverage or grabby sound bite. If you are an actual teacher, virtually nothing in the results will make you go, "Wow! I had no idea!" The Center's own press release ("Demands of Teaching Taking Its Toll on Teachers") went with the story that here's some research showing the impact of reformy stuff and a possible explanation for why the teacher pipeline is drying up (and yes, it also included a usage error in the headline).

The surveys were completed by over 3,000 teachers (the Center bribed them with the chance to win a $500 Amazon card) with a distribution among subcategories by location and income pretty well matching the larger teacher population. There's a whole appendix on methodology that you can consult.

Again-- there are no huge shockers here, but let's check out some of the results. The charts below are all taken from the CEP report.

Teachers become teachers for mostly altruistic reasons. A non-zero number get in for the money. Hmm. 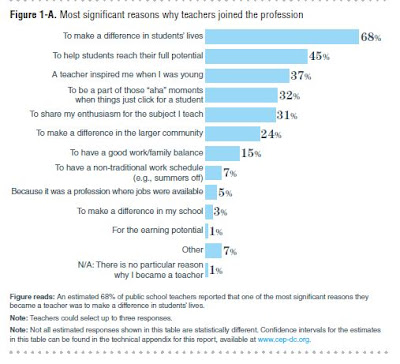 The rewarding part of teaching? 82% said "making a difference in students' lives." No big numbers for "seeing students get good score on Big Standardized Test."

What do teachers see as the big challenge? 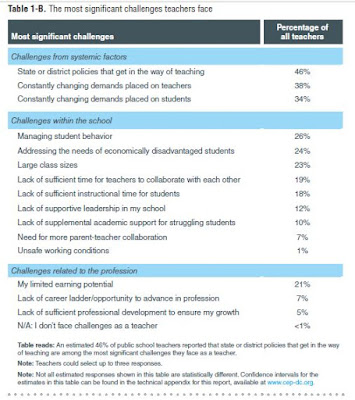 Notice the lack of career ladder ( a favorite feature for reformsters to "fix") doesn't rank all that high, and "I don't have challenges" was below 1%. Of those who picked "addressing needs of economically disadvantaged students," they broke those down with 42% saying emotional needs and 40% saying academic needs.

How about job satisfaction? 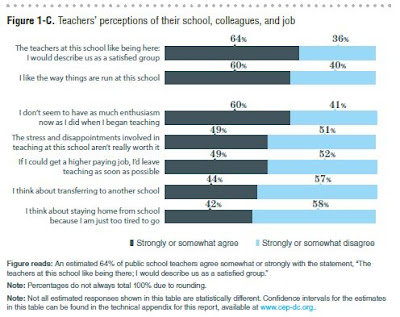 60% found themselves less enthusiastic? Ouch. And about half would get out if you offered them a higher-paying job. That is a bigger number than I would have predicted.

Respondents were asked what would help with their day to day work. More planning time, smaller classes, and more collaboration time with colleagues topped that list. Curricula that is better aligned to state standards was only selected by 7% of the teachers responding (and teachers could select up to three items on the list).

How about the actual weight of teacher voices? 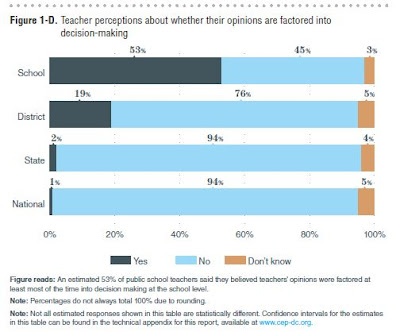 The researchers correlated this with the previous set of responses (1-C) with predictable results-- the less heard teachers tended to be the less happy teachers, though the correlation is not quite as strong as you might expect.

A series of questions asked about teacher collaboration, which many teachers value but which more often happens in informal, unofficial ways.

Another set of questions asked middle and high school teachers to consider college and career ready skills-- what they think they are, and whether or not their school addresses them. Here: 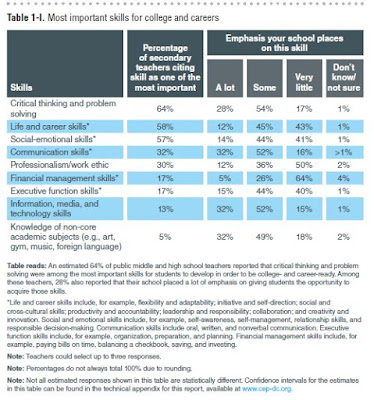 From which we can determine, if nothing else, that teacher ideas about curriculum values are not veryn influential in their schools.

Next, the survey addressed math and E:LA teachers specifically regarding the standards in their state. There were some curious findings here-

* About two-thirds of teachers said their autonomy had remained the same or increased under state standards-- though "autonomy" was defined as collaborating with other teachers, determining instructional strategies, or developing curriculum.
* They are using materials and curricula from all over the map
* The majority say they are using results from spring tests to modify their instruction in some way
* More than half don't know if the standards will be dumped or changed soon.

And yet, if we ask about autonomy in other ways, we find this: 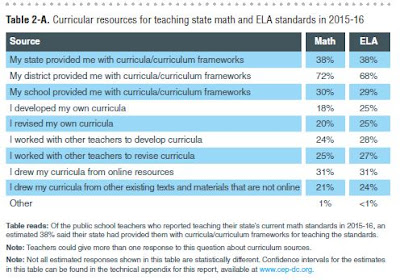 So, not so much autonomy.

Then the survey went on to ask teachers of Everything Else about the standards and how CCR stuff affected their classroom. The findings:

* About half those other teachers say they are teaching some CCR standards as laid out by the state, but hardly any changed anything they do in class. In other words, rewrite the paperwork for your curriculum so that the same stuff you have always done now "matches" the standards.
* About half the teachers see the test results. Few use those test results to change instructoin.


Next, the report looked at testing time.

When asked what tests to keep or jettison: 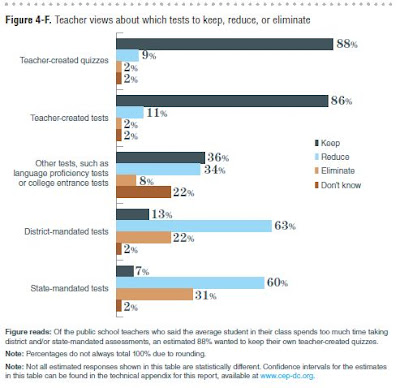 There are more charts and details in the actual report, and it all gives a picture of why, for instance, the teacher pipeline is drying up. It's not an earth-shattering report, but it does offer some insights as well as some data for people who want data points for their arguments.