You may have heard by now the satisfying news that the Supreme Court spanked Abbie Fisher in a decision that provides, as Salon put it, "A massive blow to mediocre white people coasting on their racial privilege." Fisher (and her lawyer, notorious affirmative action combatant Edward Blum) argued that as a mediocre white person, she should automatically get preference over a mediocre black person (I'm paraphrasing). Oh, and that the 14th Amendment should get lost.

The Supremes said not so much, and conservative Anthony Kennedy was the guy who helped them do it. You'll be reading about that decision all over the place-- but I want to focus on one excerpt from Kennedy's decision: 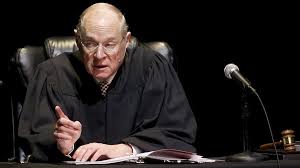 A university is in large part defined by those intangible qualities which are incapable of objective measurement but which make for greatness. Considerable deference is owed to a university in defining those intangible characteristics, like student body diversity, that are central to its identity and educational mission.


Emphasis mine. Damn straight, Justice Kennedy. And not just a university, but the individual human beings who make it up. In fact, all individual human beings. "I owe my success and my achievements in life, my whole rewarding existence, my greatness, to a set of qualities that are easily measured and quantified objectively," said nobody, ever. I am sure there will be many days to come on which I disagree with Justice Kennedy, but today is not that day.

Can we just plaster this up some place that it will be visible on the day that the court hears a case involving the use of narrow Big Standardized Tests of math and English to judge teachers, schools and students? Can we make a big meme and plaster it all around the intertoobz? Can we remind reformsters every chance we get about the intangible qualities that make for greatness, but evade objective measurement? And can I have a poster of this in my classroom, to remind myself and my students that greatness, achievement, happiness, and a rich and rewarding life are built out of qualities that defy measurement even as they are the foundation of every worthy and wonderful life that a human being has ever lived?
Posted by Peter Greene at Thursday, June 23, 2016