A while back, blogger Starr Sackstein took a whack a two part question-- has the definition of an educated person changed, and should our education delivery system change with it. My gut reaction, my visceral answer, is "Not really, and not really." But I didn't really have anything to back up my gut, so I've been mulling over this for a while. What were my viscera thinking when they passed along this answer.

Part of my reaction is to some embedded assumptions that Sackstein includes in the question. She contemplates the twelve years of education in various disciplines, and then pivots to larger questions:

Upon successful completion of high school, being "educated" meant a student went to a college of his/her choosing to major in a subject area that would yield a respectable job and potentially go on to higher education to ensure relevancy in his/her career path.

Students in my generation and earlier generations did this dutifully, if being "educated" was a value they or their families' held.

I'm not sure I buy this narrative, particularly if we go back a few generations. High schools only really caught on during the period between 1910 and 1940 (ish). You can find a variety of numbers, but the basic pattern is evident-- in 1910 only about 20% of US teens were enrolled in high school, and only about half of those finished. The Depression kicked the crap out of high school education, with teachers widely unemployed and many school districts simply shutting down. By 1940, high school attendance was still far, far short of 100%.

And if we're talking about college education, while it's stylistically appropriate for Sackstein to use "his/her," in 1947 barely half a million women went to college. In 1970, roughly a third of all women went to college (and there's no way to count how many matriculated, as many of my peers did, in order to get their MRS degree).

If you want to plow through 115 pages of somewhat depressing charts, check out this statistical breakdown of education from the census bureau (1993). Here's one-- in 1991, of the entire over-25 male population of the country, only 36% had completed four or more years of high school. For women? 41%.

So the idea that graduating form high school and going on to college is just this thing that everybody does and has done for generations just isn't so.

Nor am I comfortable with Sackstein's implication that the goal of education is a job. Even if that is the goal, lots of good solid middle-class jobs in this country required no college education. I graduated from high school in 1975 with plenty of folks who took a job on assembly floor of the local factory and made a fine living doing it. Contrast that with the many college graduates of today who are well-educated and unemployed.

I remain unconvinced that the point of a good education is to get a job. And that brings us back to the main question-- what does it mean to be an educated person, and how has that changed?

I do think that some aspects of Being Educated have changed over the long span. In particular, the scope of education has changed dramatically. If we go back a couple hundred years, we get to a time when an educated man (because, of course, an educated woman was just not a thing) like Thomas Jefferson could know a huge portion of everything there was to know. Even a self-educated man like Ben Franklin could learn most of All There Was To Learn.

That is no longer possible. An educated person can know a little bit about a lot of things, or a lot about a few things, but in the 21st Century, even our most well-educated citizens have giant gaping areas of ignorance, because we are humans limited in time and space and the amount of stuff there is to know is just too huge.

So one thing that has changed for an educated person is How To Retrieve Information You Don't Have. If you don't know something, how do you get that information? I belong to the last generation to be familiar with the Readers Guide to Periodical Literature. 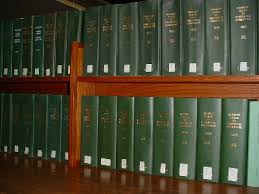 Yup-- if you are of a Certain Age, you used to see these rows of ick-green binders in your nightmares. If you are under, say, forty-five years old, you have no idea what the hell I'm talking about.

Not only has the process of information retrieval changed, but so has the emphasis. Back in my day, boys and girls, you would just search and search for a single source about your topic. I wrote a paper about Louis Raemaekers and every time i could find anything about him at all, it was a cause for celebration. But right now sitting here I can google him and get 76,300 returns. In the old days, the focus was finding, but today it is filtering. Any dope can find tens of thousands of sources about a topic, but an educated person has to be able to do two things-- ask the right question to narrow down the results, and sort out the useful returns from the internet crap.

Does that qualify as a fundamental change in what it means to be an educated person? I'm not sure. Sackstein asked her PLN to come up with some ideas of what an educated person is, and I disagree with lots of those, too.

Some of them, like Peter Huerta, a senior at WJPS, describe (disapprovingly) a system that is not about producing an educated person, but a trained one. If I teach you to have one approved response to one particular situation, that's not educating you-- that's training you. Are there far too many schools that are more interested in training than education? You betcha-- particularly because education reform has put all of the focus on training and nothing (except lip service) on actual education.

Any system that says that there is only one correct way to respond to X or do Y is not an educational system. It's a training system. Training has its uses, particularly if you are working with dogs or dolphins. But a trained person is not an educated person.

There's also the notion that an educated person is familiar with a particular body of stuff, an approved canon. This is a more classic definition of an educated person, and it has some validity, though you can be familiar with a whole body of great work and still be a dope. An educated person needs the raw materials, but an educated person also needs the mental tools to understand, apply, and draw conclusions about that stuff. This was what Emerson was railing about in his essay Self-Reliance-- that people were too caught up in just reading and parroting old dead guys and not actually thinking for themselves. Emerson's point was that you stand at a particular point in time and space and history that nobody else occupies, and therefor it is up to you in that moment to draw on your personal resources and understanding to decide what you should do.

So, educated person needs some tools, but also the mental muscles to put those tools to use, based on an understanding both of the tools and of the situation.

@pambradley offered "Knowing what questions to ask and how to find the answers" and I think that's definitely part of it.

@misswerner said  "being a righteous digital citizen and being a productive agent of change" and I'm thinking good heavens, no. Maybe the word "productive" is the safety here, but the internet is clogged with evidence that no education whatsoever is required to be a righteous digital warrior trying to create some change.

Problem solver. Independent critical thinker. Learner. Proficient in making sense of new experience. Able to see patterns. All good items for an Educated Person list, but are they new?

I'm not convinced that anything fundamental to being an educated person has really changed. Know a bunch of stuff. Understand how that stuff fits into larger patterns and pictures. Know what you don't know, and know how to find out the things that you need to find out. Have good skills for assimilating new information and experience, placing it all in a sensible context of what you already understand. Be an independent thinker and learner.

I don't see anything on that list that hasn't always been there.

New technology and tools make it possible to hit the items on that list in new and different ways. But the goals in using those tools seems, to me, to be the same goals we always had.

So on to Sackstein's second question-- should we be doing education differently? Again, yes and no. New tools, new techniques, but to the same fundamental end as ever. In fact, I think keeping the eye on the fundamental end part-- it's how we keep the technological tail from wagging the educational dog. The proper response to a structural change, a technological program, is not to ask "Is this new and cool" but "Will this help turn our students into educated people?" That is certainly the question that forms the basis for my rejection of test-driven school, Common Core standards, scripted classrooms, and computer-based "personalized" learning, as well as many other New Improved Ideas that have been pitched over the decades.

Public education has always lived with a huge tension between educating and training, with the division often blatantly sexist, racist and classist. She doesn't need an education; we just need to train her to cook and sew. There's no point on wasting education on Those Children-- just train them to be good manual laborers.

And, frankly, educating people is far harder than training them. In training, there's one correct answer and you're right or you're wrong. Education is about seeing all the possibilities. Training is about forcing students to look at just one. To the extent that we confuse training with education, we do need to change the education system into, well, an education system. But that's not a new thing-- we've needed to do that all along.
Posted by Peter Greene at Monday, June 13, 2016