We know the phrase "caveat emptor," rendered loosely as "Let the buyer beware."

If you are buying an authentic Rollex from a guy on a streetcorner, it's on you to make sure that it's an actual functioning watch. If you have bought a used car that turns out to be a four-wheel abomination, while there may be some lemon laws that give you a shot at recovering your losses, it's still on you. 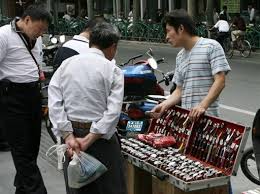 It's annoying for emptors to have to caveat. If you're buying a house and the seller says to your face when asked directly, "No, we never have problems with rainwater pouring down the driveway and into the garage," it's annoying that later, as you're shop-vacking the pond in your garage, you have to kick yourself for actually trusting a fellow human being. It's annoying to realize that you've been suckered by an advertisement that lies, and that the law says that the puffery was so obvious that it was on you to nkow that you were being lied to. It's time-consuming to have to examine every single thing you buy before you put down your money, and there's a certain slow-building corrosiveness to operating under the assumption that you can't trust your fellow humans.

I am always mystified by crooks, by people who make a living doing things like calling little old ladies and conning them into handing over their bank account information. There's something extra discouraging about having to explain to an older relative that she must stop trusting people, but should just assume that anyone who calls her on the phone is probably a liar and a cheat unless proven otherwise.

But we accept all of these things as the price of doing business in a messy, imperfect, human-inhabited world. Caveat emptor.

But we mostly don't expect to have to live by the phrase "Caveat civis"-- let the citizen beware.

Our elected officials, and particularly the people the hire to do the day to day work, who keep the wheels of government and cities and towns turning-- we're supposed to be able to trust those people. Yeah, we know the big shots may very well be crooked, and bureaucracy can be dull and thick-- but the rest of the government is supposed to keep things running smoothly.

We assume, for instance, that when we go to drive across a bridge, it won't collapse. We assume that large objects like cars have been checked by someone to make sure they won't kill us under ordinary circumstances. And we figure mostly when we turn on a water tap, the water will be fit to drink.

As much as we bitch about our government, we still trust it in the small-but-important ways. We expect the lights to be on. We expect the roads to be passable. We expect our currency to be worth something. And when things have been certified by The Authorties to be safe for our use, we assume they are so.

Betrayals like the discovery, first in Flint and now all over, that the water flowing from the tap is poisoned are doubly troubling because we trusted these guys. When we come home after a long, hard day of working and emptoring, we expect to come home to a place that by and large won't kill us. Nobody wants to live that vigilantly all of the time.

Of course, for people of color and people of poverty, it has been caveat civis for a long time. Their list of government officials, departments, and agencies that cannot be trusted is considerably longer than the list for the rest of us. I think a small portion of white resistance to seeing problems in our country with police is a gut-level resistance to seeing, to admitting that we are living more and more in a caveat civis world. But for some people, it's just caveat all day, every day. When we live with caveat emptor, that means vigilance and research, doing your homework and due diligence. Living with caveat civis is worse-- living on edge, on high alert all the time in a hostile environment.

This is one of the betrayals of the modern charter school movement. Schools should be a civis thing, a thing that is supposed to be done right for everybody, and parents and community folks are supposed to be able to trust when they send their kids to school. The school is not a commercial transaction, it's not a business-- there should be no caveat emptor written on the schoolhouse wall.

Charters cling to the "public school" label because it is a marketing dream. It co-opts the very nature of civis, and to the parent and community, it guarantees-- without ever saying so-- that it will be an institution that one can trust. For folks in poor, ill-served public schools, charters do not say, "We'll sell you a better product than you're getting from the government." No, charters say, "We will restore the proper role of the public school. You will be able to trust us in the way you always should have been able to trust the public school-- but couldn't." Public education opened the door to the modern charter revolution by our failures to keep our civis promise-- sometimes because we weren't given the resources, and sometimes because we just dropped the ball. Charters have promised to restore the promise of public education; instead, many have replaced that promise with a business transaction.


What nobody says-- and what everybody should say-- when approaching a modern charter school is "Caveat emptor." To the charter, you are no longer civis-- you are emptor, and it is up to you to do your due diligence. Charter fans scoot past this by emphasizing that parents should have lots of market information and data about the school so that they can do their appropriate caveating like good little emptors. And in the meantime, charters buy tons of marketing and advertisement, to do their best to obscure the hard data.

Instead of restoring the promise of public education, an institution where the civis isn't supposed to have to caveat, charter proliferation creates a chaotic marketplace (on display in places like New Orleans and Detroit) where emptors have to caveat constantly because they no longer have civis standing.

And parents never realize they've been snookered over into a caveat emptor situation (and it is further obscured by the fact that they don't personally pay for the product-- charters are happy to say that it's all free, just like a public school).

But caveat emptor it is.

This has been the slickest slight of hand that the charter industry has pulled off-- they have taken the responsibility for monitoring, maintaining, and overseeing schools from elected officials and their hired professionals and put that responsibility on the backs of parents themselves. In shifting schools from a shared civic good to a commercial product, they have snookered parents into the land of caveat emptor without ever saying so.

It is true that elected officials and their hired professionals did not always do an exemplary job. But the public knew how to find them, knew how to yell at them, knew how to light a fire under their collective butts. And what they were looking for was a school they could trust, a school where they didn't have to caveat a damn thing because people were doing their danm jobs. Now, if your charter school isn't living up to your expectations...? Oh, well. caveat emptor. You're welcome to vote with your feet.

There have been calls from some charter fans to ramp up the government oversight a bit. This is partly because charter fans are not all monsters, and also because they understand that too many spectacularly bad charters will destroy the most important marketing tool they have-- the belief of parents that they are still in a civis situation and not a caveat emptor situation. The charter industry already shows the signs of a non-functional free market in the cyber-sector, where schools are universally failing, but are still turning a profit because of favorable lobbyist driven rules and a steady supply of parents who still think, "Well, it's a public school, so surely someone is making sure it's legit." If the invisible hand worked, cyber charters would be almost entirely gone. They are still thriving.

In a well-run, just and decent society, there should be large sectors where caveat emptor is never heard. Caveat civis should never, ever be heard. This is not just a matter of justice or fairness. It's a practical conern for leaders, because if caveat emptor gives way to too much caveat civis, the next thing you're liable to hear is caveat rex-- let the rulers beware.
Posted by Peter Greene at Tuesday, June 28, 2016