He took to one of his blogs to extol the virtues of chickens as engines of economic improvement for the Very Poor of the world. In fact, he's pretty sure that the Poor Folks should be raising chickens; he's pretty sure it's their path to a better world.

When I was growing up, chickens weren’t something you studied, they were something you made silly jokes about. It has been eye-opening for me to learn what a difference they can make in the fight against poverty. It sounds funny, but I mean it when I say that I am excited about chickens.

Well, no. It sounds funny if you are a lifetime privileged rich white guy who occasionally takes little philanthro-tourist trips to Poorville. "Look, Melinda! They really do eat some of these things. And-- goodness-- I don't think they have any running water here! Imagine!!" Yes, life is rough in Poorville. It's almost enough to make a person wonder why poor people choose to be poor!

So Gates decided to give chickens to the Very Poor of the world. I found that an interesting logistical issue. Where does one get hundreds of thousands of chickens? How does one ship them all around the world? How does one distribute them when they get there? How will the Very Poor, who have trouble feeding themselves, feed the chickens? I'm curious about how this will actually work.

But the government of Bolivia isn't curious. It's pissed off. 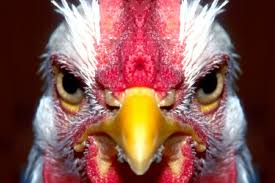 As initially reported by Reuters and as picked up by every news outlet that wanted to A) poke fun at Bill Gates and B) wring some kind of hilarious headline out of the story, the Bolivian government revealed itself to have a little local pride:

"How can he think we are living 500 years ago, in the middle of the jungle not knowing how to produce?" Bolivian Development Minister Cesar Cocarico told journalists. "Respectfully, he should stop talking about Bolivia."

Bolivia's agricultural department says that the country produces 197 million chickens annually and has the capacity to export 36 million. Bolivia's economy has almost tripled in strength in recent years, though Forbes says the country has a lower GDP than every state except Vermont.

No other chicken recipients have rejected Gates' offer, but the Bolivia flap underlines again the problem with the Bill Gates approach to fixing the world-- decide what other lesser people need, and spend a bunch of money to get it to them. Go ahead and skip the part where you actually talk to them about how you could best help them. And don't look at any of the systemic reasons that they need any sorts of things in the first place.

I mean, I can't look into Bill Gates' heart. I don't know him. But I have to wonder-- when he's playing with things like chicken charities, does he ever consider with wonder or amazement or gratitude the circumstances that made him rich and other people poor, or does he just see that as how the cosmos administers justice to the deserving and the undeserving? Does he think, well, raising chickens is so economically responsible that even a rich guy like me should do it, and so he builds a chicken coop in the back yard and stops buying factory farmed chicken? Does he see the wall between himself and the less rich people of the world as a proper part of a just and orderly world, or does he contemplate how to knock that wall down.

And of course the chicken story evokes all the feels to those of us in education because it seems.... familiar. Kind of like the time Gates decided what the public education system needed without ever talking to the people who live and work there. Of course, we've been trying to tell him where to stick his chickens, but he hasn't listened to us, either.