A few days ago, I quoted Thomas Kane's bizarre observation about teacher training:

Surgeons start on cadavers, not on live patients.

I observed that it would be hard for teachers to start working with cadavers, but a couple of regular commenters reminded me that, in fact, there are teachers out there working on not-exactly-live students. Ladies and gentlemen, it's TeachLivE

This particular example comes from Pace University School of Education (a reasonably reputable school), but TeachLivE is actually a product of the University of Central Florida. TeachLivE bills itself as " a mixed-reality teaching environment supporting teacher practice in classroom management, pedagogy and content" and I have to take my hat off to the word "mixed-reality" because it seems so useful when discussing education reform.

But UCF was creating this Classroom of the Living Dead all the way back in 2008. Today they boast a presence in 85 different programs.

How does it work, exactly? Well, EdSurge actually did a review of the program, and that yields a few interesting details (though the undated review is from 2013 when TeachLivE was in 37 programs). The program is, of course, a simulation. It was not browser based and required a Kinect cable to "read" the teacher (that's the mixed in the mixed reality-- the students are fake but the teacher is real). Programs would contact the TLE folks two weeks ahead of time with what they wanted to practice with the cyber-students, and the a "custom" simulation was prepared. Students can be programed for varying levels of non-cooperation.

Teachers get back a report on the sorts of things you would expect a computer program to be good at recording-- wait time, teacher talk vs student talk. Plus a rating of just how well the teacher kept the students under control.

Limitations? Well, the simulated class can't go above five students. The teacher cannot throw a student out of class, but in one of my favorite techno-glitches, EdSurge reports that when there's a technical errors, a student avatar will ask to go the bathroom and then stay there. There's also the limitation that the avatars look like creepy siblings of Sid from the first Toy Story. And the practical limitations-- one of the best classroom management techniques is proximity. But you can't go stand behind the robo-student on the screen. Cost in 2013 was $20 for 10 minutes.

Biggest limitation? The behavior of the simulations themselves. The basis for the sims is a bit of a mystery-- several sources cited the work of psychologist William Wong-- but I can't find the guy.

Any practice classroom experience is only as good as the fake students in it. Back when I was in teacher school, we would teach practice lessons and my professor Dr. Robert Schall would sit in the back of the room as Bobby. Oh, how we all hated Bobby, but we all learned to appreciate him because Bobby was a pretty accurate version of That Kid in your class. He was an accurate simulation.

But TeachLivE is, let's face it, a big computer game, and that means it reflects the preferences and beliefs of its programmers. If we watch the clip above, we can see that the programmer has one idea about the correct way to handle a middle school girl with a cell phone. Like any video game, the programmer chooses a correct response to a situation, and if you provide the correct response, you get a reward. But if I'm playing Lego Batman, I'm playing in a made-up world that programmers built from scratch. In a simulation like TeachLivE, the simulation is only as good as its faithful representation of the real world.

Now, maybe the University of Central Florida has developed the technology to create a fully realistic artificial intelligence that can faithfully pass for a human child. However, if they had managed the feat of an actual human AI system, I have to believe that they would be doing something with it other than classroom sim games. So I'm going to guess that the students in Uncanny Valley Elementary School have some considerable limits, and that much of the simulation is going to be defined by the programmers' beliefs about how you're supposed to teach students in the classroom and how students should react. In other words, if the programmers believed that a cell phone problem is best solved by telling the student, "Put that away or I will punch your ugly face in," that is what would work in the simulation.

Given that, I would want to hear an awful lot about how the avatar programming is based on a collection of child development experts and experienced classroom teachers. But nowhere in the accounts of TeachLivE do I find any such thing.

"Well," you may say, "That's no big deal. It's just a tool for a little simulated classroom practice. Just the thing to give some practice to a proto-teacher who's not quite ready for prime time, yet."

And I would agree with you. But that's not the end of the TeachLivE story.

By 2012, TeachLivE was attracting plenty of attention, particularly because they are pretty much the only outfit doing this kind of teacher simulation work. The Bill and Melinda Gates Foundation gave TeachLivE three $1.5 million grant. And then, as that grant was running out in 2015, TeachLivE went private. UCF entered a "public-private" partnership with a San Francisco startup called Mursion, an outfit that promises "the virtual training platform where professionals practice and master the complex interpersonal skills they need to be effective in high-stakes careers." How does a startup find the money to buy up a well-established cutting edge operation like this? Simple-- they were given $1 million by the New Schools Venture Fund (everyone's favorite education venture capitalist investment group). And in April of this year, ASCD (formerly the Association for Supervision and Curriculum Development) announced they were partnering with Mursion "to develop leadership institutes that leverage simulations in virtual reality."


And that's not the worst of it. ETS has also boarded the TeachLivE train. The Education Testing Service has teamed up with TeachLivE to create "summative assessments" to be part of the ETS NOTE system, another entry in the teacher licensure wars. Yes, to earn teaching certification, some teachers will have to face a classroom of five creepy-looking computer programs. No word yet on whether or not they will also have to clear at least five missions in Grand Theft Auto. 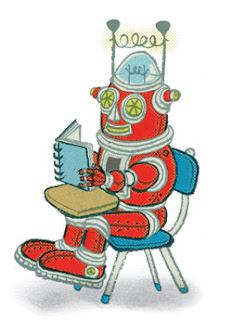 Is TeachLivE the Worst Thing Ever? No, but it is a display of some of the worst tendencies of the reformster movement. Let's create something that might have a little utility. Then, because we want to scale up and expand the market for the product so that we can generate some revenue, let's double down on a seriously over-simplified and narrowed view of what teaching actually is, and then grossly over-promise what the product can do and start applying it to tasks for which it is not fit. It could be useful, but it's being turned into a menace.

There is some limited usefulness for a quintet of robot children, but making them the gateway guardians for the teaching profession, or a substitute for dealing with real, live humans-- those tasks are beyond their abilities.

And it's not like there aren't real, live human children available in the world. Yes, giving proto-teachers all the responsibility is problematic-- children should not be guinea pigs (well, unless we're exposing them to untested policies, standards, and tests-- then, apparently, it's okay). But there are many situations, manners and modes for proto-teachers to interact with small humans that will provide ample opportunity to learn how tiny humans think, act, behave and react-- exactly the things future teachers need to know and which they cannot learn from robot children.

Posted by Peter Greene at Tuesday, June 14, 2016
Email ThisBlogThis!Share to TwitterShare to FacebookShare to Pinterest