Such a Short Time

I started the day yesterday playing with the town band that I belong to. We play for folks running a local half-marathon that's held in memory of a local state policeman who was killed a few years ago responding to a domestic violence call. A man had finally taken his spousal abuse one step further and killed the woman. When the trooper responded to the call, he was shot down as he approached the house. Now, every year there's a race held in his memory. As the runners come close to the turn around point, we're there playing an assortment of marches and polkas. It's not a lot, but it adds a little something to the event.

Later in the day, my wife and I attended the wedding of a pair of close friends. The ceremony was at a chapel in the woods, where the bride's parents had said their own vows thirty years ago. As with the best weddings, there was a wide assortment of friends and family there, sharing and eating and being together to celebrate the joining together of two lives. The whole business was held on several acres of country campground, next to a creek, with several ponds and surrounded all around with trees, forest, hills. The couple came together through acting in local theater, so those of us who are their theater friends have known them since the days they first became a couple, watched them do that dance.

My son, his fiance, and their dog had come up. They spent some time visiting with his mother, who was in town visiting my ex-father-in-law, who is feeling his age these days. He sent word to me that I should slow down and work less. I was up late spending some time with son, fiance and dog, and then, because I am apparently no longer able to sleep in ever, I was up at the usual time this morning.

Ordinarily I would spend the time writing, but the house was full of people, including two dogs who are still negotiating their relationship, so I took my dog (who wakes up the instant I set foot on the steps, and took him on a walk down through the back yard and a block or so upriver to a park, where we just sat. I have bragged about where i live before, and I will do so again, now, with pictures. 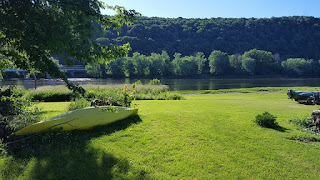 Walking down to the river; this is my backyard 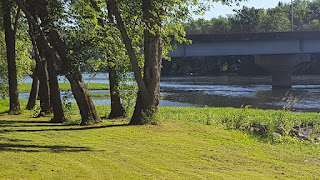 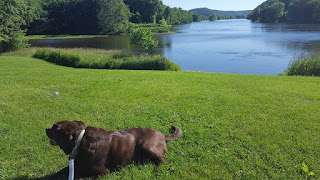 Hanging out in the park 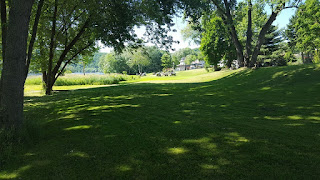 We're close to the center of town, so as I sat on the bench, I could hear the courthouse strike the hour and hear church carillons play hymns as services started. I look at the water, looking for the places where islands and sand bars have grown or shrunk since last year, because I kayak on these waters along the same followed by Native Americans hundreds of years ago. Where I'm sitting is close to where both the French and the British built forts to support their colonial ambitions; as I tell my students, the very peaceful and safe place that we now occupy was once a sort of war zone, a dangerous place to live, in fact a place where many people died violent, ugly deaths. That was long ago. Now it's just grass. The sun was warm, the breeze was cool, and the dog was glad for some quiet.

I was thinking about the previous day's events, about how my own family has taken on a widely different configuration from what I once imagined it would, and took out my phone to look at pictures from the wedding.

It was at that point that I began to learn about the events of Orlando last night, about the terrible toll in human life taken by one screwed-up sonofabitch with a single powerful tool aimed at people who just wanted to enjoy their own safe place, people for whom, because of their status in our society, safe places are too few and too far between. Like most Americans, I was immediately sad about the events and weary about the inevitable arc of the day-- some people would say moving things, some would say stupid things, and some would be at a loss for words. At this point, the Facebook postings are rote-- the Onion article, the Fred Rogers quote, the offers of prayer, the angry reminders that prayer should be a spark for actual action, not a substitute for it. The story will dominate the news cycle until our goldfish attention spans move on.

But the words that most struck me today were those of the mother, Christine Leinonen, waiting for news of her son. "We’re on this Earth for such a short time," she said. "Let’s try to get rid of the hatred and the violence." Reminiscent of Vonnegut's, "God damn it, you've got to be kind.” But really more to the point.

The biggest challenge, the greatest puzzle, the hugest task we each face in our own particular lives is to solve the mystery of how to be fully human in this world, how to be fully ourselves. It is a damned big challenge, like trying to juggle a group of fretful lions while riding a unicycle atop the surface of a planet that keeps shifting and drifting and tilting beneath our wheel, and surrounded by others trying to master the same feat-- some happy about it, and some deeply angry.

Our responses as humans to that challenge have been many and varied. Some believe they sense a deeper intelligence, a gentler or angrier hand behind all of the struggle. Some think we're all teammates trying to meet the challenge together, while others believe it's a contest, a competition that only some will win. And when some hit the ground, hard, it runs across the surface with a tilt and shake that we all feel.

How to be fully human in the world, fully ourselves, is the hugest puzzle and we have such a short time to solve it, even in part. I've had fifty-nine years to work on it, and I've wasted a lot of that being a fool. But I feel pretty certain of a few things:

1) One of our jobs in this world is to look out for each other.
2) Anyone who says the solution is simple is either a fool or they're trying to sell you something.
3) Education is about giving young humans the tools to find their own answer to the puzzle, which makes it among the most important, most complicated business on earth.

This is what is behind pretty much everything I've ever had to say on this space. In a world where our most enduring and moving and beautiful moments are the ones where we celebrate how we are connected, how we come together to draw strength from each other as we find our way in the world, and where the most horrifying and terrible moments come out of the times when we fail to make those connections and fail to support each other in the most fundamental ways-- in that world, do not tell me that the most important thing I can do for a student is to help him or her get a better score on a crappy reading test. This is the note of incredulity that I often feel compelled to strike-- you can't be thinking about anything important when you say that, because if you were focused on Main Thing, you would know how ridiculous you just sounded.

It is so easy to lose the thread, to be so focused on how our left foot is resting on the pedal of the unicycle, that we lose the bigger picture, the Main Thing. We get so distracted by such petty shit. We take so many things Very Seriously that just don't deserve it. And we all need to take a moment to regain our focus. Walk your dog. Hug your kid. Feel what you have to feel. Instead of trying to make someone smaller, try to make someone bigger, in touch with their own strength and best nature. That's part of looking out for each other-- helping each other remember the Main Thing, focus on the Important Stuff, help each other be more fully human, more fully ourselves in the world.

Such a short time. Each day has to count.

Posted by Peter Greene at Sunday, June 12, 2016
Email ThisBlogThis!Share to TwitterShare to FacebookShare to Pinterest