I don't think there's ever been anything like it. 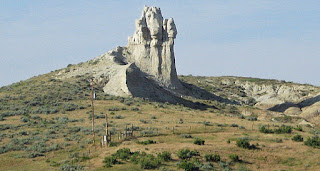 Well, maybe Teapot Dome, kind of. Back in the early 1920s, the feds had special oil reserves set aside for the Navy. One was near Teapot Dome in Wyoming, and during the administration of Warren G. Harding, some folks engineered the oil reserves at Teapot Dome being handed off to the department of the interior. But since Secretary Albert Bacon Fall had been fully bought by Sinclair Oil, he quickly and quietly turned over what was supposed to be a public national resource to a private company in a secret-ish no-bid process that let the oil go for so little money that it could hardly be called selling it.

Imagine. There was a time when that sort of thing, with public officials bought and corrupted by private interests giving away public resources, was actually shocking.

This, of course, is not new. Broad long ago decided that education would be better run by people with a business background, not an education one, and so he set up Broad Academy, a-- school? program? thingy?-- that finds the Right People, puts them through some edu-business training, and declares that they are fit to be superintendents because Eli Broad says they are. It is an amazing piece of ballsiness, as if I set up an Officer's Training School in my back yard and started issuing certificates declaring my graduates were First Lieutenants in the US Army. Well, it would be like that if I were really, really rich and well-connected and managed to convince the US Army to let my trained "officers" actually take command. But this is the guy who literally wrote the book about how to shut down a public school system and replace it with privately operated charters.

Broadies have been put in place in districts all around the country. And what we saw in Kansas City, when Broad picked up the phone and told John Covington that he was going to Detroit, is that the Broadies do not work for their local district-- they work for Eli Broad.

But more than spreading his own shadow education system across the country, Broad seems to be interested in simply taking over the Los Angeles school system.

Installing Broadie John Deasy as superintendent seemed like a great step forward, but Deasy just wasn't very good at the job, and his mis-steps and failure and departure became a national news story, as well as helping to fuel the ouster of reformsters from the board.

So Broad has regrouped with a new plan. Last summer, his foundation announced a plan to dramatically increase the number of charter schools in LA and commandeer half of the students in Los Angeles. To help push that, he cobbled together a group named Great Public Schools Now, a collection of reformsters including many not even from LA who just wanted to go ahead and direct education policy in LA, even if nobody ever elected them to do so.

The LAUSD school board was not impressed, and voted 7-0 to oppose the Broad takeover plan. But GPSN was undeterred and this week released the new, improved version of their plan. What's changed? The Broad front group is willing to grab every conceivable type of school. They want to "support" not just charters, but public schools, magnet schools, any kind of school they can get their hands on. The new plan is notable for a complete lack of details, but they are targeting ten particular neighborhoods in LA-- all poor, of course. Announcing that you wanted to take over the schools in wealthy neighborhoods would get you too much pushback from people who actually matter.

I suppose it's a little like a hostile business takeover, where one company uses superior power and wealth to conquer and absorb another company's assets. But we're talking about a public resource, not a private asset, so it's not quite analogous. Setting up shop in Yosemite and declaring yourself the governor of a new fifty-first state? Maybe walking onto an army base and saying, "I am now the general in charge of this base and these troops. Yes, I have a commission-- I signed it myself."

Broad is attempting a modern Teapot Dome, a combination landgrab, resource theft, and bloodless coup. It is astonishing in its audacious disregard for the public, the poor, elected officials, the rule of law, and the entire institution of democracy, and Broad is not even trying to be sneaky, which may be part of his secret-- when you see somebody breaking into a car in broad daylight on a crowded street, you assume that it must be his car because otherwise why would he break into it right in front of God and everybody?

This is reformsterism at its baldest and worst, disregarding democratic process and treating the non-wealthy and non-white as fodder for grabbing power and money, with barely a vague educational justification in sight. Just "I want to see things done a particular way, and all these various people and organizations are obstacles, so I'm going to clear my path because I want to and I'm rich and I can." Good luck to the folks in LA.


Posted by Peter Greene at Thursday, June 16, 2016
Email ThisBlogThis!Share to TwitterShare to FacebookShare to Pinterest