There Is No Teacher Shortage

I've made this point a dozen times in other contexts, but let me take a day to address it directly.

Oh, across the nation there are districts that are having trouble filling openings with fully-qualified certified teachers. But there is no teacher shortage. 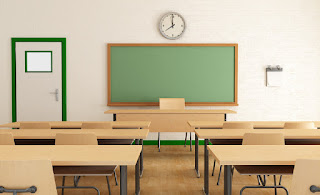 "Shortage" implies a supply problem. Like maybe people are born teachers and for some reasons, the gene pool has just stopped coughing out people with the special teacher genetic code. Or maybe the colleges and universities just aren't recruiting and educating enough proto-teachers. Or teachinmg is a "calling" and apparently there just aren't that many people being called. Or maybe all the teachers are falling through a black hole into that dimension where all the lost socks go.

"Shortage" also gives folks permission to plug the gap with "alternatives." If there "aren't enough teachers" to go around, then we'll just have to hire Ivy League Teach for America temps with five weeks of training, or loosen requirements so that anybody with a degree (or even with just a diploma) can be put in a classroom. Or we can bring in one of those artificial intelligence computer programs to do the work of teaching. Of course, none of these sound optimal, but we don't have much choice because there's a teacher shortage, donchaknow.

The idea of a teacher shortage feeds into the notion that teachers can only be found in classrooms-- in other words, teachers aren't human beings qualified to teach who may or may not choose to put those qualifications to work in a classroom.

Teachers are people with a choice. Hmmm....

I believe in a different explanation of why so many school systems are having trouble finding qualified people to fill teaching positions. And free market fans should be there ahead of me.

After all, we've heard the argument about why there is no need for unions, no need even for a minimum wage. If you offer too little pay or benefits for a job, the argument goes, people will just walk away from your job until you make a decent offer. Right? I've said it a dozen times: if I can't buy a Porsche for $1.98, that doesn't mean there's an automobile shortage.

If you think that workers should handle bad working conditions by walking away, you cannot be mystified when a whole lot of workers start walking away from a particular job.

For almost twenty years (at least) the profession has been insulted and downgraded. Reformy idea after reformy idea has been based on the notion that teachers can't be trusted, that teachers can't do their job, that teachers won't do their jobs unless threatened. Teachers have been straining to lift the huge weight of education, and instead of showing up to help, wave after wave of policy maker, politician and wealthy dilettante have shown up to holler, "What's wrong with you, slacker! Let me tell you how it's supposed to be done." And in the meantime, teachers have seen their job defined down to Get These Kids Ready For A Bad Standardized Test.

And pay has stagnated or, in some states, been inching backwards. And not just pay, but financial support for schools themselves so that teachers must not only make do with low pay, but they must also make do with bare bones support for their workplace.

And because we've been doing this for two decades, every single person who could be a potential new teacher has grown up thinking that this constant disrespect, this job of glorified clerk and test prep guide, is the normal status quo for a teacher.

Teachers have been systematically distrusted, unsupported, and disempowered. Not in every school district in America-- but in far too many.

There's a slow motion walkout, an open-ended strike that's hard to see because teachers are walking off the job one at a time.

There are plenty of people who are qualified to fill the positions, plenty of people who could enter a teacher prep program and join the profession if they were so inclined. I'm surprised to see that there's no good count of all the teacher licenses sitting unused, but simple math tells us that it is the number of people who have left, plus the number of people who gave up before they got a job, plus the people who graduated with a certificate but took another job and never came back, plus all the people who just decided not to even start down that path. Undoubtedly some of those people were ill-suited for the classroom and we are better off without them. But that can't be every person whose teacher papers sit gathering dust.

People have a choice. Sometimes we talk about Teaching, The Calling, as if teachers have no choice but to become teachers. This is just the less insulting version of "Those who can't, teach." It's comforting to the People In Charge because it imagines a negotiation where they have teachers over a barrel, where teachers can't walk away because they must teach. But people have a choice. They can choose to be a teacher, or they can choose-- even if they choose reluctantly and painfully-- to not be a teacher.

If entry-level pay were $100,000, with top-drawer medical coverage and a kick-ass pension, we would never have to talk about teacher "shortages" ever again. But instead, states and districts play a game where they see just how little they can put into making the job appealing without feeling the pinch-- and then when they start to feel the pinch, they pretend not to know what the problem is. In some states, they set up commissions to "research" the problem and make recommendations, which require about as much wisdom and insight as telling a hungry person that you recommend that they eat.

It doesn't help that lots of folks keep hollering, "More money??!! Are you nuts? We already spend a whole bunch of money on schools! Teachers already make way more than clerks at the 7-11!" And this just adds to the aura of disrespect hovering around teaching, even as it involves a bunch of free market conservatives pretending they don't know how the market works. (Review: Will the dealer not sell you a Porsche for $1.98? Then you need to offer a better deal.)

There is no mystery to what is happening, but to deal with effectively, to actually face it, the People In Charge need to stop calling it what it is not.

Posted by Peter Greene at Tuesday, January 29, 2019
Email ThisBlogThis!Share to TwitterShare to FacebookShare to Pinterest