Mexico: How Bad Can the Ed Debates Get?

I try to be careful with word choice. I've been reluctant to call the reformster-driven ed debates in this country a "war" or even an "assault" because when we inflate the nature of some conflict, we dilute the meaning of words, words that we may need when something that does more closely resemble an actual war, with fighting and shooting and killing. Which takes us to Mexico. 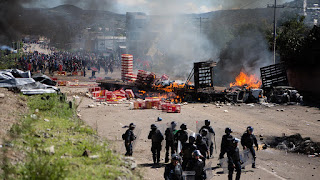 Negotiation? Strike? I'm not sure we have any English words for a teacher protest that really rise to this occasion


Reformsterism is, of course, not strictly a USA phenomenon. Lots of nations are experiencing the loving embrace of neo-liberalism and the attempts to create a test-centric school system that puts teachers in their place. But in Mexico, leaders have stopped acting like reformsters and started acting like gangsters.

Before I dig in, I do want to be clear on one point-- I have been trying to make sense of ed reform in the US for roughly 1800 posts over three years. I am now going to address Mexico in just one post. Corners will be cut in discussing what is clearly a complex situation. If this moves you to a high level of concern, I suggest you do what I'm doing-- start reading and then go find some more stuff and read that, too.

Mexico has everything other reformster-infected countries have-- but they have everything on steroids.

Educational crisis? Yup. Writing about Mexico repeatedly points at their PISA scores, and while I'm not deeply respectful of the PISA's diagnostic value, Mexico is almost dead last among members of the Organization of Economic Development and Cooperation nations. Mexico also has one of the highest dropout rates in OECD nations. And while their ed spending as a budget percentage is high among Latin American nations, it has the highest student-teacher ratio of OECD countries and spends less per pupil than any other country. I don't consider any of those data points critical measures of education excellence, but it's pretty hard to look at Mexico's whole picture and think, "Well, yeah, it could still be a great education system."

The country was pretty sure that Something had to be done. But the Something they picked was a pretty direct run at the teachers' union of Mexico, and that may not have been a great tactical move.

See, the teachers' union in Mexico is a bit different from ours. It's large, and it's powerful. You've got the National Union of  Education Workers, and then you've got the more radical lefty arm of that union, known as National Coordinator of Education Workers (CNTE). The union has traditionally exercised plenty of control over not just wages, but also hiring and firing. In the horror stories that union opponents like to cite, teaching jobs have been both sold and passed down through families (so, kind of like political positions in Chicago). That may seem like a lot of teacher union power. On the other hand, if the country can't get its act together to run a school system, who better to get things organized than the actual teachers. And how did we get to place where it seems crazy that teachers have a major say in who gets to be a teacher. It seems believable that some corruption had crept into the system, but given that Mexico is ranked one of the 75 most corrupt countries in the world, that's not entirely a shock.

But the union, particularly the CNTE, has also been a powerful political force. Ten years ago teachers in the southern state of Oaxaca led a massive civil disobedience movement to push back against government abuse and police violence. In a country without much organized opposition to government authority, teachers in Mexico have often emerged as a powerful force standing up for citizens.

So as always with education reform, Step One is "Establish a crisis." And for Mexico, establishing a crisis was not a huge stretch. The important question is how to respond to that crisis.

In 2010, the OECD offered up a plan of its own with fourteen recommendations. Eleven of them were focused on setting standards and training for teachers and school leaders. One was about school autonomy, one was about local school councils, and just one noted that since schools were getting pretty much no funding, the government might want to look at that, too.

So, would the government address any of its school system financial, infrastructure, crowding or resources issues? Well....

President Enrique Peña Nieto signed a law that took control of teaching away from teachers and threatened to remove tens of thousands of current teachers. In particular, it linked teachers' continued employment to measures of their effectiveness derived from student standardized tests. Yes, the government of Mexico decided to VAM its teachers into submission. The proposed law didn't address any of the other issues facing Mexico's schools, from funding to overcrowding to resources-- just the teachers. The bill signed by the president still had to make it past a Congressional rewrite to finally become law. And they were not prepared to have a spirited and respectful conversation about it.

The very next day, government arrested Elba Esther Gordillo, head of the teachers union for over two decades and one of the most powerful women in Mexico. "La Maestra" was certainly not subtle (e.g. reportedly giving away brand new Hummers to regional union leaders in exchange for their loyalty), and she was certainly not universally beloved. But in Mexico, politics is hardball, and the teachers union is essentially one more political party.

The implications of VAMming set in immediately. Standardized tests correlate to income, and students in the poorest parts of the country would fare the worst, meaning their teachers would be axed by the hundreds-- a prospect that was particularly bad to contemplate in those poorer communities where teaching jobs are often an economic anchor.

In September of 2013, the law cleared its last hurdle, and teachers fought back.

"Fight back" in Mexico is not figurative language. In the last two decades, one can find innumerable examples of citizens being shot down by state police forces for protesting government actions.

In 2014, forty-three students on their way to a protest were kidnapped and most likely killed (this after a harrowing chase in which two students and three bystanders were shot dead). Official interest in solving that mystery seemed to fade as more and more evidence pointed toward government forces as the kidnappers.

The government has balked on implementing the 2013 law in the face of continued pressure, strikes and protests. But it has also stepped up propaganda push, singing a refrain recognizable to folks on the receiving end of ed reform the world over-- the schools stink, and it's the fault of the teachers and their unions, so we need to get rid of all the bad teachers, which we can do by using student test scores, and once we do that, schools will be awesome and the economy will totally improve. And the government party, thrown out of some states like Oaxaca as a result of teacher union action, has regained control of some elected offices.

That brings us to the new round of clashes in Mexico from last week. Once again, things have become alarming:

On Sunday night, June 12, as Ruben Nuñez, head of Oaxaca’s teachers union, was leaving a meeting in Mexico City, his car was overtaken and stopped by several large king-cab pickup trucks. Heavily armed men in civilian clothes exited and pulled him, another teacher, and a taxi driver from their cab, and then drove them at high speed to the airport. Nuñez was immediately flown over a thousand miles north to Hermosillo, Sonora, and dumped into a high-security federal lockup.

Just hours earlier, unidentified armed agents did the same thing in Oaxaca itself, taking prisoner Francisco Villalobos, the union’s second-highest officer, and flying him to the Hermosillo prison as well. Villalobos was charged with having stolen textbooks a year ago. Nuñez’s charges are still unknown.

The kidnappings came the day after President Nieto issued this statement:

The Government of the Republic repeats that it is open to dialogue only when they comply with two conditions: returning to work in the schools of Chiapas, Guerrero, Michoacán, and Oaxaca, and accepting the Education Reform.”

From there, it has only gotten worse. The union has been blocking roads in Oaxaca, and government forces have replied with a show of force. Six people have been killed, 100 injured (there are conflicting reports on how many of those six were teachers). That was yesterday.

There's no question that the relationship between the Mexican teachers union and their government is complicated, and also no question that there are plenty of Poor Choices on all sides. But when you reach the point that you are dealing with the teachers of your nation by kidnapping and killing them, you are failing, and failing hard.

So this is what an education war really looks like. Fire and destruction and people killed because they choose to take a hard stand for their profession. And this is how far some reformsters are willing to go if it won't cost them any PR to do it. This is how badly they want to remove teachers as a political force so that they have a clear chance to do with public schools what they will (other than, of course, actually make an effort to invest in their improvement). This is how bad the education "debates" can get.


Posted by Peter Greene at Monday, June 20, 2016
Email ThisBlogThis!Share to TwitterShare to FacebookShare to Pinterest