Charter vs. Charter Fight Heats Up

Earlier this week we looked at a report co-created by the National Alliance for Public [sic] Charter Schools, the National Association of Charter School Authorizers, and 50CAN in which the bricks and mortar wing of the charter school industry took the cyber-charters to task for stinking up the whole charter sector, and very helpfully offered some advice that involved a whole lot of restrictions and rules that cyber charters should have to follow.

It did not take long for the cyber charter industry to fire back.

K12 Inc, one of the very largest cyber chains. It was founded by banker and McKinsey alum  Ronald Packer and got its initial stake from Michael and Lowell Milken (Michael is famous as the junk bond king who went to prison for fraud) and also a chunk of change from Andrew Tisch, big cheese at Loewe's (his wife served on the reformy Center for Education Innovation board and opened an all-girls school in Harlem in the late nineties). In addition to running their own cyber-empire, K12 has also been the force behind spectacular cyber-failures like the Agora cyber charter chain. Oh, and they are fully unabashedly for profit, like most of the cyber charters. 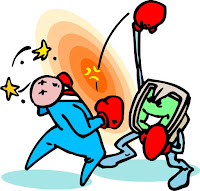 K12 Inc did not much care for the Cyber Shape-Up report, and they issued a press release to say so.

"Not collaborative," they say of the report. Nobody invited cyber-charters to come participate in the scolding of cyber-charters. Speaking for most public school teachers of the last decade, let me just express our sympathy for how annoying it is when people want to attack your work without even talking to you.

K12 also attacks the study that is most of the basis for the scolding of cybers because the data is old and doesn't include points that the cybers think are important (like why the student left her original school). K12 claims that at least one cyber school in Ohio is had some really good data a year ago. So there's that.

"Most troubling" is the reports call for an end to open admissions. The report suggested that only students who demonstrated the factors linked to cyber-school success (self-motivation, involved parents) be allowed to enroll. But K12 argues forcefully for open enrollment with the usual bogus claim to being public schools.

They should be open to all eligible families and every child should be treated equally. Policies that restrict parent choice, or create perverse incentives for schools to turn away at-risk children or others deemed not to likely to succeed, should be rejected.  They have no place in the school choice movement.

Actually, I agree with all of that-- and it's a nice shot from K12 at the brick-and-mortar schools that with few exceptions do take steps to control exactly who gets into them, from the Got To Go lists of Success Academy to them many cities where only actively involved and motivated parents can hope to navigate the "lottery" process.

K12 argues that many students "fleeing" their public school have no other choice but cybers, which underlines that cybers have been a great way in states like mine to extend charter reach into markets that could never sustain a brick-and-mortar charter. It also sidesteps the larger issue of what a lousy job cybers actually do for those students. But never mind-- charters want to make sure they can pack students in.

In fact, packing them in is the business model, as well as packing in lots of at-risk students who don't expect much form school (and remember-- you only have to keep them on the rolls until counting day). In fact, K12 is a bold choice to speak up in defense of the cyber charter industry, because you can follow links to K12 horror stories all day (if you want to play that game, just start with the two articles linked in this paragraph).

K12 goes on to make their goose-and-gander point-- if the accountability measures advocated are good for cybers, then why not apply them to all charters? And at this point, K12 has smoothly slipped right past other issues raised by the report, like the gross overpayment of cybers.

But K12 is now reduced to the vaguest and thinnest of defenses-- we work hard For The Children, and we are totally working hard to "meet these challenges." Also, look at all the teachers we have employe4d, jobs we have created, and students we have shoved through graduated.

It's pretty weak sauce, but it does signal that the cyber-charter industry is not just going to knuckle under their bricks-and-mortar brethren, nor are they going to 'fess up to their increasingly obvious failures. But if they are going to just keep stinking up the charter school business, the bricks-and-mortar charters will just have to come after them with a bigger stick. I would just settle back with my bag of popcorn, were it not for all the real, live students who will continue to be collateral damage in the cyber-battle to keep a bad business model afloat just so some rich guys can get richer.

Posted by Peter Greene at Saturday, June 18, 2016
Email ThisBlogThis!Share to TwitterShare to FacebookShare to Pinterest