Pennsylvania now has a formula for distributing education dollars to school districts.

You will notice that I didn't say "new formula." That's because, contrary to what rational human beings might assume, Pennsylvania hasn't had a formula for decades. Well, that's not exactly true. The formula has been Y times some-percent-usually-less-than-two of Y, with Y equalling "whatever you got last year." And this process, called "hold harmless" in PA, has been in place since around 1991. We fiddled with it a bit from 2008-2010, but it's only sort of an oversimplification to say that the foundation of our funding system has been 1991 enrollment figures. 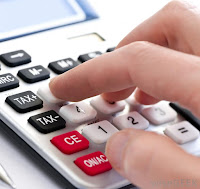 And it needs to be noted that since Pennsylvania ranks 44th in the percentage of state funding for public ed (36% overall), state funding is not critical for all districts. Districts that are able simply make up that difference locally. Districts that are not able just become increasingly poor and financially distressed. On top of that, add a mismanaged pension system that now has huge balloon payments come due, a charter reimbursement system that rips the guts out of public school funding, and an unregulated charter system that lets those charter claws reach the guts of even small rural districts. Also, a few years ago we totally used that stimulus money to replace the regular education budget funds, which meant that the end of stimulus funds left a huge hole in school funding. Oh, and last year when we couldn't settle a budget for nine months (ten, really, by the time we were done with the details)-- that didn't exactly help, either. Fun fact: back in 1971, the state was providing about 54% of public school funding. We've been in free fall ever since.

The effect is also that we have major school finance crises in PA. This is how you get a district where teachers work for free or a district that considers closing down all its high schools or a district that is handed over to a bunch of political appointees to run.

At any rate, Harrisburg has now developed a formula. It came up with the formula by surveying eighty public school districts and fourteen charters (because "Disproportionate Representation of and Care for Charters" is our middle name), then running the data through a bunch of politicians. It factors in poverty in a couple of ways, as well as English Language Learners, as well as actual enrollment numbers and the strength of the local tax base. Here's a graphic for more detail. 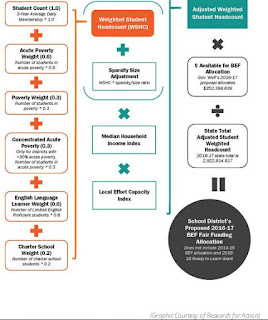 The legislature specifically avoided the question "How much money would it take to get School District X up to proficiency levels?" for any number of reasons, not the least of which is that everyone in Harrisburg knows the answer is "More than the legislature wants to spend." Also, our GOP-run legislature would rather eat ground glass soaked in kerosene and sprinkled over raw ground badger spleens than raise taxes.

The result of the formula is a sort of student number, measuring the district need in Regular Student Units. So, for instance (and I'm just making up numbers here) a single student who is an English language learner in a very poor district with concentrated poverty and no tax base might end up counting as four or five RSUs. The formula doesn't measure individual students, but you get the idea. 1,000 actual live students might be counted by the formula as 3,500 RSUs. The state is going to divide the money up by number of students-- but some students count more than other. So rather than divide the pie up by number of actual students, the state will award support ton districts based on their RSU number.

So does this make things better or worse?

As always, the answer is "It depends."

First, it doesn't make a huge amount of difference, yet, because this formula is being used only for the "extra" or "additional" or "bonus" or "Good heavens they actually increased school funding" money. All of the money that would have been distributed under the old hold harmless system? That's still going exactly where it would have gone. That's not necessarily a bad thing-- one of the problematic challenges of creating a school budget in Pennsylvania is that the local district has to pass its budget before they know how much money they're getting from the state. Under the old system, the district could make a decent ballpark estimate. Instituting a system that said "Your state subsidy will be somewhere between $100 million and $1.99" would have precipitated a statewide wave of school administration nervous breakdowns.

Second, some districts aren't going to look very needy under the new formula, and they won't benefit much, if at all.

But third, some districts' need now stands out in pretty stark clarity. This piece from regular PA edu-newshound Kevin McCorry features a map that shows you just how far behind each individual district is. The formula describes the "burden" on a district, the district's number of  RSUs, and what it has shown is that seventy-four districts face the same burden as if they had twice as many students, and ten districts are carrying quadruple the burden.

PA school funding is in a terrible hole, and we aren't going to dig our way out of it overnight. This formula, sparingly applied to a relatively small pile of money, is not a bad start. This will not be easy-- expect the usual complaints about how rich districts don't get their own tax dollars back, but must instead send those dollars off to subsidize Those Students in That Icky Poor City. And as always, our legislators must grapple with the fact that no matter how you slice a single rhubarb pie, it will not comfortably feed ten thousand people. The biggest part of the solution for school funding in Pennsylvania remains that there needs to be just plain more of it.

Still, this is one step toward fixing one of the nation's most inequitable funding systems. We'll see if it helps, or starts a trend, or lays some groundwork. Of course, first we have to pass the next budget.

Posted by Peter Greene at Wednesday, June 15, 2016
Email ThisBlogThis!Share to TwitterShare to FacebookShare to Pinterest