So, you may recall from last time, the elected capital clown car that is Pennsylvania's state government had sort of passed a budget that included an education spending increase, but had not passed rules on how to spend that extra money. Governor Tom Wolf whipped up his own plan for how to divvy up the money, only his plan didn't so much "divvy it up" as it "dumped most of it on a handful of select school districts" and also technically "ignored the elected legislature and their lawmaking powers." This made it unpopular with very many people. Very many. 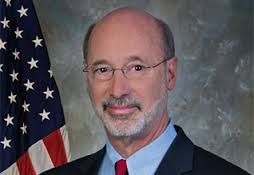 Wolf's theory was that some districts were particularly deep in a financial hole (thanks to the last two administrations, though Wolf prefers to blame it on just the last one), we need some restorative budgeting. In other words, if school funding is a race, Wolf wanted everyone else to just kind of sit on the curb and wait while a few people in the back of the pack catch a ride and join up.

The problem-- well, one of the problems-- as some folks tried to tell Wolf in a meeting or two, is that way more school districts are feeling Big Time Hurt than just those who made the Wolf Special Care List (a list which, frankly, looks more like a list of districts that have been pulling notable bad press-- Philly, Chester Uplands, Wilkinsburg-- than a carefully researched collection).

On top of that, as I previously warned/noted/predicted, Pennsylvania is just chock full of people who hate hate HATE having tax dollars yanked out of their pockets and sent off to Philly or other Big Cities. We can argue all day about justice and fairness and intra-state financial support, but the bottom line is that the issue is a guaranteed political turd bomb in Pennsylvania.

And so the House and Senate put together a spending bill of their own, passed it with a veto-proof margin, and sent it off to the governor. As with the budget, he can sign it or just let it become law while he sits in the corner and makes a pouty face.

This is good news for every school district that wasn't on Wolf's list (which is most of them) as they'll see more money-- maybe even enough to help offset the effects of all the borrowing, cutting and finagling that districts had to do to weather the nine-month Harrisburg budget storm.

The only good news for the state is that, miraculously, the nations' most expensive legislators actually managed to work across party lines and accomplish something. The bad news is that now that last year's budget has taken ten months to fully settle, we are already behind on the next budget-- and there isn't the slightest sign that anybody in Harrisburg has learned a thing from this mess that might help with the next mess.  Standard and Poor's thinks so too-- even as the long-overdue budget was limping across the finish line, S&P was threatening to downgrade PA's rating even further, rather that lifting it.

Meanwhile, Wolf has managed to make himself almost completely irrelevant to the budgeting process, and Pennsylvania's school funding system, which is fundamentally messed up, remains unaddressed. You can say we're moving forward, if circling the drain is a forward-ish sort of motion.
Posted by Peter Greene at Thursday, April 21, 2016