Give the Democratic Party Your Two Cents

Yes, there's every reason to believe that the Democratic Party is pretty thoroughly run through with corporate shills, oligarchic toadies, and neoliberal tools. It is also true that a party platform is like the line-up for an all-star game-- hotly debated one day and completely forgotten a month later.

Sometimes it takes a hundred hits of the hammer to crack open the stone. Sometimes it takes a trillion drops of water to smooth the edge of the mountain. Sometimes it takes the voice of one more Who in Whoville to get the message across. So even if, like me, you have your doubts about making your voice heard in the midst of all this foolishness, in a political season in which education should have been a major issue but instead was ignored once again, in the midst of this hopeless hoopla-- well, let's go ahead and speak up if for no other reason than it will make it impossible for the politicians to later say, "Well, gosh, we had no idea y'all felt that way about that thing." 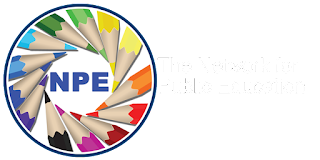 For supporters of public education, it's easy-- the Network for Public Education has created an easy-to-sign-on petition directed to the Democratic Party. Here are some of what NPE calls on the Democrats to support:

Opportunity Gap vs. Achievement Gap. Instead of using a standardized test score gap as an excuse to visit all manner of reformy nonsense on non-white, non-wealthy schools, let's drop the no excuses and zero tolerance approaches and instead give struggling schools the resources they need. Furthermore, let's leave the governance of all schools in the hands of local community members.

Funding. Do it. And while you're at it, prioritize public school funding over charter funding. And when you fund charters, require them to accept the same proportion of high-needs, high-cost students as the local public schools.

Student privacy. No selling of student data. Keep it safe. Keep it protected. And let parents know what you're thinking about doing before you try to do it.

The Danger of Venture Philanthropists and Big Business Interests. American public education is being broken down and sold off so that rich, powerful people can get their hands on a piece of the $600 billion pile of education money in this country. The Democratic Party should be standing up for local control and quality public education for all students. Do that.


Yes, I know. If it's going to go along with all of this, the Democratic Party will first have to have its lips surgically removed from the buttocks of some rich and powerful folks. But-- and (I can't stress this enough-- a year from now I would much rather be saying, "This is what we told you, and you ignored us, You said no." than to be saying, "Well, we didn't say anything because we figured you'd ignore us."

Sometimes you just have to speak up not because you anticipate a particular reaction or payoff, but because something just needs to be said (now that I think of it, that's kind of the whole philosophy behind this blog). The Democratic Party has largely abandoned public education and the people who work there. We need to tell them what they should be doing, what policies they should be backing.

So follow this link, add your name, and let NPE do the rest. Give the party your two cents. GOP folks-- give your party the message, too. Make some noise. Speak up. It may take a few million more drops before we see results, but we have to say something. If I speak up, I know that I can look at myself in the mirror tomorrow. If Democratic leaders can't, that's not on me. Do what you can. Make a little noise. Say what needs to be said.
Posted by Peter Greene at Saturday, June 04, 2016