Yes, It's That Bad

We have the first names of the Trump administration, and people are worked up. The choice of Reince Priebus as Chief of Staff is one more sign that folks who wanted Trump to completely turn his back on the establishment and drain the swamp-- well, that is going to be the first of many disappointments for them.

But the choice of Steve Bannon as Chief Strategist is bad news. Exceptionally bad news.

Bannon was the previous head of the white supremacist alt-right website Breitbart. Senator Jeff Merkley released a statement today condemning the choice. Petitions have popped up opposing the choice. Many people have spoken out against this choice for a job previously associated with folks like Karl Rove, John Podesta and David Axelrod. 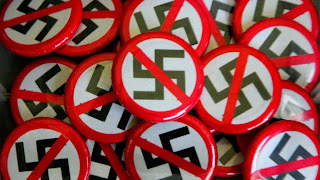 After the last year of campaigning, it is easy to dismiss all this as hyperbole. Some of you are telling yourselves, "Oh, surely it's not that bad. Folks on the left are just blowing this whole nazi aryan nation thing out of proportion." And it is true that it is now SOP for folks on both sides to cherry pick factoids, polish them, spin them, add a side of fake baloney, and release them in hopes of creating maximum outrage.

Let me warn you right up front-- I am about to publish some vile and hateful stuff. For some of us, it's no shock, because we already know this kind of thing is out there. For some of us it will be a shock because we really, really, really like to believe that in this day and age, people just don't talk like this, think like this any more. And that's why it's all the more important that you see this-- because you have to see that this is real. You have to see this is real so that you can really understand what all those people who aren't gifted with a white penis are freaking out about. Folks are not marching in the street because they're pouty election losers. They're marching in the street because the highest office in the land has been won by a guy who is BFF's with a movement that wants to drive them away, stomp them silent, kill them.

And second, you have to see this because this, despite all our belief that we were done with this shit-- this is what we're going to be fighting for the next however-many years.

I'm going to show you a piece from a website called Infostormer, and this sentence is the last non-ugly thing I'm going to write for a bit. You've been warned.

"Stormer" is a popular suffix in the US racist movements. This particular site is not the very top of the heap, but they are plenty successful. Alexa rates them around 65,000th in the US, with a huge growth in traffic over the past month. Oh, and their subheading is "Destroying Jewish Tyranny."

I am going to link to them so you can confirm I'm not making this up, but it's not for the weak of stomach. Here are some headlines from just the past couple of weeks:

As I write this, the newest story opens with this lede:

Good news here. It looks like we will be seeing a new alliance formed between the United States and Russia to destroy ISIS. Donald Trump spoke with Vladimir Putin about this and the outcome sounds like it was a positive one.

But let's get back to Steve Bannon. We know that liberals are freaking out about him. What about the white supremacists? Infostormer just ran a piece about the two appointments. They're not happy about Priebus, but after explaining that Chief of Staff is really a nothing job anyway, writer "Marcus Cicero" has this to say:

The whole idea of this individual [the Chief of Staff] being a kingmaker or chancellor can only be valid if one is dealing with a weak-willed President, and we can rest assured that the current Leader is nothing of the sort.

The Chief Counselor, on the other hand, usually has the ear of the President from day to day (and often moment to moment), and in the case of Steve Bannon, probably second to second due to a personality that is almost a carbon copy of the President’s.

Look for Bannon to wield great power and sway in this new Government of the People, and let us hope that his stances on the migrant invasion, Moslem filth, and Black subhuman crime rises above the beta compromise attitude of Mr. Priebus.

My guess is that we are seeing the results of a brilliant chess move by Glorious Leader, which will keep mainstream Establishment cucks sated, while the real work and strategy continues behind the scenes through Mr. Bannon, who is far closer to our views than the average Republican you will see on the tubes.

Bannon is basically Trump, and Trump is our "Glorious Leader." I'm not going to retype the other odious bullshit contained here.

Meanwhile, the Daily Stormer, another neo-nazi site, is running headlines like "Yes, Trump Really Can Make America White Again – With or Without Cucked Congress" and congratulating Trump on "surrounding himself with all the right people."

People are not making this shit up. I have no doubt that there are many folks who voted for Trump who would or do find this sort of rhetoric appalling and disgusting, but they need to understand that these people are huge Trump supporters who see absolutely no reason not to believe that Trump is their guy, ready to establish a government that supports all of their favored goals. And if you have been just sort of letting all of that drift away in the background, America's neo-nazis have not-- and neither have the people who are targeted by these groups.

This is why "Let's all come together for the sake of the country," doesn't quite cut it this time-- because it's really hard to unite with people who want to see you gone.

Is it Bannon's fault these people love him? Actually, yes-- he's spent much of his career cultivating them as an audience. Is it Trump's fault these people think he's their Glorious Leader? You could argue that every President in forever has had some sort of lunatic fringe attached to him, I suppose. But even if that's true, it is absolutely Trump's fault that he has not repudiated some of the rhetoric thrown around in his name (I think of John McCain shutting down his own supporters over their fears about Obama) and it is absolutely Trump's fault that he has brought a man who leads and is revered by white supremacists in this country into the White House.

Do I want to see Trump succeed? I surely do, because his failure only brings more disaster to the country. But he will not be a "success" if he allows this festering rot to break forth and poison the air that all Americans breathe. Oddly enough, I think the possibility exists for him to turn back this mess precisely because although he is a man with no apparent convictions to be devoted to. He plays to whatever crowd is shiniest. And that means that Americans need to rise and shine.

Yes, there is a whole complex web here, and it's being untied slowly and painfully in a thousand think pieces. How did Clinton lose, and why, and whose fault is it. Who put Trump in the White House, and what does that mean about us as a nation? Have we been growing some ugly new strain of racism, or is this just the same old stuff with the shielding ripped off? Etc etc etc-- there are a lot of complicated issues to untangle.

But this is not one of them. Should the US government be one that makes nazis really happy, or is that a sign that something is off track-- not a complicated question. Do nazis belong in positions of power in the US government-- that's not a complicated question. Is it okay for people in government position to advocate for the oppression of any group of American citizens-- that's not a complicated question either. Should we stand up, loudly and strongly to these kinds of people when they rise up-- one more of these very simple questions. But they are the questions before us, because, yes, it really is that bad.
Posted by Peter Greene at Monday, November 14, 2016
Email ThisBlogThis!Share to TwitterShare to FacebookShare to Pinterest