I only recently encountered this article from back in February, but it has really stuck with me. It has nothing at all to do directly with education, but it has everything to do with education. Charles Duhigg's "What Google Learned from Its Quest To Build the Perfect Team" was part of a package of articles about "reimagining the office," but there is of course a whole world of teams, including the team made up of teachers and the students in their classrooms. Yeah, maybe Google is the Evil Empire, but that doesn't mean Googlers can't find useful knowledge. So what did Google learn, and what does it mean to us as teachers? 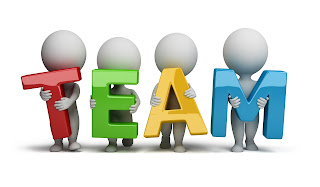 Google for many years pursued super-groups by using what may seem like common sense-- put the best workers together and you get the best work group. Duhigg also notes that managers tried various types of group folk wisdom-- groups should socialize outside of work, introverts should be teamed with introverts. But as Google set out to figure out what made the best groups the best, researchers realized that many commonly accepted pieces of wisdom had never actually been tested.

Project Aristotle launched in 2012, a group project about group projects. The team examined all sorts of features, from male-female balance to shred hobbies to shared college background. No piece of data seemed to hold a clue. Said Abeer Dubey, a manager in Google’s People Analytics division, ‘‘We had lots of data, but there was nothing showing that a mix of specific personality types or skills or backgrounds made any difference. The ‘who’ part of the equation didn’t seem to matter.’’

Eventually, the researchers shifted their focus from the "who" of group composition to the "how" of group interaction, and that was the key. Norms, the unofficial (or semi-official) rules by which the group operated looked like the most important piece. But how to narrow down the search?

Google’s research had identified dozens of behaviors that seemed important, except that sometimes the norms of one effective team contrasted sharply with those of another equally successful group. Was it better to let everyone speak as much as they wanted, or should strong leaders end meandering debates? Was it more effective for people to openly disagree with one another, or should conflicts be played down? The data didn’t offer clear verdicts. In fact, the data sometimes pointed in opposite directions. The only thing worse than not finding a pattern is finding too many of them. Which norms, Rozovsky and her colleagues wondered, were the ones that successful teams shared?

Eventually the researchers narrowed their focus on two behaviors-- good groups allowed for an balanced amount of sharing and input from all members, and good groups showed emotional sensitivity, what we might call emotional intelligence, to have a sense of how all group members were feeling. And those in turn led to the key:

When Rozovsky and her Google colleagues encountered the concept of psychological safety in academic papers, it was as if everything suddenly fell into place. One engineer, for instance, had told researchers that his team leader was ‘‘direct and straightforward, which creates a safe space for you to take risks.’’ That team, researchers estimated, was among Google’s accomplished groups.

Groups do well when they establish a psychologically safe environment. And that leads us to this killer paragraph in the article:

What Project Aristotle has taught people within Google is that no one wants to put on a ‘‘work face’’ when they get to the office. No one wants to leave part of their personality and inner life at home. But to be fully present at work, to feel ‘‘psychologically safe,’’ we must know that we can be free enough, sometimes, to share the things that scare us without fear of recriminations. We must be able to talk about what is messy or sad, to have hard conversations with colleagues who are driving us crazy. We can’t be focused just on efficiency. Rather, when we start the morning by collaborating with a team of engineers and then send emails to our marketing colleagues and then jump on a conference call, we want to know that those people really hear us. We want to know that work is more than just labor.

As I said-- nothing in this article addresses education, yet the concept of psychological safety is absolutely what we need to establish in a classroom. It allows our students to connect their own humanity to the work of learning, which is one of the most critical connections to make. What purpose could there possibly be in teaching a child that Learning Stuff is a thing you do in school, not in any way connected to who you are and how you live your life.

This also, for me, puts a face and a name on what's so deeply wrong with No Excuses schools, which are all about establishing the exact opposite of a psychologically safe space. Students are instead required to live on High Alert at all times, understanding that they must bring absolutely none of their personality and inner life into the classroom, that they must learn to always wear a mask, and that they are in a space that is most decidedly unsafe.

Or grit, which denies our responsibility to establish a psychologically safe space for our students, instead demanding that they develop the "grit" and "resilience" needed to operate in a deliberately unsafe space.

This article also underlines the foolishness of imagining that there is a single set formula by which classrooms can be operated. In one portion, Duhigg tells the story of a manager who, struggling to get his team to connect, tells a highly personal story about his own health issue, even though there was nothing in the protocol that told him to take that step.

But you can no more script a perfect foolproof way to manage a group of human workers or human students, no, no more than you can hand out a foolproof script to a hundred people, telling them that if they follow the script, they can have a happy marriage.

Yes, there is sad irony here. Google spent a ton of time and money to learn that the best way for humans to work together as a team is for them to act like humans with each other. Well, the best kind of humans-- the supportive, open, messy, honest, listening real kind.

There is no difference between those work groups and a classroom. We have to see the humans, listen to the humans, be open to the humans, love the humans that are in those classrooms with us. Insisting that they strip off their true authentic selves at the door and wear a fake mask-- insisting in fact that the fashioning and wearing of the big fake mask is what education is all about-- that's just wrong. And not just morally or ethically wrong, but it-gets-lousy-results wrong.

And of course now, more than ever, our students need to have a safe place. They need to know that our classroom is a safe place to be who they are, even if it feels like the whole rest of the country is not safe for them.

This is how we make a team. By sitting down as real live humans together, open and listening to each other. And you know it's true, because Google says so.