Spotting Fakes and the Death of Reading

I've looked once before at the Stanford study which found that students-- middle school, high school and college-- can't tell the difference between real news and advertisements, fake news, or just general detritus on line. The researchers themselves called the results shocking; that may be only because they haven't previously spent enough time around middle school, high school and college students. But "alarming" would be a perfectly good word to use. And I would argue that these results point the finger directly at over a decades' worth of bad standards-loving, test-driven, reading and writing educational malpractice. 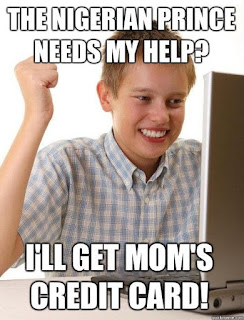 Now at last we can read the overview of their study here, but be warned: Evaluating Information: The Cornerstone Of Civic Online Reasoning is not going to make you feel better about Our Nation's Youth or any of the education reforms of the modern reformster era.

The study aimed five tasks at each of the three groups, and the paper I've linked to gives a detailed explanation of one task out of each group of five.

Middle schoolers were asked to evaluate trustworthiness on twitter, consider the reliability of s sponsored post, distinguish between a news article and an opinion column, and determine whether or not letters from a comments section would be good to use in a research paper. They were also shown a Slate home page and asked to find the ads.

Most could find the traditional banner ads, but most did NOT count the "sponsored content" item that appears on the home page, reasoning that it didn't say "for sale." Students also identified some actual articles as ads. So, not so good.

High schoolers were asked to identify the merits of arguments presented in a Facebook argument, as well as spotting the little blue checkmark. I'll allow some slack here, because my students inform me that Facebook is for grandmothers, so they might not be familiar. But they were also given a task with a photo sharing site. They were shown a close up photo of some flowers shared by a user with the authoritative handle "pleasegoogleShakerAamerpleasegoogleDavidKelly" that claimed to be a picture of flowers mutated by nuclear radiation exposure.

While some students did question the legitness off the source, even some who questioned it showed a bit of a reasoning gap-- my favorite dissenter is the student who ruled out the photo, not because there was no evidence that it came from where it claimed to come from, but because it could have been photoshopped. SMH! And many other high school students were fully convinced that they were seeing sad signs of nuclear poisoning.

College students were asked to rate website reliability in several tasks, including one in which they were asked to compare the websites of the a completely legit group and a completely fringe one (check my previous post for that sad story-- spoiler alert: they failed). They were also asked to evaluate a tweeted link to poll results, and got twisted up over the difference between the tweeter's identity and the actual source being linked to. Many of the students simply dismissed the results based on who was tweeting it without actually checking to see if the linked material looked legit.

These results led the researchers to use descriptors like "dismaying," "bleak" and "[a] threat to democracy."

Why none of this is a surprise

Okay, we can attribute some of this to the test subjects themselves. We're talking about 10-21 year olds, a group that has never at any point in history been famous for their level-headed critical-thinking-based powers of judgment. This is why middle school teachers spend 10% of their day putting out fires about who supposedly said which mean thing about whom.

But that's not the only reason to be not-surprised by what is essentially a yawning gap in reading skills-- for well over a decade we have explicitly been told not to teach students to read or write well. Check out this excerpt:

American president Franklin Delenor Roosevelt advocated for civil unity despite the communist threat of success by quoting, "the only thing we need to fear is itself," which disdained competition as an alternative to cooperation for success.

That's from an essay cobbled together under the direction of Les Perelman, former director of the MIT Writing Across the Curriculum program, and an outspoken critic of computer-scored student writing. The above highlight is an excerpt from an essay that scored a 5. I've written a great deal about the abomination that is computer-scoring of essays, but the bottom line is that computers don't understand what they're reading-- they can only break down the parts and mechanics of the writing. And even when computers aren't used, we've trained test-scorers to assess writing just the same way.

This Common Core writing is the flip side of Common Core reading, which deliberately ignores content and context and pretends that reading is simply an act of decoding symbols, separate from any actual meaning. David Coleman has demonstrated at great length how much he doesn't understand the act of reading, and that lack of understanding permeates the Core and the Big Standardized Tests that come from it.

The kinds of questions needed to read critically, particularly as a consumer of internet news-- who wrote this, when, what are their connections, what's the background of this topic, what are the sides involved and how does this writer connect to them, where are the vested interests, what motives can we deduce before even reading-- these sorts of questions are expressly forbidden in the Common Core world of "pay attention only to what's within the four corners of the text." We often teach (and always test) with small excerpts of larger works, with no context or explanation and with the assumption that content is unimportant.

In the Age of Common Core, our ideal reader is one who can decode whatever we put in front of her, but who doesn't actually know a damn thing.

In practice that is both impossible and undesirable, but it's the north star by which reading instruction has been steered for over a decade, and Common Core ELA has gotten us too damn close to that ideal for comfort. Coleman and his acolytes have done their best to kill reading as a meaningful relationship between  readers and material, steeped in, informed by and building on knowledge of content and context. Their ideal is best captured by a small child taking that dame DIBELS test, trying to decode meaningless collections of sounds because that, boy, that is really reading in their world.

If we never venture beyond the four corners of the page, we have no means of judging true from fake. On paper, to a DIBELized reader who brings no knowledge of history to the task, Adolf Hitler and Martin Luther King, Jr., both look legit on the page. Because the very best frauds strive for perfect consistency and fluency within the four corners of their fakery, Common Core trained readers are absolutely not ready to spot them.

To spot a fake, you have to know the real thing, to understand it and grasp what makes it the real thing. Then you have to compare the two, understanding the context and content and separating the meaningful from the bogus fakery. This, like every other aspect of critical thinking, is not covered on the Big Standardized Test and never will be. Yes, CCSS and BS Tests ask students to compare aspects of two non-fiction sources, but until the task on one of these comparisons involves outside research and the answer turns out to be "Selection A is a bunch of bullshit," students will not be prepared for fraud patrol.

I'm not saying that Common Core is responsible all by itself for the Stanford results. I am saying those results are a predictable consequence of our content and context-free reading mis-instruction over the past too-many-years. Unless you are a Nigerian prince trying to unload millions of dollars, that is bad news for us all.