Perhaps the most striking thing about the many, many elections going on around the country (honest, the Presidency is not the only thing up for a vote) is the huge amount of money being invested in so many of these races. 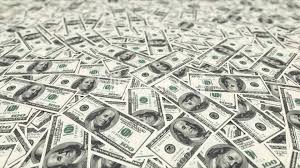 * In Massachusetts, an extraordinary amount of dark, out-of-state money has been spent to open the market for more charter entrepreneurs to come in and make a buck revitalize education for at least a few select Massachusetts students.

* In Washington state, charteristas have dropped a bundle trying to unseat three incumbent State Supreme Court justices who had the nerve to stand in the way of charter growth.

* In Connecticut, charter groups are dumping a bunch of money into the legislative races.

* In Georgia,an amendment to push an "Opportunity School District," modeled on the failed state turnaround districts of Tennessee and Louisiana, is being driven by Georgia Leads, a deep-pocketed group supported by more dark money.

* In New York, Zephyr Teachout is up against a pile of money to the point that it makes perfect sense for her to issue a debate challenge to her opponent's billionaire backer rather than the opponent himself.

* In Florida, a solar energy amendment is actually a red herring, backed by millions of dollars from energy corporations and intended to actually shut solar energy down rather than free it-- an ugly enough mess that the bill had to go to court.

What these races, and so many other local and school board and state-level races around the country, have in common is the involvement of folks with lots and lots of money who are hoping that they buy their way past troublesome old democracy and the voters who insist on believing that they should have a voice and a vote. Deceptive ads, media blitzes, imported professional consultants-- money is no object and chipping away at democratic rule is the goal.

Yes, the rich and powerful have always worked deals in smoke-encumbered back rooms. But they have never been free to spend so much, so boldly and baldly slapping down cash on the barrelhead to buy the laws, the representatives, the policies that they want. The mind reels to consider what could have been done for the nation with the money spent on every part of this year's election season.

Whatever the races are in your region, do your homework. Check to see who is really backing the candidate or the proposal. You have the internet-- use it.

It's funny-- education reformsters have long repeated the refrain that we can't improve schools by "throwing money at them," but when it comes to getting their way at voting time, there's no amount of money that is too big to throw at elections.

Don't be bought. Don't be fooled. Find out what the real choices are, and vote accordingly. Make tomorrow count.
Posted by Peter Greene at Monday, November 07, 2016