The Franklin Academy charter chain of Florida says it takes its inspiration from Ben Franklin, "a founding father who personified the pursuit of excellence, discovery and creativity." But they apparently also credit Franklin with being a champion of compliance and test prep, and they apparently don't share his respect for teaching.

7th grade English teacher Elliott Herman has been fired by the Palm Beach branch of the charter chain. His offense was, apparently, trying to add some actual reading to the test prep curriculum required by the chain. From a story in local media:

“Teachers want to teach more but we’re told not to,” said Herman.

He was teaching his English class “The Giver,” a book he taught the class last year, too. However, this year the school removed “The Giver” from the curriculum.

“They said we don’t want you wasting time reading in the class,” said Herman.

So Herman had his students read the book at home and asked them to be ready to analyze the book in class.

But after his most recent in-class review, he learned the school didn’t want that either.

It's possible this was a sort of double-violation, as the Franklin Academy FAQ page promises that as long as your child is on track, there will be no homework. But the charter has, of course, declined to offer any explanation for Herman's dismissal, so all we know is what's out there now.

The chain says they base their educational philosophy on a Ben Franklin quote-- “Tell me and I forget, Teach me and I remember, Involve me and I learn" -- and if you have been on the internet for more than a week, you can guess what I'm going to tell you next: Ben Franklin didn't say that. Best research says that's Chinese philosopher Xun Kuang as quoted in the Xunxzi. 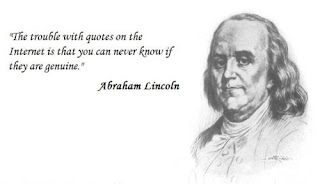 Franklin Academy has been in trouble before. Back in 2013-2014, Governor Rick Scott pushed money out to all Florida schools earmarked to give each teacher a $2,500 "raise," but the newly-opened Boynton Beach campus of Franklin Academy decided they'd just go ahead and keep that money for the general budget.

You'll be shocked to learn that Franklin Academy has trouble holding onto personnel. That same Boynton Beach campus lost their principal three months into their first year (whether she jumped or was pushed was a topic of some conjecture). And a reviewer on Glassdoor.com, the rate-your-employer website, had this to say about Franklin Academy:

Administration is VERY disorganized, high staff turn over, seasoned teachers leaving. No job security- over 30 staff changes in one year. If Admin likes you or you fly under the radar it is very peaceful, but if for whatever reason something changes they create a hostile work environment. The Admin has been dubbed as "mean girls" by some of the staff.

The Franklin Academy chain is actually run by Florida Charter Foundation, Inc. So let's wander down that alley for a moment.

The Florida Charters Foundation was first registered in 2006, with Scott Sznitken listed as their principal and five other names who are still on the governing board today, all listed at the same Ft. Lauderdale address. The offices are in a smallish building along with ten other businesses, including a couple of restaurant management firms, but several of those businesses appear to be managed by another business in the building, Waldera and Brown, P.A.. The office building is (I swear, I am not making this up) across the street from a church and next door to "Sugar and Spice Boudoir Photography." Ah, Florida.

The original names of the board were Catherine Arcabascio, Jacqueline Greenberg, Alexandra Lonsdale, Deborah Platz, and David M Thomas, and with the exception of Alexandra Lonsdale, they are hard to pin down. Lonsdale got her Masters in Education from UF in 2008 and has worked mostly as a teacher. She is the only person but one on LinkedIN to list this board. The other four could likely all be lawyers, but it's hard to be certain. Scott Sznitken is a lawyer with a background in managing tech solutions for various industries like health care. The Florida Charters Foundation does not have any website beyond the Franklin Academies site.

The six campuses are big and beautiful. How does a modest charter management group pull off that trick? Well, the for-profit investment group making nice retirement money for charter investment whiz Andre Agassi-- they built the Boynton Beach facility for Franklin Academy, and Agassi even came and walked around his new source of investment income.

The chain has been growing rapidly and appealing to other charter and private school families. This growth is reflected in the 990 forms that the non-profit Florida Charters Foundation must file with the IRS (you can view this stuff at guidestar.org, but you'll need to set up an account). In 2012, FCF reported gross receipts of $8,360,951. In 2015, the number was $36,314,859. In 2012 they finished the year with just under $2 million in assets; in 2015, it was $5.5ish million.

The chain contracted out a few areas of expense. They spent $1.4 million to a leasing company, $1.1 million for insurance, and $1 million for health insurance. $897 K for "leasing and insurance" to a corporation in Los Angeles, and a little over $700K for school supplies. Board members were unpaid, and Sznitken received $113,608 as executive director, which honestly is not that impressive. Eva Moskowitz wouldn't get out of bed for that kind of chump change.

The chain listed $33,955,623 in revenue from government grants. It also reported almost $8 million in deferred rent payments, so if nothing else, they have a patient landlord.

And I've spent far more time on these folks than I had any intention of spending. Bottom line: these guys may not be laundering a gabillion dollars through their schools, but neither is this some school realizing Shanker's vision of teachers finding a way to better do the job of teaching.

Which brings us back around to Mr. Herman's problem. There are a couple of lessons to learn here, and charters are going to continue to do well until these lessons sink in to the public:

1) If you go to work for someone who can fire you for any reason, and the corporation that hired you doesn't really know anything about how to do your job, sooner or later they will probably fire you for some dumb reason. Either that or you're going to knuckle under to perform some sort of educational malpractice.

2) If you send your child to a charter school, and you don't like something that happens at the school, you will not be able to find somebody in the organization that has to listen to you. You might not be able to find anybody at all. The lead on this story has been that parents have turned to the press to air their grievances, to which I say, well, yes, of course. If your child is at a charter school, that's pretty much your option-- take to some form of media and hope you can raise sufficient fuss that someone in charge has to pay attention (to date, the Franklin Academy Palm Springs Facebook page is quiet and happy).

Charters have told us repeatedly, directly and indirectly, that they do not function like public schools. At some point folks have to stop being surprised when that turns out to be true, and they can do things like fire English teacher for trying to interrupt test prep with actual education.
Posted by Peter Greene at Saturday, November 19, 2016