New York magazine ran a piece by Jonathan Chait that considers some more ed policy possibilities from the upcoming Trump administration-- but just to switch things up a bit, his article throws around pieces of news from some alternate universe. 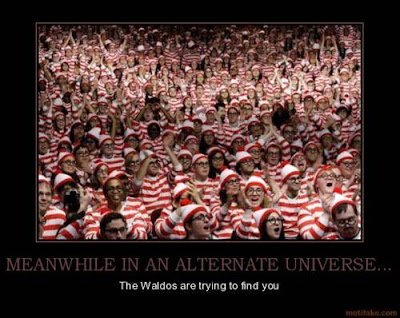 "Will Trump Give Education Reform the Kiss of Death?" is a legitimate question, but Chait throws in some ideas that are just counterfactual. The hook here is to consider the hypothetical Ed Secretarydom of either Eva Moskowitz (Success Academy) and She Who Will Not Be Named (former DC Chancellor and reformster cover girl). These hypotheticals are certainly legitimate-- hell, Trump may well appoint Britney Spears to the post, so any conjecture has a non-zero chance of accuracy.

But in the article, Chait keeps dropping little anti-truth bombs.

That's based on Chait's misunderstanding of the debate over the supplement-not-supplant argument waged between John King and Congress. It's not a particularly simple issue, involving questions like "how do we actually count the money being spent in schools" and "is it okay for the ed department to ignore the barely dry letter of the newly minted education law and just do what they'd rather." There are plenty of reasons to believe that King's idea will actually hurt poor schools, but Chait simplifies the whole debate to "King wanted to give poor schools money and the GOP and unions stood in his way." This is not so much lacking nuance as ignoring big chunks of the issues.

It is possible that the Trump administration would continue the de facto alliance it has cultivated with unions.

I think a lot of (or "most" or even "all") folks would be surprised to learn that there was an alliance between Trump and the unions. Chait doesn't really explain himself, but I think the suggestion here is that Trump and the Unions both hate Common Core. Except that AFT and NEA leadership have mostly been for Common Core. I've been in the room for one of the many times that Randi Weingarten and Lily Eskelsen-Garcia stood up for it in front of a group that was fairly hostile to the whole thing. Chait moves straight from the Core to charter schools, on which Trump and the unions are pretty much in complete disagreement. So what his exact evidence for this "de facto alliance" might be is, well, not available in this universe.

Chait's not completely off-planet all the time. He notes that Trump surrogate (and real estate/charter school grifter) Carl Paladino's claim that Arne Duncan and the Ed Department were in the unions' pockets was completely off base, as the unions had "fought bitterly" with Duncan and demanded his resignation. Well, members did. Union leadership dragged their feet on this issue as well.

Both Rhee and Moskowitz have strong credentials as urban-school reformers. But both have pursued education in the center-left mode, which emphasizes strong central oversight, accountability, and mechanisms to evaluate and close failing schools of the charter or neighborhood variety.

"Center-left mode"??!! What is he even talking about? Moskowitz and She Who Will Not Be Named are center-left only in the sense that they have pretended to be democrats. But they are neither red nor blue nor even purple; the color of their concern is green, and their structural model is anything that they maintain central control over.

Chait calls their approach the opposite of "Trump's know-nothing" approach, but as he himself acknowledges in this article, mostly their policies are exactly like Trump's-- expand privatization and let business people with no actual education expertise make a whole bunch of money.

Chait says this imaginary policy territory that Moskowitz and She have staked out would conflict with Trump first because Trump wants to spend all his money on other domestic policy stuff. But Trump has already declared that he'll spend $20 billion on spreading charter schools as well as demonstrating that having an actual source for all the money he plans to spend is not a big concern of his.

And then there's this whopper.

Both Rhee and Moskowitz have yielded dramatic and even revolutionary improvements in education outcome for underprivileged urban children, establishing as proof of concept a model that can wipe out the achievement gap between students in high-poverty neighborhoods and affluent ones. It is one of the most promising achievements in American social reform in decades.

Not on this planet, they haven't. She's supposedly made great strides in DC, but it now looks like those strides had less to do with great education policy and more to do with widespread cheating on the tests. Moskowitz has shown that having political connections, a bunch of extra money to spend, intense test prep, and carefully selected students really pay off. None of that represents an innovation. Eliminate the achievement gap? Certainly not in DC, and in New York Moskowitz has never filled one of her academies with a true broad sample of poor neighborhood children. Challenging students in Moskowitz's world end up on the Got To Go list.

Chait also cites the charter defeat in Massachusetts as the result of union agitation, a profound misunderstanding of how deep and wide the parent and community grassroots was that defeated the hedge funders pushing charters on neighborhoods that didn't want them under such conditions.

Chait correctly notes that reformsters who have tried to pitch their ideas as civil rights solutions will take a hit if their ideas are suddenly backed by "America’s most famous racist." And that brings him to his wrap up where he suggests that the Trump administration will be such a dumpster fire that reformsters should probably steer clear of it if they want to preserve the cause.

There's a worthwhile point buried in here somewhere. Lots of reformsters who have pretended to be social justice crusaders or Democrats to help further the cause now find that they are soldiers who are wearing jungle camouflage in an arctic battle, and they will need to change disguises if they hope to prosper (for reformsters who actually believe in their social justice rhetoric, these will be even harder times).


Guilty in May. Much changed after, 4 all involved, including selecting @mike_pence & @KellyannePolls https://t.co/nwLl4YdYcs
— Jeanne Allen (@JeanneAllen) November 16, 2016

Back in may, Jeanne Allen of the charter-loving Center for Education Reform said she didn't want to hear her issues coming out of Donald Trump's mouth. She's since found a way to adjust; many other reformsters will have to follow her lead. Corporate education privatizers are going to need a new map of the territory. I just suggest that they not buy their new map from Chait.
Posted by Peter Greene at Wednesday, November 16, 2016