Now that Betsy DeVos is set to be our next Secretary of Education, we have a few weeks to unpack some of her intriguing associations.

We already know the basics-- DeVos is a rich patron of the GOP establishment, DeVos wants vouchers very badly, and DeVos wants tax dollars to flow freely to white Christian schools. If you want to now what DeVos policies look like in practice, simply look at Detroit, where she has largely gotten her way.

The Acton Institute was founded in 1990 in Grand Rapis by Fr. Robert A. Sirico and Kris Alan Mauren and was named after Lord Acton (the "absolute power corrupts absolutely"). Their website says their mission is "to promote a free and virtuous society characterized by individual liberty and sustained by religious principles."

Acton is a member of the State Policy Network, the Heritage Foundation's loose collection of right-wing and libertarian thinky tanks,  but unlike some of their strictly political brethren, Acton is all about the religious aspects. While they don't quite rise to the level of "greed is good," they do rise to the level of "capitalism is God's most blessed way of sorting out the world." (My words, not theirs) The Institute puts out several print publications, including Religion & Liberty and the Journal of Markets & Morality.

They also run a blog, and that provides a variety of astonishing pieces. Here are just a few recent titles: "Give Thanks for the Miracle of the Marketplace," "Does Acts 2-5 Teach Socialism" (answer: absolutely not), and "Defending Capitalism Is Like Recycling." They also like links to the Foundation for Economic Education like "Thanksgiving Was a Triumph of Capitalism over Collectivism."

It's a spin-off of a FEE article that gave Acton this next winner: "Bring back Child Labor: Work Is a Gift Our Kids Can Handle." It's spun from an article by Jeffrey Tucker, who is an associate of the Acton Institute, Director of Digital development at FEE, and an adjunct at the Makinac Center for Public Policy, another DeVos-backed group that has been instrumental in pushing DeVos policies in Michigan. 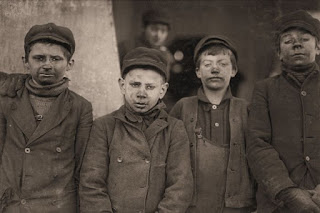 Acton writer Joseph Sunde is sad that modern life, with all its "abundant prosperity" has removed work from the lives of children. Noting the recent Washington Post publication of photos from America's rougher, more child labory past:

The photos surely point to times of extreme lack, of stress and pain. But as Jeffrey Tucker rightly detects, they also represent the faces of those who are actively building enterprises and cities, using their gifts to serve their communities, and setting the foundation of a flourishing nation, in turn.

He then goes on to quote Tucker:

They are working in the adult world, surrounded by cool bustling things and new technology. They are on the streets, in the factories, in the mines, with adults and with peers, learning and doing. They are being valued for what they do, which is to say being valued as people. They are earning money.

Whatever else you want to say about this, it’s an exciting life. You can talk about the dangers of coal mining or selling newspapers on the street. But let’s not pretend that danger is something that every young teen wants to avoid. If you doubt it, head over the stadium for the middle school football game in your local community, or have a look at the wrestling or gymnastic team’s antics at the gym.

Yes, coal mining and middle school football-- pretty much the same thing, especially if your program involves playing games that last ten hours a day, seven days a week. Yes, Carnegie, Rockefeller and other Giants of Industry used to stand in front of their workers and declare, "I really value you as people," and then finish with "So why would you want me to pay you more money?" Yes, we all remember those stories where Rockefeller and Trump and DeVos sent their children off at a young age to work in the mines because they wanted their children to be ennobled.

This is, simply speaking, nuts. This is one step short of saying, "Slaves were actually quite happy in their lives, with a noble purpose to fulfill."

Sunde goes on to say that in modern times, the ennobling world of unskilled labor doesn't require twelve hour workdays and unsafe conditions. And Tucker fills in the rest:

If kids were allowed to work and compulsory school attendance was abolished, the jobs of choice would be at Chick-Fil-A and WalMart. And they would be fantastic jobs too, instilling in young people a work ethic, which is the inner drive to succeed, and an awareness of attitudes that make enterprise work for all.

Right. Rich folks are making their kids work for minimum at WalMart all the time, so they'll be better people with strong work ethics.

Look, I am a big fan of work. My dream world is not one where everyone sits around on their ass and the money just rolls in by magic. I will even confess to a bias, a tendency to think less of people like Trump or DeVos who have never actually done any real work, but have gotten rich by playing games with other people's money and the fruits of other people's labor.

But this is some Grade A Bettercrat bullshit. The line of reasoning for DeVos and her friends is simple-- some people in this world really are better than others, and those people should be in charge, should be making decisions without being hemmed in by government and certainly not by uppity Lessers who form unions and otherwise thwart the proper order of things. Capitalism is God's way of showing us who the Betters are (they're the ones with the money) and so any government mandates that force us to spend our money on Those People-- well, that's not just bad politics or bad economics, but it's immoral. The state has no business thwarting God's will. Not that the Betters will turn their backs on the Lessers-- not at all. It is a Better's job to help Lessers find their rightful place, so that they can be happy in the work that God has made them for, which is to serve the interests and needs of their Betters. Our modern society is contentious and unhappy because government, often in the hands of evil bolsheviks and their ilk, has upended God's natural order of things, making everyone unhappy. If we could just get the Lesser children back in the mines and their parents working quietly for whatever their Betters think they should get, everything would be okay again. (That's why we call it Right To Work-- we are re-establishing Lessers' right to work the way nature intended them to.) And if we can't get them back in the mines as children, at least we can put them in schools where they learn hard work and discipline and compliance and, God help them, grit, because that's what the children of Those People will need (and who knows-- every once in a while, we may find one who is made of Better Stuff and deserves to be elevated by Betters' largesse). The only Civil Right people need is the right to happily know their proper place. America would once again be great.

This is what we have headed for DC. Lord knows, it's not a brand new philosophy, and it has been informing plenty of ed reform up till now. But now it's likely to become a steamroller that pushes aside well-meaning reformsters (yes, I think there are such things) and crushes the notion of a one-tiered education serving all American students-- as if they were not divided into Betters and Lessers.