Sarah Mondale is a documentary filmmaker and teacher. Ten years ago, she and her partners created the multi-part documentary School: The Story of American Education (you can find the book form at many booksellers). Now she has a new project and it deserves your support.

Backpack Full of Cash is a look at the privatization of education in America, how the drive to make schools into a profitable business is dismantling one of our most basic and foundational institutions.

The film takes us to New Orleans, Philadelphia and Nashville, a pretty perfect selection of cities to give the real sense of the forms the privatization movement takes.

And I particularly love the central question that the film settles on, because I have the same question:

Why dismantle the public school system?  Why not make it work well for every child instead?

The marquee name attached to the film is Matt Damon, who reads the narration. It's a nice gesture and a necessary feature in today's market ("Oh, the narrator is someone I've heard of, so this must be a real movie.") 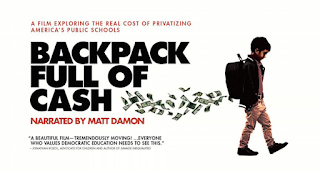 The production is three days away from the end of its Kickstarter campaign to collect the $31,600 needed to finalize this production. This is a story that needs to be told and a film that needs to be out there for the public to see. I'm asking you, if you're at all a fan of this blog, to head over to Kickstarter and make a contribution, however small. We can't all be filmmakers and we can't all be activists, but we can all kick in a few bucks to help amplify the voices of people who speak out on important issues. This is a story that needs to be told-- help tell it.