People keep reposting the latest Trumpian shenanigans and saying, "This is not normal." On the one hand, I get what they're saying. On the other hand, as I've watched this administration unfold like a pile of maggots bursting out of a rotting deer carcass, it's dawning on me that Trump is actually normal. Fully normal. Nakedly normal. 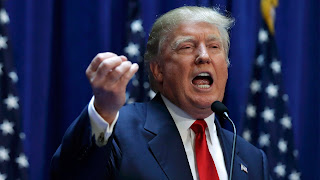 As Jon Stewart pointed out, we don't really live in a new America. This is the same country that elected Barack Obama, the same country that existed a month ago. There is not much happening that has not happened before-- it's just that now it is naked. From "Christians" who don't remember anything from the Bible except "Abortion is bad" to "Progressives" who think he may work out after all, Trump has exposed a great deal of hypocrisy and base motives previously hidden behind pretty dressing. Trump has somehow ripped off the new clothes and dared anyone to pretend they still see them.

My first clue was back during the campaign. Trump didn't really do anything, say anything, campaign on any point that other GOP candidates had not already done. But where some GOP stalwarts would try to be racist or misogynistic through complicated dogwhistles or clever wink-wink nudge-nudge rhetoric, Donald J. Trump just said, "What the hell. Let's just say it. Those Mexicans are after your job and they look pretty dangerous and rapey. And we'd be better off if we just made all the Muslims go away and stay away. Oh, and let's just keep 'em out with something big and simple-- a big ass wall. And everything will happen the way I say it will because I'll just make it happen that way."

GOP candidates were stymied because nothing they had to offer was an actual contrast to Trump's plans. He was simply trotting out naked what they had tried to imply. And in the process, he just made them seem weak and fuzzy. Where they would either try to diplomatically include all citizens or even tried to respect the nuance of complex issues, Trump just said, "Screw it. If we agree that Hillary is awful, let's just plan to throw her ass in jail. You hate ISIS? I hate ISIS! Let's not make this complicated-- I'll just bomb the shit out of them." Let's not inch down this hill; let's take our foot off the brakes and really lean into hateful lunacy.

The GOP wanted to have their white cake and eat it, too, but Trump just said, "Hell with it. I'm just going to eat all the cake and I'm not going to pretend I care about leaving crumbs for everyone else."

My second clue was his approach to education and the scramble he touched off in reformster land. Supposedly progressive reformsters have promoted charters "for the kids" and to bring about social justice. Supposedly conservative reformsters have promoted charters because the magical free market makes things work better. Trump has simply ripped the covers off all pretenses. "There's a bunch of money locked up in the government monopoly," he says. "Let's crack open that market so that companies have a chance to make some money." And now reformsters are finding ways to decide that the previously-odious Trump is maybe not so bad after all. They can have everything they want (except, maybe, Common Core) as long as they're willing to give up the pleasant fiction that the charter revolution has any principles behind it other than "I would like some of that mountain of money for myself."

Once you start to realize that Trump is about the status quo-- not in new clothes, but in no clothes at all-- it seems kind of obvious.

Someone (I've lost the link) argued that Trump's fascism has swept aside neo-liberalism. Nonsense. Fascism and neo-liberalism get along just fine. Trump is neo-lib all the way. Health care? Let people deal with it with their own personal health care account. Pensions? Same thing. Plenty of money in both for entrepreneurs interested in managing all that money. That infrastructure plan turns out not to be a revival of FDR's New Deal, but a scam for funneling all public works projects through private investors so that they can feast on tax dollars. And schools, of course. Trump is ramping up to privatize everything, to turn every government into a generator of profits for the private companies that will take them over. Is that hard on poor people? So what? Who cares? Trump is leaning into the same neo-liberalism beloved by Bush and Obama-- he just isn't bothering to pretend that it's anything but a business maneuver.

Even in the little things, Trump is more naked than new. Should we be outraged that he will use the office of the President to enhance his private industry. I suppose so, but I have a hard time getting worked up over this one-- for decades our government folks, elected and appointed, have conducted their work with an eye on their own profit and advancement. They've just tried to be smooth and discrete about it, but Citizens United simply ramped it up-- all of our representatives are busy enhancing their own financial standing, and they're open to being hired by God-knows-who, with payday coming every year there's an election to get ready for. As in many things, Trump hasn't said "Let's change the game" so much as he's said, "If we're going to do this, let's really DO it."

Ditto for racism and misogyny. These are not new things, either in DC or the rest of the country. It's just that Trump, unlike Nixon or LBJ, is not trying to pretend that these aren't a huge part of how many folks operate in this country. Richard Spencer and Steve Bannon weren't born yesterday; they just kept their heads down and we all got to pretend that such ugly, ignorant, racist jackasses weren't part of the US political landscape.

Favoring whiteness, maleness and Christianity over other parts of the American tapestry? Check, check, and check-- it's just usually we're more...subtle....about it.

Certainly his rogues gallery of appointments doesn't mark anything new or different. It's shaping up to be yet more guys who represent the same old monied and power interests, but who lack the grace or cleverness to conceal their venality.

His one unique quality might be his extraordinarily thin skin and a mouth that can move quickly, unconnected as it is to any anchoring brain or thoughtfulness. Still, I don't know-- is it better to squawk anger on twitter, or to command the FBI to start keeping an enemies file on everyone you would otherwise squawk at. Exactly how much love has our government thrown at the First Amendment in the last several decades.

Don't get me wrong. Trump is an indefensible asshat, a lazy con artist and a spirited liar, no more fit for the Presidency than a rabid sewer rat.

But I am coming to believe more and more that his difference is one of finesse, not substance. We are used to having our politicians piss on us and tell us it's raining. Donald Trump just pisses on us and declares, "This is the best piss ever. A great piss. A huge piss."

It remains to be seen how quickly the realization will spread among his followers that they have gotten the same old same old, just without a pretty bow. It may be ugly, or they may forgive him. Certainly the "hold your nose and vote" crowd are already sick of seeing Trumplandia in all its naked glory. I'm not prepared to make any prediction yet, other than his faithful are not going to get what they wanted (and that, too, is nothing new-- check with the evangelicals that Bush II used and discarded, or the progressives who lost all faith in Obama). We'll see how it all plays out.

In the meantime, here's the task for the rest of us. Maybe the horrible features of Trumplandia seem worse because they're in plain sight; maybe they're worse because air is helping them grow. Maybe it's some combination of the two. But I think maybe we need to start looking at the ways that a Trump administration is not really very different at all from business as usual. The next few years will be a great chance to practice resistance and pushing back against an administration that will be obvious and clumsy at every turn. I hope that we are wise enough to keep those skills handy when Trump's successor returns us to "normal," a land where all of the same bad policies, ugly prejudices, and indefensible abuses keep on thriving-- just back under their pretty clothes. Because if we look at Trump's latest outrage and said, "No other real politician would ever do something so awful," we are kidding ourselves (Exhibit A: Mike Pence). Other politicians might dress it up better and make it prettier.

Trump has no idea what would make America great; the best of us had damned well better remember. There is much that is beautiful and strong and generous and awesome about this country and its people, much in which to take pride. We are, on our best days, a good and great people, varied and rich, decent and given to a kind of gut-level genius for finding ways to rise and advance with a deep voice filled with such glorious variety. We have let our nation's politics become infected with ugliness, venality, and the least admirable impulses we know. Trumplandia will show us all of the worst of us in its raw, naked ugliness. If there is anything good to come out of the next years, let it be that we learn to recognize that ugly naked normal so well that it will never again be able to hide behind nice clothes.
Posted by Peter Greene at Tuesday, November 22, 2016