Will Trump Kill the Core

Apparently one more side effect of Trumpocracy will be the revival of half-baked, ill-informed writing and bloviating about Common Core. Let me do my part to add to that. 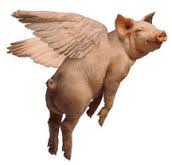 Trump has, of course, promised to rid the world of Common Core, even though he has no idea what it is, what's in it, how it works, or how it is implemented. This may well actually happen when pigs fly. But this is the perfect cue for writers like, apparently, NPR's Cory Turner to redistribute some of the same misinformation about the Core.

In "Can President Trump Get Rid of Common Core," Turner brings back the old fiction about where the Core came from:

The Common Core standards were developed by governors and state school superintendents and adopted at the state level. They were not created by the Obama Administration or forced on states. Indeed, several states chose not to make the switch. That said, President Obama did use federal dollars, through the Race to the Top program, to encourage (critics prefer "coerce") states to adopt new, more rigorous standards. And, in the throes of a downturn, that extra school money was a powerful enticement.

Actually, I prefer "blackmail" or "extort," but I suppose "coerce" is politer. It's certainly shorter than, "Either you implement my programs or I use your inevitable and unavoidable violation of No Child Left Behind laws to cut off your federal financial support." But the Common Core Standards were most certainly not developed by governors and state school superintendents. They were written by a handful of education amateurs, pushed by Bill Gates and other well-connected amateurs, financed by many of those same folks, and adopted by states under so much political pressure that some states didn't even wait for the standards to be finished.

Turner fails to talk to anyone outside the circle of Gates-funded Core backers (Achieve, the Fordham Foundation) and when he turns to a critic (Neal McClusky, Cato Institute) still stays within the conservative thinky tank sphere.

What Turner gets right is the effect of the Every Student Succeeds Act (the NCLB replacement) which is pretty firm and direct in forbidding federal meddling in state educational issues. Of course, ESSA still comes down hard for "college and career ready standards," a phrase which is to Common Core what "states' rights" is to segregation.

At this point you can't drive a stake through Common Core's heart because it is a vague and diaphanous cloud of toxic mist.

And, as Turner reports, Trump is already slinking away from his pledge. Asked about it by EdWeek, transition team education guy Gerard Robinson had this strong, ringing statement to make--

To be determined. But he will expect his secretary of education to have something to say about common core

Something to say!! Hoo boy-- I bet the Common Core is shaking in its invisible boots right now

Common Core needs to be rooted out, stomped flat, and burned with fire. But none of those things will be accomplished by people who don't even know what they're talking about. Perhaps Trump will appoint someone with real education expertise and knowledge to the secretary position. And perhaps pigs will fly out of my butt.