For the past several years, I have sometimes felt like Indiana Jones just a few feet in front of the damn giant boulder.

This is not entirely the result of various education reforms. We've been through some changes locally, including but limited to some schedule changing that has resulted in slightly shorter periods, and some changes in staffing that have led to slightly larger classes. 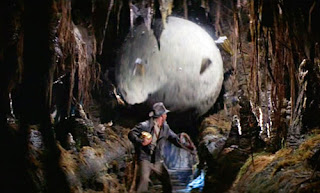 But of course like many other schools, we are being trickled down upon by the dripping ooze of school reform. We have lots of additional paper-- well, computer work that is meant to show how we're aligning our instruction to the standards (spoiler alert-- mostly by completing computerized paperwork). We spend time worrying about the numbers and part of my week is now set aside for sitting and fretting over various slabs of data. And when you add up all the days I lose to testing, or pre-testing, or practice testing, it all adds up to days and weeks of school during which I don't get to actually teach.

Meanwhile, the mountain of material that I feel I should be getting through looks more and more like, well, like two mountains, piled on top of each other and sitting on top of a third mountain that has been smushed into the ground so far that I'll have to dig it all out before I can deal with it. And so there is a voice yammering away in my ear, strained and urgent, reminding me that I only have X days left and if I don't hammer through this stuff today, and quickly, I'll never get to the other material which I really need to get to because these students are less than two years away from going out into a world that will demand every possible skill set from them and oh my good lord in heaven how am I ever going to get anything done if they want to talk about stuff and holy crap the boulder is right on my heels-----

Today I used an exercise that I absolutely do not recommend for anyone. I started my forty minute classes with twenty minutes of material.

My solution is not the obvious one; I'm not allowed (by me) to fill up a class period with "study hall." The taxpayers pay me perfectly good money to work with students. So I have to find those other twenty minutes in the moment, in my students' concerns, in whatever jumps up and demands attention. I do stack the deck in my favor-- I don't try this on a day where, for instance, the lesson is about participial phrases. Today I wanted to talk to my students about what skills they think they'll need for adulting that they think the school hasn't, or may never, provide. And because I don't have enough "teaching" to fill the period, I have to shut up and let discussion flow. Maybe I listen. Maybe I prime the pump. Maybe I'll tell a personal story (my pedagogical justification being that modeling vulnerability in a safe place is important, as is their seeing that I'm a human). I can't plan this, not for every single second. I have to slow down and listen and watch and be there.

I confess that I used to work like this more often, and I'm not proud of doing it less. If I'm not careful, instead of a safe place where everyone can be heard and relationships are built, my classroom can become a racquetball court with one of those tennis ball cannons sitting in a corner firing off a ball every ten seconds. But we change in our practice-- when I began teaching, I had to put all my effort into creating energy, pushing it out, pumping it out, being, as my co-op said, punchy-quick. I was a quieter, more guarded person then. Now, in a classroom, I have to be sure to breathe, to lay back, to listen.

It's important to remember that while we are there to do the work, our conception of the work has to include the students as actors, as co-conspirators, as participants with agency. One of the most corrosive aspects of the modern reform movement is the conception of education as something that is done to students, who are supposed to sit there passively while we perform our magic tricks and pull numbers out of them like so many standardized rabbits out of identical hats. We can not, must not reach the point where we are so focused on getting away from that giant boulder that we trample right over the students in front of us.