There's an aspect of Candidate Trump's success that I think is both under-discussed and also a good lesson/reminder for those of us in the teaching biz.

Seriously. Members of the public would figuratively run up to him hollering, "Good lord, did you see this terrible story on the internet," and without batting an eye, Trump would respond "I know!! Incredible, right?"   Like Walt Whitman, he could declaim at length about his own awesomeness without ever having to belittle the crowd around him to embiggify himself (because he's just that awesome). He is large; he contains multitudes. 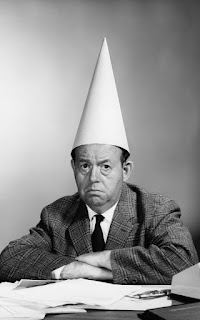 Meanwhile, Clinton could not avoid making people feel stupid. She was the stern one, incapable of not figuratively rolling her eyes at the latest stupid thing that voters had said. She would point out something stupid that Trump had said, not understanding that her message was, "How stupid do you have to be to believe this guy?"

People hate feeling stupid. Hate it. But Trump, with all the basic markers of success like money and fame and arrogance-laced confidence, still managed to say to voters, "Hey, you're all cool." And he augmented that with a natural instinct for the use of third person-- the people who were stupid or bad, those people were "them" or "they." Trump invited folks to join him in being the smart one, the smartest one of all, so smart you wouldn't even believe the smartitude. Meanwhile, Clinton et al just couldn't help letting it slip how dumb the think the yokels are, or trying to move the discussion to questions of facts and data and policy and ethical issues like how to treat other human beings, and all that wonky smarty-pants book talk also made some folks feel stupid. You've got a choice between people who make you feel stupid, and people who make you feel cool and smart-- who are you going to choose?


Certainly that was not the only dynamic at play, but it's the one I'm interested in at the moment. And, for our purposes, I'm going to skip the whole question of whether some people feel stupid because they are stupid. For the teaching perspective, that doesn't matter. Or rather, it matters because we deal professionally with people who Don't Know Some Stuff.

What we need to remember is the graphic, clear display of what people do when you make them feel stupid-- they feel resentment and anger and they step into a voting booth and vote to get rid of you.

Everyone has had that teacher-- that miserable, awful teacher that made students look stupid, feel stupid. Everyone who had that teacher remembers that teacher because they hate that teacher. If they could have voted to get rid of that teacher and replace her with Mrs. Trump, the nice one who makes everyone feel special and lucky to be in her awesome classroom, they would totally do it.

Sometimes teachers take a cold, hard, Darwinian-libertarian approach-- if you don't want to feel stupid, then study and be less stupid. But as this election reminds us, that is not how people work. Make people feel stupid and they quit. They block you out. But make them feel smart and important, valued and clever, and they will go to the wall for you.

We've occasionally tried to codify this. Recognizing "ebonics" was in part a recognition that approaching some students with a stance of, "You must be stupid if you talk like that" was not really helping anyone.

So that's one teachable reminder-- when you make people feel stupid, they get angry and withdrawn and uncooperative. And if you need to be reminded again, just watch for the next year as Trump turns out to have lied about most of his campaign promises, and a whole bunch of people get to feel stupid, again.
Posted by Peter Greene at Wednesday, November 16, 2016