Wells Fargo and Making Your Numbers

As you've probably heard by now, Wells Fargo got caught building its financial strength by a technique known variously as lying, fraud, or just making shit up. Low level employees created a bunch of fake accounts linked to actual humans who had no idea their financial matters were becoming messier by the minute. At the end of the day, 5,300 low-level employees were fired, and nobody who was responsible for those employees suffered the slightest penalty.

So what does this have to do with education? 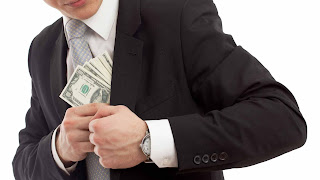 Well, first, it's one more occasion to invite those who insist that teachers should have to face accountability measures "just like they do in the real world"-- well, those folks can just shut up. The accountability faced by executives like CEO John Stumpf was exactly zero. As Elizabeth Warren, in her highest dudgeon, dragged out of him, the entire sorry episode didn't cost him a penny and didn't cost a single high-level executive their job. This is the same "real world" accountability faced by the guys who messed up Enron and tanked the world economy in 2008-- absolutely none at all.

But mostly it's a pretty stark example of what can happen when an organization becomes focused on making its numbers.

Considerable pressure was put on front line employees to make their numbers, and employees who tried to call attention to how the business was being warped by its perverse incentives were soundly spanked and, in some cases, ruined.

When you install shortcut proxies for actual success, and you create very high stakes around those numbers, you completely change the nature and purpose of the institution. Wells Fargo didn't just cheat and defraud customers as a matter of policy; they transformed the very nature of the company from a business built on providing customer service  to a business built on making numbers. Customers were no longer people to be served, but resources to be tricked and defrauded into providing the company what it needed keep its stock rising and its executives fat and happy.

This is Campbell's law in action-- when you use a too-simple number as a measure of a complicated network of relationships and goals in an organization, you completely twist and ultimate warp the very nature of the things you are trying to measure. When you create do-or-die goals that are impossible to meet legitimately, you corrupt the organization and make cheating the preferred culture of the institution. Those who won't cheat, who won't do whatever it takes to make their numbers, are driven out. What did the data on new accounts and instruments tell executives about how employees were doing their jobs? Nothing. Nothing at all.

It is easy to think, "Well, even if the data numbers don't exactly precisely show us what we want to see, well, at least their something, and something is better than nothing, right?" But the Wells Fargo fiasco is a reminder that chasing bad data results is not harm-neutral. And scores or simple numbers are always bad data, because to simplify complex information to a simple number or two always means losing the full picture. It's trying to judge the health of the jungle by weighing elephant toenail clippings-- you'll always be looking at a warped and limited picture, and so trying to make your numbers will always screw up your whole system.

You can argue that Wells Fargo executives are money-hungry greed-hounds, and that's what created the problems. It certainly greased the skids, but the mechanism that caused the entire organization to lose its way is the pursuit of bad numbers.

Using this kind of bad data is a lie. Saying "If our employees are selling more of this product, we are fulfilling our service mission as a bank is a lie." Saying "If students are getting higher scores on the Big Standardized Test, then they are getting a great education and our schools are thriving" is a lie. And when you base your mission and your critical relationships on a lie, destruction follows.