So, Jeb Bush is going to be a visiting fellow at Harvard at the Kennedy School's Program on Education Policy and Governance.

I suppose he could open his lecture with a recap of all the educational successes he had in Florida with programs that helped teachers teach and led to greater students success, but after that two minutes were up, what would he talk about for the rest of the time. 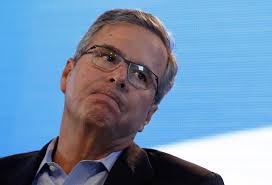 It is easy to imagine the many edifying lectures he could present. There's "How To Use Letter Grades To Grossly Oversimplify A Complex Human Service and Crush the Spirits of the People Who Work There." Or for the more business oriented crowd, "How To Dismantle a Public Service for Private Profit" as well as "How To Create an Astro-Turf Organization." And of course folks would line up for "Don't Build the House of Your Presidential Ambitions on the Sand of Your Education Policy." Maybe he'll even visit the philosophy department for "The Unbearable Angst of Watching All Your Hopes and Dreams Turn To Dust."

Presumably each lecture by Bush will conclude with a plea for the students to "please clap."

Harvard also announced other visiting fellows. Over at the medical school, Bob Phlegm will be lecturing on medicine and the proper uses of pharmaceuticals. Says Phlegm, "I should be great at this. After all, I've been to the doctor and had drugs prescribed. Also, I used to get high when I was a teenager. So I figured I'm as qualified to lecture about medicinal herbs as anyone."

Britney Spears will also be appearing as a guest lecturer on brain surgery. Said Harvard spokesman, "She once shaved her head, which is where the brain is located, so she's a qualified expert."

"Also," the spokesman continued, "we're going to get Kim Kardashian in here for something. I'm sure she has many areas of expertise, and lots of name recognition, and she's pretty rich, too. So, you know, we'll find some department for her to lecture in."

It is hard not to feel a little bit sorry for Jeb! at this stage of the game. This is a guy who spent his entire life building a big, beautiful sand castle with hopes of winning the big sculpture contest, only to have the castle ignored by the crowds and kicked over by some cheeto-faced baboon.

On the other hand, this is a guy who believes in the power of meritocracy and grit, so I think it's fair to ask what exactly qualifies him to talk about anything related to education other than dismantling it for fun and profit. Where are his successes? What is the merit, other than a famous name, a family fortune, and a lot of connections, that Jeb! Bush brings to Harvard's crimson table?

Jeb! wants to unleash the power of the free market on schools, forcing those that "fail" to fold up and go away, and those that provide "value" should prosper. So I have to wonder-- what free market forces determine that Jeb! is somehow entitled to function in this universe as an educational expert? What successes can he point to that reasonably lead the free market to reward him for his expertise? Yes, he has been successful in imposing and advocating for bad education policies that have consistently failed to work, so I guess he might be a good fit for lectures about marketing.

Maybe it's just that for children of Great Privilege, Harvard lecturer is such a step down from Leader of the Free World that this is what passes for failure (may my friends and I all fail so badly some day). Maybe it's name recognition-- after all, Lindsey Lohan kept getting cast long after anyone thought it was a good idea because her name brought customers in.

But education expert and lecturer? I'm pretty sure Harvard can do better, can provide meaningful and useful teaching about public education, if they're so inclined. Selecting Jeb! is just further proof that their inclinations run another direction.