The Word Charters Leave Out

The sales pitch, in various versions, pops up every time charter cheerleaders are pushing charters as the Big Solution in education. 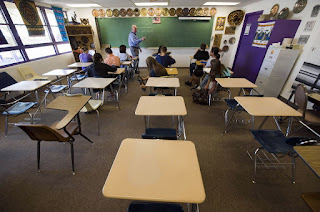 "We know how to educate poor minority students."

The implication, of course, is that public schools don't know how to get the job done. The use of civil rights rhetoric further pushes the idea that charters can rescue non-wealthy, non-white students from a public school system that either can't or won't provide them with the education they need and deserve.

The problem with this assertion, however, is the words that charter fans invariably omit from the pitch.

As in, "We know how to educate some poor minority students."

And that's a problem. That single word is the difference between a pitch that makes compelling sense and one that is simply a pack of weasel words. Let me tell you why.

I'm going to skip for the moment my usual objections that the measures being used to determine whether a school is successful or not are grade-A useless baloney. Let's just pretend for the moment that we know how to measure student success.

And we can also insert my usual disclaimer here that not all charters are problematic, and particularly back before the rise of the modern investment-driven hedge-fundie charters, there have been charters that have truly added to the public education landscape. So I don't automatically hate charter schools.

I'm also going to acknowledge right up front that we have many schools and school districts that are not doing right by non-wealthy non-white students. That problem is real, and I am not going to pretend for a moment that if we just make modern charter schools go away, things will automatically be both hunky and dory.

So, what is the problem with--

We know how to educate some poor minority students

The public education gig is to educate all students. All. Students. Not some, not a few, but all. One of my objections to the rise of the modern charter is that it's a quiet re-write of the public education mission-- let's stop trying to educate everyone and just focus on the chosen few, and put Those Children in the underfunded holding pen that we'll call public school.

Some charter fans are open and honest about this; Mike Petrilli has noted that a charter mission should be to give "strivers" a place to get away from Those Other Students. But other charter fans deliberately obscure their omission of "some" and tout their ability to get good results with a few students as a sign that they know something that public schools do not.

I think this is one of the things about modern charters that absolutely drives public school teachers nuts. Charters want to claim that because they can achieve success with a small, select sample of students, they Know Something About Education. Dude, those of us in public education have known since forever that if we were free to pick and choose our students and could just get rid of the ones who don't want to learn the way we want to teach, we would look like education rock stars. Everyone knows that.

So when Boston charters start talking about their awesome results without also talking about their awesome attrition (and non-backfill) rates. When your charter system can point to a grand total of fifteen black males who went on to graduate from college, you are not showing us anything that public schools couldn't quickly and easily replicate-- if we were allowed to change the nature of the gig (see problem #1).

Some charters cream, deliberately, as a matter of policy (like these charters in California that got caught). Some cream more organically by targeting particular parts of the market with their advertising, and of course all charters self-select for families that are more involved in their child's education (and ask any public school teacher how schools would change if we had only the students of families that cared about education).

And we don't talk enough about the importance of the no-backfill rules in operation in many charter markets, guaranteeing that no new students ever come in in the middle of a multi-year program. Again- we already know that no-backfill would work, but that's not the public education gig.

There are charter fans who know better. Chris Barbic left the Tennessee Achievement School District noting that it's hard to raise the success rate of schools when you have to keep all the students that live in that school's community.

Anybody can do a good job of educating some students. Modern charter advocates should stop pretending they have invented the wheel. And if they really want to be honest, they can start using that one simple word-- some.