This is just exceptional.

In mid-August, Brookings released a report looking at the huge inequity in the teacher force, specifically the question of how to get more teachers of color in the classroom. Their conclusion, loosely paraphrased, is that the problem just can't be solved. Which seems, I don't know-- counterintuitive? improbable? wrong?

There are some red flags in this report. Right up front we note that two of the authors of this report are Hannah Putnam and Kate Walsh, "director of research" and "president" respectively of the National Council on Teacher Quality. In all the world of reformy groupd, none deserve to be taken seriously less than NCTQ, a group that has evaluated teacher education programs by looking at commencement programs, judges a teacher evaluation system based on whether or not it fails enough teachers, and whips up the US News college awesomeness list by flipping through college course catalogs. You can find critiques of its methodology here and here and here, though nothing quite beats the experience of sitting across a table from a college professor angry for being downgraded by NCTQ based on a program that her college doesn't even offer. NCTQ consistently produces the least-rigorous, least-credible research in the education world, and their technique seems to be to reverse engineer it, starting with the desired headline. NCTQ's presence here is a clear signal that this report is not to be taken seriously.


Nevertheless, I'm going to read this you don't have to.

The paper opens with an overview and history of teacher diversity (and the lack thereof). This is basically a compendium of other folks' work and some data, and to their credit, the authors at least include some of the arguments about why increasing diversity in the teacher force to reflect the diversity in the student population is a Good Thing.

So why don't we have more non-white teachers? The authors come up with several places where the pipeline has sprung a leak.

So basically we're losing teachers of color at every single point of the pipeline. We could quibble a bit at this point-- some sources disagree with #3, for instance. And the authors' consideration of #4 fails to note that one factor in retention of non-white teachers is mass firings of black teachers (e.g. New Orleans and Chicago) and the reformy closings of predominantly black and brown schools.

But as it turns out, we don't have to get into anything all that granular, because now we've established the background and analyzed the problem, so we're ready to do the heavy research needed to consider possible solutions. And the paper considers each possible pipeline hole in turn and asks "what would happen if we fixed that." Mind you, it doesn't ask "how would we fix that" or "what are the different ways we could try to fix that and how relatively effective would each of those techniques be." And each of the four considerations is accompanied by a graph. I'm going to paste just one of those graphs here; let's see if you can spot the flaw in their research method-- 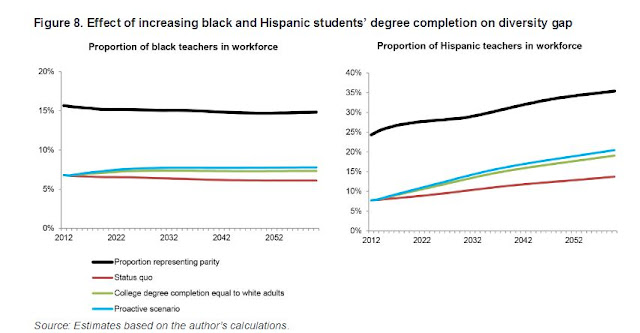 Source: Estimates based on the authors' calculations.

Seriously. That's the basis of this whole paper. "We spitballed some back-of-the-envelope numbers and this is the best we think we can do." But the good news is that they do figure that if we plug all four holes at once "setting aside the practical considerations about resource allocations and limitations" there would be parity between black teachers and black students in 2044. Hispanic parity would not come until... well, some time after 2060, because at 2060 they ran out of space on the back of the envelope.

Now the paper moves into the Just Thinking Out Loud portion, where the authors deal a bit more in specifics. How exactly do we get this train a-rollin' down the tracks?

In our view, the fundamental bottleneck here is not so much the failure of efforts by districts’ human resources offices to hire and retain trained minority teachers (in truth, changing hiring practices can barely nudge the needle on teacher diversity); rather, the problem comes both from the low rate of college completion by black and Hispanic students and then the inability to persuade them to consider a career in the teaching profession.

So this is not so much an actual "research" paper as just an "in our view" paper. Good to know, on page 15/24. But the good news is that we know all about making teaching more attractive, and about getting students to finish college. So, you know, just do that stuff.

However, they caution us, don't get so excited about quantity that we overlook quality. Did I mention that earlier they said alternative initiatives like TFA were swell, but not big enough to really help?

At any rate, this will be a long term solution. Does the research general idea-thinking suggest any short-term solutions? Well, schools could "leverage" other staff positions to get some non-white folks in there with the students. Schools could put policies in place to "mitigate" the effects of white racial attitudes on students of color. That would have been an interesting paper, but here it's just a paragraph. Third, teachers can be educated about the effects of the diversity gap. So, more professional development? That should totally help.

And it's all over but the references pages.

This is a serious issue that deserves serious consideration and should be addressed by serious solutions. I do not know what this report is, but it's definitely not serious, which is unfortunate.

Honestly, some days I think I should just incorporate myself as the Curmudgucation All-Beef Baloney Sandwich Institute, get myself a fancier header and start fishing for grants to fund whatever writer-babblings I wanted to pull out of my butt so that I could essentially do what I always do, but get paid in money and fame (you know-- on top of the fame I'm already earning). Instead of lowly blog posts I could issue "reports." I could put graphs with them, and I estimate that by 2027 (probably around the second Tuesday in May) I could retire with enough money to buy a really nice car. Maybe then I could become an economist.
Posted by Peter Greene at Sunday, September 04, 2016
Email ThisBlogThis!Share to TwitterShare to FacebookShare to Pinterest