While astro-turf group Students Matter, a front for the reformster activism of Very Rich Man David Welch, is most famous for concocting and then losing the Vergara case, they have been trying to skin the reformy cat with other knife-like lawsuits as well. 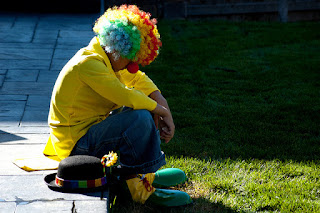 With Doe v. Antioch, Welch's group set out to compel thirteen California districts to include Big Standardized Test results in teacher evaluations. To do so, they dragged out the Stull Act (a law old enough to have been signed by Governor Ronald Reagan). The law (also amended in 1999) was supposed to require districts to base teacher evaluations on student test scores-- but it has the words "reasonably relate" which are, depending on your point of view, a necessary bit of slack to allow schools to handle the problem of alllllll those teachers who don't teach tested subjects (how exactly do you tie the evaluation of your phys ed teacher to the results of a math and reading test).

School districts have made use of that wiggle room, and reformsters have periodically waxed cranky over the wiggling.

We have actually been down this Via del Lawsuit before-- back in 2010 Doe v. Deasy was filed in Los Angeles by EdVoice, the group used as a front by Eli Broad, Reed Hastings and Richard Merkin. The case dragged on for a while and ended in a sort of draw, with reformsters and the teachers union each getting a little bit of what they wanted-- the district could include test scores, but would have to negotiate with the union about how much the tests would count.

So Welch and his crew went back to the court to see if they couldn't do better with some Bay Area districts.

The answer was no, no they couldn't.

You can read the forty-page decision here, but Contra Costa County Superior Court Judge Barry Goode essentially determined that the law does not clearly say what Welch's group says it clearly says. While it says that districts must do some assessy things with students and some evaluaty things with teachers, the twain are not clearly required to meet.

Goode also digs through the history of the act and its four different sets of amendments (1975, 1983, 1995, 1999) to see what legislative discussion might shed light on the law's intent, and he again finds nothing to indicate that testing and teacher evals were meant to be inextricably linked.

In other words, he considers what the law doesn't say as important as what it does say. Goode rather charmingly puts it this way:

That is something of a “dog that did not bark.” If the Legislature were to have changed, so dramatically, the rules for the evaluation of teachers (as Petitioners argue), then the committee or floor analyses would likely have apprised members of that. Indeed, given the controversy over standardized tests, one would expect there to have been considerable debate and public discussion of such a change.

Goode hears no barking dog, and the barking of Welch's legal team is not enough to convince him, though bark they do:

Marcellus McRae and Joshua S. Lipshutz, the lead attorneys for the Doe v. Antioch petitioners, which included both California teachers and parents, issued a statement blasting Goode’s ruling. “A teacher evaluation that ignores student learning is a farce that serves neither students nor teachers,” they declared. “The decision ignores this basic and indisputable logic and renders the Stull Act meaningless.”

Probability that the decision will be appealed seems high.

Their complaint is, of course, bogus. Well, no, that's not quite right-- a teacher evaluation that ignores student learning is a farce that serves nobody, and when your teacher evaluation is based on bad data gleaned from bad tests, that is exactly what you have. Their presumption that BS Tests scores are valid measures of student learning-- that's the bogus, unsupportable baloney part. That, however, is beside the point in this case.

But in the meantime, the lawsuit demonstrates once again the danger of filing a lawsuit in hopes of "clarifying" a law-- sometimes it turns out to clearly mean something different than what you hoped for. For the moment, no school district in California is required to make student scores in the Big Standardized Test a major part of teacher evaluations.
Posted by Peter Greene at Friday, September 23, 2016