The US Department of Education and Secretary of Education John King are out with a one-two punch of silly bureaucratic blather and revisionist history. 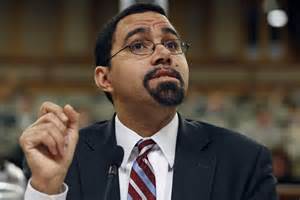 Punch Number One-- Some Friendly Guidance

So let's start with the blather. I'm not entirely sure what the word "investments" is doing in there, other than the Department's love for the business world. The twelve-page document is designed "to help SEAs, LEAs, schools, educators, partner organizations and other stakeholders successfully choose and implement interventions that improve outcomes for students."

The Process (and Irony)

Okay, listen carefully boys and girls, because this is some pretty heavy-duty stuff. Here's the process for implementing evidence-based interventions:

Oh, and there's a graphic-- five balls in a circle with arrows pointing from one to the next. I think I speak for Americans everywhere when I say thank God there are federal bureaucrats out there willing to provide us with this kind of hard-hitting guidance, because God knows, we would all be out here spinning our wheel randomly. Granted, I've translated the Department's guidance into what I like to call "Plain English," but I am absolutely stumped as I try to imagine who was sitting in DC thinking that this needed to be published. Was someone sitting in the Department saying, "You know, I bet people don't understand that they should pick out solutions that will fit the problem. They're probably picking some other solution. Probably a bunch of school districts out there thinking they need a new math series to get their reading scores up. We'd better address this. Oh, and add a graphic."

Yes, there are people who mess this five-step process up-- but those people know perfectly well what the process is.

In fact (and here's the irony part), it's hard to imagine this document being produced by the process that it depicts. Which local stakeholders were consulted, what data collected that resulted in a needs assessment tat said, "School districts don't know the process for implementing programs." And then who scanned the world of possible solutions and said, "The best answer to this problem is to publish an encyclical with a graphic." And how will the department be following up on this to see if it worked.

See? The fact that you can list the steps of a process doesn't mean you can or will implement it (and there is a whole rant about the efficacy of competency based education that goes right here, but I can already see this is going to run long).

What Does Evidence Mean, Anyway?

Strong Evidence means there's a least one good research paper that suggests the intervention will improve student outcomes (which, of course, actually means "raise test scores") or a related outcome (which means whatever you want it to). There should be no legit research that contradicts the findings, it should have a large sample, and the sample should overlap the populations and settings involved. In other words, research about rural third graders in Estonia does not count if you're looking for an intervention to use with American urban teens.

Promising Evidence requires a correlation study because (and this really explains a lot) even the federal government doesn't know the difference between correlation and causation. I just smacked my forehead so hard my glasses flew off.

Demonstrates a Rationale, like Promising Evidence, somehow doesn't appear on the No This Doesn't Count list. All this means is you can make an argument for the practice.

All four of these are enshrined in ESSA and the US Department of Education's heart as "evidence-based," even though a layperson might conclude that at least two of them are sort of the opposite of evidence-based. Hell, by these criteria Donald Trump is currently mounting an evidence-based campaign for the Presidency.

"We have made major progress during this Administration in directing investments in education to evidence-based strategies," U.S. Secretary of Education John B. King Jr. said. "Relevant, rigorous evidence must be an essential part of a strong framework for decision-making. We hope this guidance will help decision makers as they consider, choose, implement, and refine their strategies to support students."

This administration has given us

* support for Common Core
* forced implementation of Big Standardized Tests
* insistence that results of BS Tests be proxies for student achievement
* required use of test scores as measures of teacher and school quality
* advocacy for and investment in charter schools
* mandate for "fixing" students with special needs by just expecting them to do better
* endless push for computerized learning
* policies based on premise that students who get higher test scores will get better jobs, better life
* assertion that school districts and teachers routinely lie about student achievement
* list of approved and allowable strategies that must be used for "failing" schools
* extension of federal oversight and management of state and local school systems
* Race to the Top
* School Improvement Grants
* and other program based on the notion that competitive grants are the best way to fuel improvement


None of this was evidence-based, not even by the fuzzy definitions above. In fact, the more evidence rolled in, the less evidence-based any of it appeared to be. To call this bureaucratic basket of baloney "evidence-based" or "successful" requires a disconnection from reality that would make Don Quixote look hard-nosed. If it's a deliberate lie an act of political spinsmanship, it is a whopper of trumpian dimensions.

The last eight years ended with Congress, a body that has been incapable of bipartisan agreement on anything, bipartisanly agreeing that the Department of Education had overstepped and screwed up. I suppose we could argue that the Department was "successful" in that it pushed Congress so far that they finally got off their butts and re-authorized ESEA. But that reauthorization included an actual attempt to take power away from a federal department, something that happens roughly as often as parades of unicorn-riding yetis on Pennsylvania avenue.

This is all part of the most recent part of the Opportunity Across America tour, in which King takes a bus ride while cheering for high quality education, uplifting teachers, and affordable college. It is a push for the idea that education will end poverty, yet another assertion that is not evidence-based. It's also doubly damaging because it suggests that the entire battle against poverty and poverty's effects can just be dumped on the schools and no other efforts need be made.

King has done several of these. I have a new theory about why he keeps taking these road trips-- I believe that King is searching for the portal back to the alternate universe that he keeps describing. I have no real proof or data to back up this theory, but I'm going to go ahead and call it evidence-based anyway.

Posted by Peter Greene at Saturday, September 17, 2016
Email ThisBlogThis!Share to TwitterShare to FacebookShare to Pinterest