The question is up for pseudo-debate once again because of the National Labor Relations Board decided in two separate cases that charter schools are private corporations. 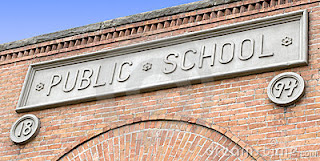 The decision is new, but the fact that charters are private businesses is not. While charter fans are trying to act shocked and surprised., I'm just going to go ahead and link, for the six-zillionth time, to that special occasion when Eva Moskowitz successfully took New York State to court claiming that they had no right to audit her private corporation. Charter operators have always claimed to be private corporations when it suits them.

Neal McClusky of the right-tilted Cato Institute expresses concern that this is part of union efforts to unionize charter schools. That's understandably a concern, since many charter operators depend on at-will employees that can be hired, fired, and paid as the operator wishes. McClusky's argument is that charters are public because some public entity has to give them the right to exist. I'm actually wondering if McClusky was badly quoted in the piece, because that seems like a sloppy argument for him-- "given the right to exist by a public entity" includes every business that had to meet zoning requirements and every Wal-Mart that got its lot by having local government use eminent domain.

McClusky's concern about the machinations of the teacher union may be misplaced. Some folks in the teaching biz are a bit leery of unionizing charter schools because that makes the union a stakeholder in that charter. Charter fans may well want to welcome an opportunity to co-opt the unions, even if it means they will have to offer their employees decent pay and working conditions.

Why are charter schools so attached to the word "public," anyway? Charter backers are insistent about "public," attaching it to the word "charter" every chance they get.

It makes sense as a political maneuver. Think back to how many folks are vocally opposed to Bernie Sanders' idea of "free" college for students, which the opposition views as students getting to go to college at taxpayer expense. It's another evil "entitlement." But what are charter school systems except an entitlement for K-12 students to attend a private school at taxpayer expense? So let's not say "private school."

But Emma Brown's Washington Post coverage of the decision includes a quote that probably best captures the charter industry's love of "public"-- it is a critical piece of marketing.

But Ziebarth [Todd Ziebarth, senior vice president at the National Alliance for Public Charter Schools],said he still believes that charter schools are public schools. And it’s a term that matters, he said: Americans have high regard for the importance of public education, and private schools carry connotations of exclusivity that don’t apply to charters.

When people hear "public schools," they make a whole bunch of associations and assumptions that charter schools proceed to take advantage of.

It is, in essence, the greatest branding coup ever. It's like a new hamburger chain getting government permission to call themselves McDonalds. It's like a new automobile manufacturer getting government approval to slap the Ford nameplate on its cars. The new business gets all the benefits of being associated with the old brand, yet when it encounters anyone who doesn't love the old brand, they can just say, "Well, we're actually different and better."

So the NLRB decision is mostly bad for charters not because of its implications for unionization or lawsuits, but because it hurts their branding. It hurts the marketing. It's bad for business. But good for public schools.