The United States Department of (Privatizing) education is touting another boneheaded idea, this time aimed at preschool and using yet one more unproven approach-- pay for success.

What is that, exactly? Here's the explanation from the USED FAQ page:

Pay for success (PFS) is an innovative contracting and financing model that aims to test and advance promising and proven interventions while paying only for successful outcomes or impacts for families, individuals, and communities. Through a PFS project, a government (or other) entity enters into a contract with an Investor to pay for the achievement of concrete, measurable outcomes for specific people or communities. Service providers deliver interventions to achieve these outcomes. Payments, known as Outcomes Payments, are made only if the intervention achieves those outcomes agreed upon in advance. The government (or other) entity makes Outcomes Payments to repay Investors for the costs of services (and sometimes other projects costs) plus a modest return. Ideally, Outcomes Payments amount to a fraction of the short- and long-term cost savings to the government (or other) entity resulting from the successful outcomes. 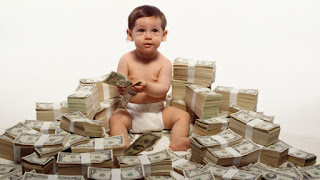 Pay for Success is the zippier nom de guerre of Social Impact Bonds. If you want my "for dummies" explanation, you can look here. If you want a grown-up's fully detailed explanation, complete with sad history, I recommend this piece by Tim Scott.

The basic idea is this. The government gets an investor to foot the bill for what's supposed to be a government program. Then if the task is completed successfully for less than the government had set aside to do the task, the government reimburses the investor for the program costs and as a bonus, the taxpayers' "savings" are magically transformed into the private investor's "earnings." It is this big time version of telling the babysitter, "Here's ten bucks to get supper. You can keep whatever change there is."

3) If it remains in place, it guarantees that somebody is going to get screwed. Go back to the baby sitter example. I learn that the babysitter has successfully (or at least acceptably) fed my children for seven bucks. Why would I continue to hand her ten? Once we have established the cost for which the job can be done, all future negotiations will be about how much profit for her I build into my suppertime financing. If a Social Bond program were ever to succeed well enough to last longer than a year, that would put the government in the position of deciding how many taxpayer dollars the contractors would be handed as profit, and either the taxpayers or contractor gets screwed.

4) It not only encourages, but actually requires metrics for success that are simple and simplistic and completely inadequate for measuring actual success in a complex system like education.

5) It adds a not-very-helpful extra layer of bureaucracy. The investor deals with the government, and the contractor of the service deals with the investor. This creates a nice layer of plausible deniability for the government when the programs violate any rules-- kind of like when famous celebrity Chatty Talksalot hires a McCorporation to make her branded clothing, and McCorporation in turn hires subcontractors in the Third World to run a sweatshop, and then Chatty can say, "What?! I had no idea!"

USED would like to graft this Pay for Success idea onto its terrible ideas about preschool, as captured in just one paragraph from their press release:

We should have a greater focus on evidenced-based practices, on measuring and improving outcomes for our youngest learners, and more incentives for promoting innovative approaches that promise to further improve child outcomes.

As we've seen, "evdience-based" is a meaningless weasel phrase. And as soon as we start talking about "measuring and improving outcomes" for four-year-olds, we are just plain full of it. Four years olds do not need to sit down and take a test so that their outcomes can be measured. They do not need to be run through academic based programs. They need to play. They need to explore. And they need to do it in an environment in which they are not required to demonstrate "outcomes" to officious adults.

Baloney. There is no "rigorous evidence of impact once positive outcomes have been achieved" with four year olds (probably not with sixteen year olds, either, but let's set that aside for another day). There is no evidence base to indicate that the USED has a clue what rigorous evidence of preschool success would look like, and of course for a PFS program, it would have to look like something simple and easy to measure.

So if we tell McCorporation "We'll give you a hundred bucks for every kid who scores better than 75% on this reading test," what do you suppose the preschool program is going to look like? Not like anything that a small child actually needs to experience. This is a terrible idea for taxpayers, small children, and their families. But it's an awesome idea for investors who want to hoover up some of those sweet, sweet education tax dollars.