After the two conventions, it began to look like public education would not have any champion in this Presidential cycle. So maybe now that the candidates have had a chance to put together clearer statements and assemble some advisors, has the picture changed? Are things looking up for fans of public education? 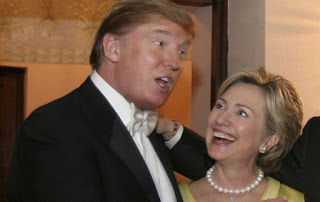 And in more than a single word...?

This was the week that Trump went to Cleveland to stand in one of Ohio's many failed charter experiments (well, unless your metric for success is "somebody made money from this") to deliver a speech that didn't impress much of anybody.

Well, okay. It impressed the Wall Street Journal, where editorial board member Mary Kissell gushed that no candidate had ever spoken out so strongly on school choice, and it impressed Jeanne Allen of the Center for Education Reform, whose desire to gut public education and replace it with profitable charter operations dovetails nicely with this week's version of Trump's education plan.


Trump's declaration about choice was a neat recycling of classic choicer points (civil rights issue, break up government monopoly, etc) and fits in well with his Watch The World Burn platform in general. But as Rick Hess (AEI) observed, "As I've repeatedly noted, there's no point in putting a lot of stock in his speeches and utterances. Trump says stuff. It's mostly performance art."

Trump's proposal is devoid of any meaningful details. He's going to get a pile of money from somewhere and make it available somehow for someone to let somebody have vouchers or choice or maybe charters. In fact, the very familiarity of his many points suggests that somebody has just googled school choice, then cut and paste some popular arguments, without making any attempt to understand what any of it means. (And some of that was cut and pasted directly from Jeb Bush, whose blood pressure must be epic at this point)

The only part of Trump's education policy that matters is his choice for secretary of education, because that person is the one who's going to set policy-- and that will in turn depend on how much spine Congress develops. The only thing to really take away from Trump's gumflappery is that he is not remotely a supporter of public education and would gladly do away with it, and we already pretty much knew that. So congratulations charter and choice fans-- Trump is your guy! Yay?

Clinton Sets Up Her Table

Meanwhile, Hillary Clinton's collection of education advisers saw the light of day, courtesy of Mother Jones.
So Eskelsen-Garcia and Weingarten got that seat at the table, or at least at A table, that their stage-managed early endorsement of Clinton was supposed to get them. Yay?

People who are excited (or sad) about this may want to remember that the national unions have often looked pretty reformy themselves, from their love of Common Core to their reluctance to say Mean Things about Arne Duncan or his boss.

Nor is the rest of the line-up encouraging. We've got two CAP veterans here, and the Center for American Progress has been a huge fan of reformy baloney. Carmel Martin in particular has most recently served as the point person for #TeachStrong, the coalition of reformy groups that was nominally about uplifting the profession but always looked more like the incubator for Clinton ed policy.

It's worth noting that writer Kristina Rizga gets one thing wrong-- the Democratic party does not divide into pro-reform vs. pro-teacher union. In particular, a person's pro- or anti-union stance doesn't really predict where they are on support for public education.

So where do we stand?

Where we stood before. If you want to vote for Clinton because you don't want to watch the world burn, that's fine. Just don't imagine that public education is going to have a friend in the White House.

If public education is your issue, pay attention to the other races. All the other races, because as we keep learning, reformsters are busily pumping money into a wide assortment of local contests. The Waltons have dumped a couple million into Massachusetts just to lift the charter cap. The judge who dared to point out that Washington State's charter law was unconstitutional is in the election fight of her life (contribute here). Reformsters are trying to pack every elected body from state legislatures to local school boards.

So don't get distracted by the shiny blather of the national contest. It's the less glamorous contests that will make significant differences on the local level. Reformsters understand that really well; the rest of us need to grasp it as well.

Finally, understand that come January 2017, the same debates and battles will continue. The elections may change the nature and focus of these debates, but we already know, right now, that after this election is over, the struggle to preserve, protect, and deliver on the promise of public education will continue. So let's get ourselves prepared for that as well.

This is a marathon, not a sprint, and the Presidential election is just another small hill along the way. Let's just keep moving.