I get emails, often from folks who are thrusting their PR releases blindly into the blogosphere. Somebody or something told them I'm an education blogger, and so they add me to a mailing list, and mostly I don't pay attention. But the subject line that appears above caught my attention, and so I read my email from Shelly Smith, PR Manager for Proximity Learning, Inc., and consequently got to learn about one more way people are trying to make a buck or ten in the edu-biz. 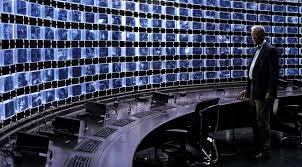 Proximity Learning might be one of the more ironic names out there, because what they actually deal in is what we used to call distance learning. I'll tell you more about how they work in a moment, but first, let me introduce you to the guys who came up with this outfit.

Andrew Polito is co-founder, COO and Vice President of the company. He has an edu-pedigree as the son of famed Tuscon edu-gadfly Sam Polito. He has a background running IT for a district, teaching ESL oversees, and generally getting involved in China Stuff. His undergrad work was in liberal arts and East Asian Studies.

Polito's co-founder is PLI CEO is Evan Erdberg. Erdberg is listed as a co-founder, but his LinkedIn account shows him as CEO since 2014, though the company says it was founded in 2008. Anyway, before PLI, , Erdberg worked in sales for Teachscape, a company specializing in "human resource management" that I once described as a place where the manufactured crisis in education meets the opportunity to make money from it. He also spent six years with Knowledge Delivery Systems, where one of his accomplishments was developing "a strategy to enter three new market verticals with our existing products that increased revenue by 25% and expenses by only 5%." Prior to that-- marketing, marketing and more marketing. His education-- a BA in Marketing and Management (Franklin and Marshall) and an MBA in Organizational Leadership (University of Edinburgh).

In the whole management team, there are two managers (Human Resources and Teacher Effectiveness) with actual teaching in their background. The three lead teachers include one elementary teacher and two whose background is in teaching Chinese.

That fits the PLI origin story, which says that PLI was founded (as TCG Global) in 2008 to meet the new crisis in world language instruction. Since then, they have expanded their offerings. But their basic format remains the same-- using the internet for virtual teaching.

See, everyone used to be short Chinese teachers and American Sign Language teachers, but nowadays, everyone is short all kinds of teachers, and the folks at PLI smell opportunity. Via e-mail, here's how Erdberg explained it to me:

Each student has access to a computing device such as a Chromebook, Laptop, Ipad, Tablet, etc. When they come into class they log in to our online software and they actually see our teacher.  Our teacher will then also see them through the webcams on there computing device.  Our teacher will then lead class in the same way a teacher physically there would.  In every classroom there in a sub/facilitator/parent etc. that assists with classroom management.  Our teacher also adopts the schools curriculum, using there books and lesson plans, there grading policy, and we set up the classes to the bell schedule of each school we work in.  Students can raise there hand during class to ask questions, be called up to the "whiteboard" by the teacher to show work, etc.  All assignments are done online in our Learning Management system along with grading etc.  We are effectively able to find and hire fantastic teachers and deliver them to students that would otherwise have a substitute or an unqualified teacher.


Erdberg was happy to answer other questions as well. School districts hire PLI on a per-class basis, with an allowance of up to thirty seats per class. And when I asked him about costs to the district, he told me

The cost to hire one of our teachers is about 25% lower than hiring a full time teacher since they are not paying healthcare, pension costs, taxes, union negotiated wages, 401k, etc. They only pay a set fee to us.

I wondered exactly who PLI would hire to teach-- after all, working teachers are, well, working when these courses need to be presented. Erdberg says they hire a large number of teachers on maternity leave as well as recent retirees-- folks who want to stay in the game, but prefer working part-time and/or from home.

I imagine the technical issues are legion. I wonder how extensive a lab there would be in the PLI teacher's kitchen, and the production values and camera work have to be an issue as well. In the example video above I was dying to have control over camera position, because the chosen angle made it challenging to see what the teacher was trying to show. And PLI teachers are supposed to adopt the hiring school's curriculum, but if the school doesn't have someone teaching that course (hence the need to hire PLI) I have to wonder just how useful the curriculum is.

I can see the value of PLI's original mission, perhaps because I work in precisely the kind of school district that could never offer something like courses in Chinese unless it was through this kind of distance learning arrangement.

But I am reminded of the mission creep of Teach for America, an enterprise that started out with the noble mission of filling empty teaching positions but eventually, flush with Big Money and Important Friends, became a way to replace and supplant actual existing teachers.

PLI is currently in California, Virginia, Kentucky, New Jersey and Texas (they are based in Austin); here's the list that Smith sent me of participating districts (here's a newspaper story about the Greenville, MS district)


Are these districts that have all been forced to "innovate" in the face of a teacher shortage, or are we working on innovative ways to avoid actually hiring full-time, benefit-receiving, pension-funding teachers? Does this help solve the "teacher shortage," or does it make it less necessary to even think about it? The usual reformy players are not in evidence with PLI (it may involve too many actual trained teachers for their tastes), but I'm always a little leery of any chance for folks to say, "Hey, look! We don't actually have to hire real teachers any more!" Of course, distance learning has been around for a while, offering some real benefits but failing to gain traction. And I have my doubts about the technology's ability to interest or engage digital natives. But this is a thing that is now out there in the world. Watch for a virtual teacher coming to the classroom next door. A little less human, but at least more cheap.


Posted by Peter Greene at Wednesday, September 07, 2016
Email ThisBlogThis!Share to TwitterShare to FacebookShare to Pinterest