The Most Troubling Lie

Sure, we know that Trump has a tendency to tell whoppers, stretch the facts, and just make shit up. But his insistence yesterday that his inauguration crowd was not smaller than Obama's 2009 inauguration crowd-- well, this one I find extra troubling. Here's why. 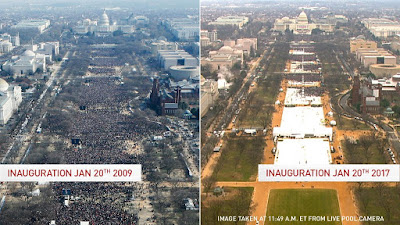 It's so transparent. It's not like you can look at the photos, squint, and say, yeah, I can see how if you're really a fan of Trump, you would interpret his crowd as larger. This lie is literally "Who are you going to believe. Me, or your own eyes?" The "they were slowed down by the security" lasted five minutes until the Secret Service said, "No, we weren't doing that."

It's pointless. Sure, our leaders often lie to us, but generally it's in the service of some policy goal, because politicians often succumb to "the end justifies the means" logic. So they do things like tell us lies to get us to go to war. It sucks, it's reprehensible, and it's indefensible-- but it's at least comprehensible from the standpoint of politicians trying to achieve their policy goals. This lie accomplishes absolutely nothing. It doesn't sell us a policy idea. It doesn't achieve a larger goal. It just preserves the delicate ego of our new president. Well, a takes a blunt swing at press credibility.

It enlisted the powers of the federal government. It wasn't enough for Trump to just, say, tweet his claim at 3 am. The White House Press Secretary, in his official capacity at an official press conference, was sent out to tell this lie to the press. The National Parks Service had their twitter accounts taken away for contradicting the lie.

[Update: It's an assault on reality. As stories have trickled out and responses have trickled in this morning, it becomes clear there is another troubling aspect here. We should not trust the photos or the news accounts or, well, anything-- we should simply trust the words of our Beloved Leader and forsake all other methods of perceiving reality. Everything is, at a minimum, open to debate and discussion and there is no objective reality except that presented to us by the Beloved Leader.]

As a teacher, I am left wondering exactly how I handle this with students. In a journalism class, how do we interpret the new role of journalists, who must now be attacked and criticized by the President of the United States for daring to print facts. Do we have to re-write the old rules of research, which generally told students that a .gov domain name was trustworthy and fair game for a research source.

What are we to make of a President who tells pointless bald-faced lies and uses the federal government to spread them, and then to attack and further damage the conduit of free press through which we are supposed to get our information? How do we navigate a world like this, and how do we teach our students to do so?
Posted by Peter Greene at Sunday, January 22, 2017