Elizabeth Warren has noticed that there will be only one, brief opportunity to grill Secretary of Education nominee Betsy DeVos, and so today she has sent DeVos a letter outlining what sorts of answers she's looking for. The whole thing is sixteen pages long, and while Warren has not always been on the right side of education debates (in particular, she believes in the Big Standardized Test), she pulls no punches here, asking many of the questions that many of us want to see asked. You can read the whole 16-page missive here, but I'll hit the highights for you. 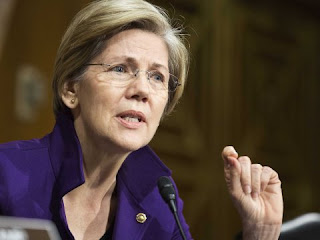 On the very first page, after outlining the reason for the letter, Warren outlines the situation with appropriate bluntness:

Warren notes that a review of DeVos's record shows that she has "largely advanced your policy agenda through others" mainly through money. Warren quotes DeVos's now-infamous line about expecting a return on her investment.


You are, of course, free to spend your fortune however you choose, but making large political contributions to 'buy influence' does not qualify you to help set policy for the education of America's school children.

Warren wraps up the executive summary by noting DeVos's "non-existent" record on higher ed, and then gets down to the specifics.

While there is an extensive record of your millions of dollars in political spending to support privatizing elementary and secondary schools and sending public education funds to private and religious schools through voucher schemes, there is little evidence that there efforts have improved public education or have helped students learn and achieve.

Warren lays out (this whole letter includes footnotes) the DeVos record on pumping vouchers, then notes that the evidence on vouchers is "mixed at best." Warren also notes the role of vouchers in the history of segregation. Warren says she is "extremely concerned" about DeVos's "staunch support" for a system that will "siphon away much-needed public education funds" in a manner that allows voucher schools to sidestep standards and discrimnate.

Warren's K-12 questions include asking if DeVos will support only policies with rigorous basis in peer-reviewed evidence, would DeVos use her position to promote voucher systems-- including honoring the ESSA provision that prohibits the USED from meddling in such things. Will DeVos oppose any voucher program that results in a cut for public school funding? And how will she make sure that such programs don't further segregate schools?

Opposition to Accountability in K-12 Education

Warren lays out the long, sad history of DeVos's battle against charter accountability in Michigan, and the mess it has helped feed. She underlines both educational accountability in the broad sense and also as it applies to making sure that schools are "not shortchanging students of color, low-income students, English learners, students with disabilities, and other historically marginalized groups of students."

So Warren's line of questioning is simple-- will DeVos follow the law, and support the parts of ESSA that call for accountability. Will she ensure that schools, including for-profit charters, do not discriminate> Will she vigorously enforce the financial accountability pieces of ESSA? Will she demand that states make extra resources available to poorer schools, and will she punish states that don't?

Warren is "particularly concerned" about the DeVos "paper thin" record on higher ed. USED has a big stick to swing about higher ed, particularly in the management of a gigantic mountain of loan and grant money. Warren doesn't waste time indicting previous administrations-- she just notes there's a huge mess with the whole loan business, and she notes that she and Trump actually agree that "the federal government should not be making a profit off the backs of students trying to get an education."

The department has a trillion-dollar loan portfolio to manage, and Wall Street is salivating at the thought of buying up that debt so that they can soak those students debtors, a large portion of whom are in a real mess. Again, Warren gets into some details about the situation, throwing in stats and names. This is an issue she knows well, and about which DeVos has virtually never said a word.

So Warren asks if DeVos agrees with Warren and Trump on that backs of students thing. Does DeVos know of any "statutory authority" to re-privatize all that student loan? Will DeVos support metrics and measures to fins the bad actors in the student loan biz, and make them act a little less bad? Basically, Warren wants to know if DeVos will have student loan borrowers' collective backs, or will she side with the various sharks (including the federal government) that want to treat students as so much delicious chum.

Oversight of Public, Non-Profit, and For-Profit Colleges and Universities

Warren notes that in exchange for the gazillions of dollars of money that the feds pump, via students, into the higher ed system, the feds have a responsibility to make sure "that students receive the education they were promised and that taxpayer dollars are not wasted on loans to students who attend bogus schools (like, say, Trump University). She notes the abysmal mess that was Corinthian Colleges, generously gives the feds credit for trying to do better at protecting students and taxpayers.

Warren notes that DeVos has never said boo about higher ed policy, but "the very policies you have spend decades advocating for in elementary and secondary education-- more free taxpayer money for private and for-profit education operators with virtually no strings attached-- are the exact policies that have caused so many problems and harmed so many students in higher education." I have some problems with the outgoing administration's policies for higher ed accountability, but Warren is dead-on with this point-- what DeVos wants for K-12 has had disastrous results in higher education.

Warren has a long list of questions here, and they boil down to "In the ongoing struggle between debt-ridden students and predatory and even fraudulent colleges and universities, whose side will you be on? Whose interests are you going to preserve?" Warren's un-boiled-down questions are pointed, sharp and specific, with no room for wiggling.

America's students and their families need a Secretary of Education who will support public education, hold states and schools accountable for providig quality programs, protect the civil rights of all students, and meaningfully address the student debt and college affordability crisis. The next Secretary of Education must support adequate and equitable federal funding for public education, hold accountable all schools that receive taxpayer dollars-- from charter schools to for-profit colleges-- and ensure that they are delivering a world-class education for our students. These are the qualities I will be looking for in the next Secretary of Education, and I look forward to hearing from you and receiving your answers to my questions during your confirmation hearing.

There are things that I wish Warren understood, including the massive problems created in the hapless quest for federal accountability measures of local schools. But her proposed grilling of DeVos (and her low-nonsense assessment of DeVos's history and proclivities) looks good to me. It will be interesting to see how this goes-- Warren's questions are direct, clear, and specific, with little or no room for vague wobbly generalities. I don't expect a lot of good news to come out of these hearings, but a plain-language face-off between Warren and DeVos could at least provide some entertainment, and require DeVos to give some clear answers.


Posted by Peter Greene at Monday, January 09, 2017
Email ThisBlogThis!Share to TwitterShare to FacebookShare to Pinterest