Supremes May Decide How Much Education Is Enough

The case of Endrew F. vs. Douglas County School District has finally wended its way to the Supreme Court, and it could have some serious implications for school districts across the country.

Endrew F. is a studentwith autism and attention deficit/hyperactivity disorder (ADHD). With the help of an IEP, he attended pre-K through 4th grade in Douglas County Schools out in Colorado (if that sounds familiar, it's because they have been ground zero for some reformy shenanigans, as chronicled in the film Education, Inc.-- but that's unrelated to our story today other than it takes a real bunch of stubborn leaders to get a school district dragged into the highest court in the land like this). Going into fifth grade, Endrew's parents deemed his IEP Not Good Enough, and they placed him in a private school. 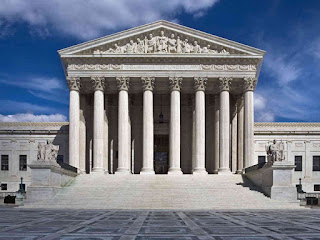 Now, the Individuals with Disabilities Act (IDEA-- no, I've never known where the damn E comes from--Correction-- it stands for Education, a word often dropped from some namings, which I should have known) says that if a district can't handle the education of a student with special needs, they have to foot the bill to send the student to some school that can deal. The child has to receive a "free appropriate public education."

The F's, however, apparently chose a Lexus for the child when the district only wanted to pay for a Kia, or maybe a Chevy Cruze. And it is over that business of exactly who is going to pay how much of which bill for Endrew's education that puts the matter in court.

This has, as you might imagine, come up before, and various lower courts have applied a some standards that are both inconsistent and vague. For instance, a couple of years ago, courts in Michigan declared that the state didn't have to get students an education-- just spend money on something called education, whether it worked or not. Here Joseph R. Smith explains the central issue of Endrew in a Denver Post op-ed:

Endrew's private school reportedly helped him across the board with learning both how to do math and how to manage himself for better socialization. Douglas County Schools said, "That was all luxury gravy. He was getting de minimis here, so no extra help was necessary." "De minimis" is of course Latin for "the least we can get away with" (e.g. my students would like to know de minimis number of pages required for their paper). As long as Endrew was making any gains at all, no matter how unspeakably tiny, Douglas argues they were meeting their obligation under the law and any additional gains that Endrew or his parents aspired to are a luxury for which the taxpayers of Douglass should not have to foot the bill.

So now we have a court case that will decide what "the least we can get away with" means for schools charged with providing education for students with special needs. And the Supremes are going to hear it.

The case has attracted some attention. Check out the list of "amici curiae" briefs (Latin for "I think this case might end up affecting me or my clients, so I'd like the chance to shoot off my mouth too, just in case the court decides to make its decision based on a semi-public vote") and you can see how many folks are concerned. The National Association of State Directors of Special Education. Former USED Officials. Advocates for Children of New York. Coalition of Texans with Disabilities. Delaware. The NEA. National Center for Special Education in Charter Schools. Many, many people have opinions about this case.

The case made its way to the Tenth Circuit Court of Appeals, where the court found that Douglas County's idea of the bare minimum was appropriate. (You can find a more thorough and legally run-down here.) The F's swung for the fences and appealed to the Supremes in December of 2015 (I don't know who the F's are, but they clearly have some rich and/or connected friends). After a few delays, it looks like the court might hear arguments on January 11, 2017 (presumably before Herr Trump can install Brittney Spears or David Duke as the ninth justice).

It will be interesting to see how this lands. On the one hand, school districts don't want to have to shell out boatloads of money for fancy frills for students with special needs. On the other hand, when school districts are defining "actual education" as fancy frills, we have a problem. As Smith notes, this is a case that can unite leftie and righties behind the same outcome even if for different reasons-- lefties want to see the education rights of the most vulnerable students protected, and righties want to see parental options protected.

Arguably any decision will let a whole lot of school districts know what, exactly, the law expects of them (at least until our Blessed Leaders decide to "improve" it. Remember that our outgoing administration believed that de minimus was basically to take students with special needs and just, you know, expect real hard.

No matter what side you're on, we're looking at the prospect of the Supreme Court, such as it is at the moment, making a decision about just how much education students with special needs are entitled to-- and from there, it's just a short hop to ruling how much education any student is entitled to. And that is a prospect about which I am exceedingly unexcited, though I suppose, since the Executive and Legislative branches have both tried to micro-manage US education-- why shouldn't the Judicial branch take a shot at it. It's de minimis they can do.
Posted by Peter Greene at Wednesday, January 04, 2017