IN: Teacher Sit-in For DeVos Senator

Todd Young was born in 1972 in Lancaster, PA. Today (Thursday) he's an Indiana senator with an office full of grumpy teachers.

In the meantime, he also worked for the Heritage Foundation, worked for Senator Richard Lugar, and volunteered for Mitch Daniels gubernatorial campaign. He got the bug. 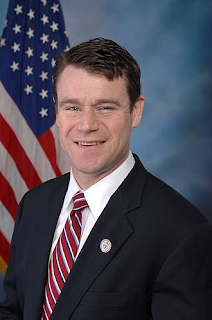 In 2010 he ran as a Republican for Indiana's 9th District with endorsements from luminaries all the way up to Dan Quayle. He defeated an incumbent. He had what was called a mixed record. In 2016, he decided to step up to a Senate seat. He won the GOP primary and trounced Evan Bayh in the general election to take Quayle's former seat (he's also married to Quayle's niece).

This "Marine unafraid to stand for conservative principles" had some help getting elected. The fight with Bayh drew a grand total of $38 million total in "outside money", with $24.3 million of that going to Young.

Young now sits on the Senate HELP committee, the one deciding the fate of Education Secretary-in-waiting Betsy DeVos. Want to guess who helped swell the Young coffers just last year?

Which brings us to today. Teachers have noticed that DeVos gave at least $48,000 to Young last year. Granted, that was a small drop in a $24 million bucket. Of course, it's also a year's salary for lots of teachers. Those teachers have demanded that Young recuse himself, and today they were driving the point home by staging a sit-in in his office.

Young's staff has pointed out that this sort of greasy-palmed cross-pollination of political backer and cabinet hopeful has occurred before, citing Senator Joe Donnelly's receipt of a contribution from Commerce Secretary hopeful Penny Pritzer. On the other hand, Pritzer's contribution was $5,000 in 2013 dollars, and she was a relatively non-controversial candidate who was approved 97-1.

Young's not going to recuse himself, and he's not going to vote against DeVos, either. But the sit-in today is a reminder to Indiana and the nation about how business is conducted these days. My hat is off to those Indiana teachers who made the gesture to help bring attention to just how this process is working.