One of the best things the feds ever created was the nutritional information panel for food.

When I go shopping, I can quickly and easily access information about the food I buy. There's how much fat in these power bars??!! Look-- twinkies have far fewer calories than I imagined!

The panels are a model of transparency, because the information is there for me to do with as I will. Years ago I didn't care at all about dietary fiber; nowadays, it's something I can stand to pay attention to. Protein was never a big deal, but since my wife is currently constructing a pair of twins, we pay attention to how much protein there is in the food we bring home. And we can shift our attention as new information becomes available-- different types of fat or cholesterol used to be non-issues, but now informed consumers know there are distinctions that matter. 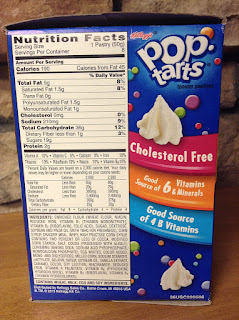 Think of how much better this system works than one in which food was rated or ranked. If the feds slapped on labels that said "These bagels get a B+" or "These frozen waffles are the 215th-ranked food in this grocery store." I would have virtually no information on which to base my judgment, with the whole complex issue of the many characteristics of food and how it balances against what I need and want in my diet-- that would all be reduced to a piece of data so narrow and limited and opaque as to be meaningless, useless for me in making a decision.

This is how I know that many reformsters who advocate for school grades and rankings "so that parents can make an informed choice" are lying-- they are neither supporting parents nor choice.

To support a grade or ranking, rather than a simple transparent data system like the nutritional information labels, you would have to believe one of the following

1) Parents aren't capable of understanding and processing the information, so we'll have to process it and evaluate it for them.

2) Parents will make the "wrong" choice, so we must stack and sum up the data in a way that pushes parents toward the choices that we want them to choose. We must decide what decision they should make.

3) It has nothing to do with the parents. We want a basis on which to attack and close certain schools, and that's what the ranks and grades are for.

If the food system worked like this, government bureaucrats could rate Pop Tarts an A because they have bright colors and lots of sugar, or C because they don't have very much actual fruit or F because  the bureaucratic system is operated by people who have stock in the Toaster Strudle corporation.

Choice advocates love to talk about letting parents vote with their feet, but in fact rating and ranking are all about making sure that the Powers That Be get to pick the winners and losers. It's about creating the illusion of choice without the real, complete, transparent information to make a real choice. It's no coincidence that A-F systems are particularly popular in states where policy leaders are intent on dismantling public ed and replacing it with a profitable charter system.

One of the biggest problems with school choice in this country is that choice fans are, for the most part, not really trying to create a choice system. If they were, we would be collecting all sorts of data about schools and putting it out there for parents to decide, based on whatever criteria they think is important, like a giant nutritional content label. But that's not what we're doing-- choice advocates are keeping the definition of "good" and "bad" schools gripped tightly and secretly in their own hands, making sure that they retain the right to pick winners and losers (and there is no free-floating information that might contradict charter/choice school marketing).

There are many reasons that a public school advocate would oppose charter and choice systems, but one of the reasons I oppose the particular system that we are seeing implemented from Michigan to Florida is that it's dishonest, it's a lie. It's not really a parental choice system at all, and we can tell that from the label, which is designed in a rating or ranking system, to keep all choice out of the hands of parents and in the hands of the people who run the system.