When Diane Douglas ran for the post of Chief Education Honcho of Arizona, she ran and won on a basic platform-- kill the Common Core. As it turns out, that was kind of a lie.

Arizona, under Tea Party fave and former Cold Stone Creamery CEO Governor Ducey, set out to replace those dirty rotten Common Core standards. Now, after two years, the new standards have been adopted, confirming what many observers have been claiming all along-- this is the same old pig with lipstick and a nice wig. 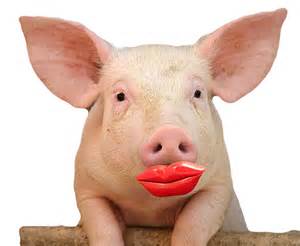 Common Core foes in Arizona have been to this rodeo before-- previous Gov. Jan Brewer and former ed boss John Huppenthal had renamed the pig without changing much of anything. Angry conservative Core opponents backed Douglas to get the job really done. And they are now plenty pissed, because the job has been done, and it has been done to them.

"Oh, those whiny conservative anti-Core moms," you are saying. "Are they just complaining over nothing? Have they taken some uninformed clown's word for it that the standards haven't changed at all?" Well, thanks to the magic of the interwebs, we can see for ourselves. The Arizona standards draft is right here, and the CCSS are still camped out at their usual interhome. So you can play this game on your own, if you'd like. Let me just share a few examples gleaned by looking at the Anchor Standards from each. I am going to stick to the ELA stuff because that's my field of expertise. Let's look.

The CCSS anchor standards for reading come under four sub-headings. Those sub-headings are:

The sub-headings for the Arizona ELA standards are:

In both sets of standards, the reading portion is broken into ten anchor standards. In CCSS, standard R.4, the first under Craft and Structure, says:

Interpret words and phrases as they are used in a text, including determining technical, connotative, and figurative meanings, and analyze how specific word choices shape meaning or tone.

In the Arizona standards, the first standard under Craft and Structure is R.4, which says:

Interpret words and phrases as they are used in a text, including determining technical, connotative, and figurative meanings, and analyze how specific word choices shape meaning or tone.

There's a lot of this, although-- hey, standard R.1 is different in each set. The CCSS R.1 says;

Read closely to determine what the text says explicitly and to make logical inferences from it; cite specific textual evidence when writing or speaking to support conclusions drawn from the text.

Read closely to determine what the text says explicitly and to make logical inferences from it.

So, you know. Totally different. So maybe the differences were incorporated where the anchor standards are broken down to grade-specific standards. Let me check the grade I teach (11th) and see--oh, look. Arizona also has 11-12 grade standards combined. So anyway, standard RL.11-12.1 says

Cite strong and thorough textual evidence to support analysis of what the text says explicitly as well as inferences drawn from the text, including determining where the text leaves matters uncertain.

But in the other set of standards it says:

Cite strong and thorough textual evidence to support analysis of what the text says explicitly as well as inferences drawn from the text, including determining where the text leaves matters uncertain.

Did I forget to say which is which? It doesn't matter. And we could play this game all day.

There is a red-line version of the standards that highlights exactly what was changed and, man, they must just be hoping that nobody who opposes the Core would bother to read this. Changes include things like changing "closely" to "carefully" (so that people don't get the idea we're pushing "close reading") or taking a two-part substandard and repunctuating it to be two separate substandards.

Dr. Stotsky offered a comment about how context clues are always listed as the first strategy for figuring out the meaning of an unfamiliar word, so they've moved it to last on the list instead of first. Dr. Abercrombie noted that asking second graders to make connections between "a series of historical events, scientific ideas or concepts, or steps in a technical procedure" might be developmentally inappropriate, so the new standards add the phrase "with prompting and support."

Arizona also fiddle-farted around with the glossary of terms, again doing little of consequence other than a fairly large wrangling of "text complexity," based largely on the feedback of Dr. Stotsky, Elizabeth Pope, and Achieve (yes, the Common Core BFFs of Achieve were in on this party). There's a great deal more clarification about text complexity and how to determine it. That qualifies as an actual change. Oh-- and they added the beloved schwa was added to the list of vowel phonemes.

Just looking at the standards makes it clear that this is the laziest snow job ever attempted, and that when Douglas says things like the new standards "reflect the thoughts and recommendations of thousands of Arizona citizens" or claims they were "reviewed by several nationally recognized technical experts including prominent anti-common-core authorities" she is really close to flat out bald-faced lying.

Okay-- the new standards do include standards for cursive writing, which is not a Common Core thing. And it's possible that the math standards are-- no, actually I just looked, and while math is not my field, I can tell when two strings of words are, in fact, the same (they covered that in English teacher school) and there seems to be an awful lot of that going on. There isn't much red in these redline versions either.

Clearly by no stretch of the imagination did Arizona build its own set of standards from the ground up. This is the same old pig with a different shade of lipstick. If Douglas is planning to run for re-election on the slogan, "She Got Us Out of Common Core," she might want to rethink her plan. The only possible argument in favor of this non-rewrite is that it certainly won't be very disruptive-- districts won't need to replace textbooks and teachers won't have to rewrite lesson plans and all can go on as before. just without speaking the dreaded words "Common Core."
Posted by Peter Greene at Sunday, January 15, 2017
Email ThisBlogThis!Share to TwitterShare to FacebookShare to Pinterest