Today The Daily Telegraph, in its Questor business section, warned investors to stay away from Pearson stock.

Writer James Ashton notes that one need not "monitor Donald Trump’s late-night Twitter feed" to get some sense of his opinion about education, specifically that Herr Trump does not think that education needs a giant injection of money. And that's not good news for the publishing behemoth (not like the announcement of No Child Left Behind, which Ashton, in one of my favorite British journalism lines ever, says had then-head of Pearson Dame Marjorie Scardino "coak-a-hoop").

Pearson depends on the US for 63% of its sales, and that slipped by 9% in the first nine months of 2016. Ashton attributes Pearson's problems to several factors.

An education boom (is that what it looks like we're having from over there!?) generally goes with a downturn in education spending.

And despite Michael Barber's thoughts about the digital ocean and the many plans he has for draining, bottling and selling that ocean, Ashton had this pointed observation:

For all talk of digital enlightenment, Pearson is still in the dead trees business, with print accounting for about a third of its activities.

Analysts think that the book-buying business is giving way, particularly on college campuses, to the book-renting business (if you want to get a sense of what's happening, just run a search on "renting college textbooks"-- there's a bunch of folks making a mint not selling books).

Analysts like Morgan Stanley are calling on Pearson to cut costs, and they've been going at it, with the ironic result that some holdings they dumped (like Financial Times) are actually doing better now. But Pearson Honcho John Fallon must still "tighten the portfolio."

Pearson stock has been hovering around 9-ish for months now, having plummeted back in October of 2015 over a call that education earnings would not produce nearly as well as originally expected. Pearson's stock took a 16% dive then, rebounded just a bit, and then bumped down some more in October of 2016. 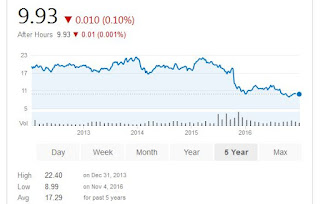 Here's a snapshot from right now. You can check your local ticker to dig out the details.

Bottom line: Questor says avoid. Pearson has some issues, and analysts don't see it bouncing back any time soon.
Posted by Peter Greene at Saturday, January 14, 2017