I have a theory that one of the major problems in America today is just plain bad management. I have watched it trash companies on the smaller, more local scale here, and periodically we get to watch large American corporations go down in flames.

For instance, consider retail giant Sears. Business Insider has published a blistering look inside the ongoing death spiral of the venerable retail giant. Hayley Peterson's reporting is thorough, brutal, and depressing, and it provides a striking look at how bad management can sink a business because in the case of Sears, the problems are neither complicated nor complex-- one terrible CEO is managing to torch the entire place. 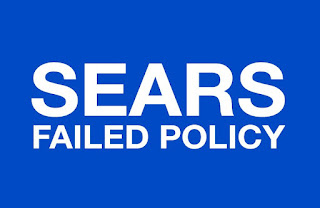 CEO Eddie Lambert is the very model of a modern major management disaster. He has no background in retail, and yet, somehow, he is running a giant retail corporation. What's his actual background? Running hedge funds. Making money from investments. This is one of the precepts of modern management-- anybody can manage any business as long as they have previously managed some other business. And if they have previous experience shuffling investment money, then so much the better.

Lambert has tried a variety of stupid bad management ideas. In 2013, Business Insider took a look at his bright idea to split the company into divisions and pit them against each other, because (as you may have heard) competition fosters excellence. It didn't. It fostered a huge lack of cooperation that in turn led to decisions that were bad for the enterprise as a whole. (You can read more about this special kind of management stupid in action here at Bruce Baker's blog post at the time).

Lambert tries to manage at a great distance, by screen. This is also a bit of modern management brilliance-- keep yourself in an insulated bubble far away from the people you manage, because if you get close and get involved and have to look them in the eye, your human considerations might get in the way of your business calculations.

Lambert is a mean, screaming, punishing SOB. As painted by Peterson, he is a manager who demands that his subordinates tell him what he wants to hear and do not disturb him with information that contradicts his "vision" for the enterprise. Like many of these guys, he believes that he is a visionary and that nothing must be allowed to distract from his vision.

Lambert is wrong. Virtually every one of his genius ideas has failed to improve Sears' situation. That includes selling off valuable parts of the company to get a few bucks now to keep things afloat. But every one of his ideas has wrought more destruction than growth. And because he doesn't know a damn thing about retail, his ideas fail to address the most basic central mission (get customers to come into stores, and then sell them stuff they want), his ideas are useless, even destructive as they sap energy and attention from the main thing.

Lambert has covered his own ass. Peterson explains how Lambert has created a web of funds and loans and investments that insure, no matter what happens to Sears (and all the people who work there), Eddie :Lambert will be fully insulated and not hurting financially. Not hurting at all. "He's moving money from one pocket to the other pocket, and he's protected himself on both sides," said one of the many, many former executives from Sears.

I follow stories like this almost as often as I follow education stories, and the same question always comes to mind-- is THIS what reformsters mean when they insist that schools be run like a business? Because if we are going to talk about running schools like a business, perhaps we should get a bit more specific, because an astonishing, frightening number of American businesses are actually run pretty badly.

I've said for decades that education is where bad management ideas go to die, but the really unfortunate thing is that some of the worst ideas shambling about the management landscape like clumsy, destructive beasts-- some of these cause huge amounts of damage before they can finally collapse. I don't even want to think about happens when they take root in the White House. We must at least continue to do our best to keep them from making a mess out of our schools.
Posted by Peter Greene at Wednesday, January 11, 2017