The signs are everywhere. Herr trump says he doesn't need to divest business interest or release taxes because the public doesn't care and isn't interested, and the counter-argument is to cite statistics that yes, the public does care.That's swell-- but isn't the point that we have rules and laws and even Presidents are supposed to follow them?

Our discourse about ourselves as a country has come unmoored, detached from any side of dock or shore or anchor; we're blown about by the winds of personal impulse, tied to nothing but our similarly unmoored tribes. 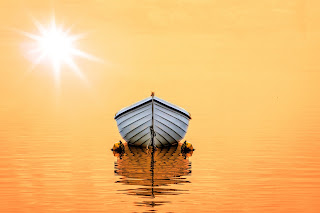 The continuing Russian hacking-blackmail-influence dustup finally broke my brain. If you are anti-Russian, but pro-CIA and do believe that the hack actually happened, that means you belong to... which tribe, again? Can you guess which tribe would be saying things like "You can't trust the agencies that told us about WMDs" or "We should embrace friendship with Russia" or "It's unpatriotic to dis the FBI"? I'm not sure I can anymore, and many people have lost their bearings trying to keep up-- and that's before we even get to the business of sorting out which facts your side believes are facts today.

That's because most sides of the argument (and I'm not even sure how many there are any more) have stopped trying to understand what is actually happening and, as with most hot topics in the US today, have dug in on whatever side they are on. There are no rules, no guiding principles, no ties to anything except whatever the people running your particular movement have decided is your position.

This is (one of) my problems with Movements-- too often things descend into an argument about which people are pure enough, right enough, aligned enough, to deserve our loyalty or fealty. The Reformsters have had their ongoing sturm and drang about maintaining the coalition between left and right. On the public school side, there are frequent arguments about whether or not certain figures desrve the respect they have, or should be cast out into the darkness because they haven't taken the right position on A or X.

I have never understood these arguments, these quests for purity. First of all, you know who sees the world exactly the same way I do? Nobody. Second, you know who in this world I give my unquestioning fealty and allegiance, whose word I will absolutely accept and follow, no questions asked? Nobody. You know who I expect to follow me without question and agree with whatever I have to say without debate? Also nobody. You see the pattern.

Let me talk about some things I believe.

You cannot use other human beings as your moral compass. That includes yourself. Your moral compass comes from your principles, your values, your beliefs, your understanding, your vantage point, your empathy and apprehension and comprehension, and all of these things must be tuned and retuned and examined on a daily basis. You make your decisions based on your principles, your compass, and not on how you feel about other people who are arguing for A or B or Q or X.

I blame my generation (okay, it's possible that this business goes all the way back to Thoreau, but I'll stick to proximate causes). As long as we've been able to shoot off our mouths, we Boomers have been guided by the idea that you must Do The Right Thing even if it means breaking the rules, and we  meant to be guided by principle, but we too often slid into believing that if we were good and righteous people, well, then, whatever we wanted to do must be okay. I've always been struck how Bill Clinton and Junior Bush both operated without shame, even when caught misbehaving, certain that they were good and righteous people and therefor they couldn't be screwing up. No Nixonian hiding behind the Office ("If the President does it, it's not illegal").

This has become Normal. watch any tv show from NCIS to Grey's Anatomy and watch people in positions of power and authority just shred rules like tissue paper. I've always maintained that Americans were largely unalarmed by finding out that the government collected and sifted through phone records because they watch it done all the time on shows like NCIS-- but, you know, it's good guys violating your rights, so it's okay.

This self-guided dismissal of the rules (I don't need to follow the rules as long as I follow my conscience") has, ironically, led to an explosion of rules. Because, personally, I don't need a lot of rules because i am guided by my conscience-- but Those People over there? I'm pretty sure they're going to screw things up unless we slap some stronger rules on them. And instead of building those rules on principles, we build them on personal preferences, like a harbor tie-off that is just  a free-floating buoy that is not tied to anything itself.

That explosion of Unprincipled Rules for Those People in turn feeds the decay of rule-following, because when someone slaps you with a stupid rule, you're just that much more inclined to dismiss not only the importance of following that rule, but of following any and all rules. So, more rules, and more rule ignoring.

But trying to live by trotting out your principles and values and then analyzing the situation for every single situation-- well, that gets tiring, and lots of folks are in situations where having to choose is hard because no choices look good (like, say, the last election cycle). So instead of tying their ship to something stable and solid and anchored in the earth's crust, they just look for someone to hook onto, so they can just follow along and not have to navigate for themselves any more. And the more everything else in the harbor looks like the chaos of a million unmoored crafts, the more appealing it is to tie off to someone who declares, "Follow me. Let me steer you. I will keep you safe and on course." And that just leads to a bunch of arguments about which such boat is the best one for everyone to hook up to, instead of talking about how we should all just find our own moorings.

For teachers this has been particularly challenging. We are by nature fans of rules. We like them. We expect our students to follow them, and we are inclined to follow them ourselves. But the rules have been turning ugly and capricious for a while, rules that are unmoored and unattached to any principles of education, any facts about educating humans. We've been coming to understand that we must either navigate for ourselves or hook our craft to a loose buoy that will drag us right over the falls.

Rules that are not anchored in principle are just expressions of personal power. And that challenges one of the foundations of our society. We were a country built on rules anchored to principles, explicitly rejecting the idea of rules based on personal power, and now we are beginning to realize that we have been inching toward autocracy for a while, and we're, maybe, just about there.

As a classroom teacher, I deal with this by making sure that I'm operating out of principle, and that I examine all of my assumptions and ideas regularly, including what input I gather by reading, listening, paying attention.

As a person, I've been doing this work for years, not because I'm some sort of highly-principled virtuous person, but because I'm not. I've done stupid things, hurtful things, terrible things, and I would rather not do any more, and I have learned the hard way that autopilot is not my friend.

There are people I trust a great deal, people whose judgment I value and whose point of view I consider worth examining. Not all of these people would agree with each other, and there isn't one of them whose judgment I would follow blindly (though a few come pretty close-- hi, honey!) I don't think I will ever reach a point in my life when I can say, "All right then-- I know everything I need to know about that." I work hard to be keep myself connected to principles and values that I can trust, and I like to think that my moral compass is pretty well-tuned, even as I am fully aware that every person who ever did a terrible thing was sure their compass pointed to true north.

In some ways, I see all of this as the central huge challenge of teaching today-- how do we help bring students up to be able to find their way in a society that has become unmoored. "Just follow the rules" or "Just do the right thing" or "Always trust the authorities" were once standard childhood advice; now they seem ridiculous. How do we help young humans find their way when we can barely find our own? How do we help young humans find a way without telling them which way they are supposed to find?

Is it too hokey to say that love, empathy, kindness, and unselfishness are a help? I don't think so, though clearly those are not values in ascendance in Trumpistan. I don't know if we ever get back to a place where our ships are safely moored, anchored to something solid and true. Maybe the best we can hope for are reliable compasses, and if that's true, then I think we could find worse metaphorical compass points than love, empathy, kindness and unselfishness. That's my hope, anyway.
Posted by Peter Greene at Saturday, January 14, 2017
Email ThisBlogThis!Share to TwitterShare to FacebookShare to Pinterest