Humans come out of the womb predisposed to believe in One Right Answer, and some of us spend our whole lives searching for it.

I watch my students (mostly high school juniors) struggle with it. There's supposed to be One Right Answer for which college to pick, which career to pursue, which partner to marry. One beloved fantasy has persisted for all the decades I have taught (and my years as a student before that). "I wish," says a student, "that somebody would just appear and tell me what I'm supposed to do. I wish somebody would tell me what the right answer is."

Growing up, I believed in One Right Answer even as I didn't. Like many fifteen-year-old, I believed that many of the right answers proposed by The People In Charge were wrong-- and that I knew what the One Right Answer really was. I went to college and learned there were two kinds of English professors-- those who believed that there was one way to read each work, and their job was to teach us what it was, and those who believed that there were many right answers, and their job was to teach us how to find an answer that could be argued successfully with evidence and sense. I decided I wanted to be the second kind.

I still thought there was One Right Answer to most of life's questions, and that was a belief that I rode right through marriage and into divorce, plus any number of other major and minor screw-ups. I believed that the way to navigate life was to lock the steering wheel in place and set a brick on the gas pedal, and if you hit a tree or drove off a cliff, that just meant you needed to recalibrate the steering wheel and get a different-sized brick.

Eventually, sitting in the rubble at the bottom of a cliff, I saw a light bulb (I never claimed to be a quick learner). The One Right Answer is that there is no One Right Answer. The best you can hope for is guidance by principle, relationship, context, and timing. You drive the car based on where the road goes, where you want to go, maintaining a speed that keeps you connected to the road, and turning the wheel at the right moment. 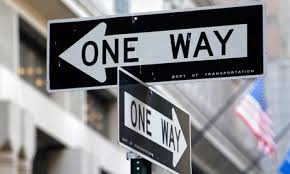 I believe that the most fundamental thing that we teach students is a view of How the World Works, and I also believe with all my heart that we do them a huge disservice if we teach them that the world is a place built out of One Right Answers.

When colleagues periodically suggest that we adopt one set of documenting standards for research papers to be used throughout the whole school, I always argue against it. "But why," goes the argument," should they have to use one set of standards in one class and a different one for that teacher and different ones when they write a paper in that other department." My answer is "because that's how the world works." When they get to college, different professors and departments will have different requirements. If they end up writing professionally, they will have to adhere to the local style guide. I still teach documenting and endnotes and bibliography and the rest, but the first rule I always teach is this-- the correct style is the one preferred by the person who is giving you your grade or signing your check.

Over the years, I have read calls from administrators for completely consistent grading systems within schools. I understand how undesirable it would be to have a school environment where grading systems varied wildly from teacher to teacher and day to day. I have personally experienced the frustration of being the teacher at a grade level who does NOT give the easy grades, watching students bail out for a transfer to lazier pastures. But what is the value in teaching students that they will answer to exactly the same standards no matter where they go or what they do? Will they get a standardized job for a standardized boss? Will they marry a standardized spouse and raise standardized children?

When dealing with actual human beings, you have to deal with the actual specific individual non-standardized human beings. Why would we not structure schools to teach that same lesson?

This is one of the reasons that charter schools often present the opposite of choice. Because they are set up around one very specific vision that is pushed down through every staff member, modern charters often can serve just one type of student. Meanwhile, larger, messier public schools offer a wide variety of educational styles under one roof. Students should be able to go to a school where they can find teachers and classes that match their personal style and interests; students are not served by a school in which all teachers and classes are identical interchangeable widgets. They should be able to go to such a pluralist school not just because it's better for their education, but because it's better preparation for real life.

Belief in One Right Answer is particularly problematic in difficult times. It is precisely the belief that gets you an ugly monstrosity like the candidacy of a Trump or a Cruz-- we are in trouble and we need the One Right Answer so let's turn to the guy who confidently asserts that he has it.

The belief in One Right Answer is the paving stone of the Road to Totalitarianism. Every Fascist and Beloved Leader made the same deal-- I will take all the power and give you the One Right Answer.

Yes, I realize that I'm arguing that allowing English teachers to require different endnote punctuation within the department is a step to fighting Fascism. I know it sounds like a large journey for such small steps, but I believe all large journeys are made of small steps.

And no-- I'm not arguing that we tell students that 2 + 2 = whatever they want to say it equals. For every question there are many answers, and some of those answers are easier to justify than others. Some vary over time and circumstances more than others-- 2+2 works out pretty much the same almost all the time, while "what shirt should I wear today" varies a great deal over time, space, individuals, and shirts. Somewhere in between we find questions like "What does Hamlet mean by 'to be or not to be'?" and "What caused the Great European War?" and "What do I want for a job?"

If we are not careful, we model for our students a world in which they are blind and helpless, trapped in a darkened room where there is one object-- chosen by someone else-- that they must fumble around for in hopes they'll know it when they touch it. Or we can model a world where they are free, clear-eyed, and know how to turn on the lights so that they can look around the room and find what they themselves have chosen to look for.

Belief in One Right Answer disempowers, limits and dehumanizes. And it's a bad model for how the world works. We don't have One Right Answer for whom we should marry (or not), where we should work, what car we should drive (or not), or how we should raise our children. We need our guiding principles, our sense of who we are, our understanding of the situation, our relationships with the other humans involved, and the particular moment in time that intersects with all the rest.