That's what it was to be alive. To move about in a cloud of ignorance; to go up and down trampling on the feelings of those... of those about you. To spend and waste time as though you had a million years.
--Our Town, Thornton Wilder


Our Town, like most great works of literature, gives up new rich layers of insight every time it's viewed, read, performed. The only dramatic work I've taught more often is Hamlet, and like Hamlet, it turns out to be about something a little different every time I teach it. But for both works, there are always some constants. Hamlet is always, at least in part, about death. And Our Town is always, at least in part, about wasting time.

The above line is from the bitter, troubled Simon Stimson, talking to Emily about her troubling journey back into her own past (at this point they are both dead-- Simon from suicide, and Emily in childbirth). What Emily has seen is a world of people who don't pay attention, who don't really see, who fail to "really realize." She doesn't say it, but she could have-- people ignore Thoreau's idea to "live deliberately." Emily might even have quoted Hamlet, appropriating the infamous "to be or not to be" not as its cliched contemplation of suicide, but as the question, "Do you want to really, actually live your life, or just sort of sleepwalk through it?" Wilder chooses to put a more apt summary into the voice of the failed and unhappy Stimson-- "To spend and waste time as though you had a million years."

These thoughts are never far from the surface for me; they're central to how I try to live my life. But there are times that strike them hard, make them resonate like a tuning fork planted hard against the bone. 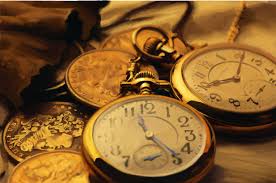 A few weekends ago, my father-in-law suffered a pair of strokes. He's home now, working on his recuperation, and doing pretty well. But he's not an old guy. This is way ahead of schedule.

And this weekend, one of our school board members passed away. He was a retired teacher, just a couple of years older than I. We grew up in the same church. When I was a putzy middle schooler, he was one of the cool high school kids. His son is one of my former students, and his daughter is in my class this year. He beat illness years ago, and it reared up again just recently. This was not supposed to happen.

One of the central challenges of being fully human is figuring out how to respond to the finite nature of our lives. Panic, despair, nihilism, resignation, frantic racing, irresponsible frittering, and joyless intensity are all answers that I reject (and this is too big a nut, and I am not a wise enough man to crack it, in this space). But I believe there is one clear moral imperative that follows from our finite lives--

Do not waste time.

In particular, do not waste other peoples' time.

It is one of the promises that I make my students every fall-- "I will not knowingly waste any of your time this year. Everything we do we will do because I believe it is not a waste of your time to do it."

I'm pretty sure that's the bare minimum we can promise our students. I'm not saying that it's easy-- one student's critical lesson is another student's waste of time, and without a crystal ball, it's a challenge to read the future and know just what tools will come in handy to the students five, ten or twenty years from now. I even accept that handling the pointless demands of a powerful bureaucracy is, in its own way, useful preparation for a future in These United States (though, in the interests of transparency, I will be honest with my students about what we're doing). These years they spend in school are not some sort of free time, some batch of practice days that don't count against the grand total of their lives. These days in school are part of their slim total. Their lives will not start "someday." Their lives are going on right now.

All of us on the planet make choices daily about how to use our own time. Some of us with power and privilege also make such choices for other, younger humans. We have an absolute obligation to make those choices as responsibly as possible, to not waste the few, finite moments that those students have on earth. We don't have a million years and neither do they-- some of us barely have fifty or sixty, and a few of us, sadly, have even fewer. Why waste that time on one standardized test after another or, even worse, days and days and days of preparing for those Big Standardized Tests. "Life is short-- take more standardized tests" said nobody ever.

Life is grand and joyous and messy and rich and churning with a thousand different flavors of a raw and beautiful power. It is also brief. Do not waste any of it.