For several days I've been part of a protracted twitter discussion of the use of LMS (Learning Management Systems) in education. The discussion emerged from a previous piece here, bounced around twitter, which led to this post from Anthony Cody, and then I think it went on some more. (Multiday, multivoice conversations on twitter about contentious topics are like trying to play soccer with your legs duct-taped together and a badger stapled to your head.)

Learning Management Systems are a complicated issue, both an opportunity and a challenge. Are they good news or bad news? Well.... 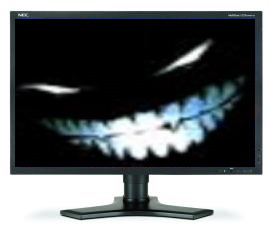 I am a fan of the basic concept. I lobbied hard for my district to adopt Moodle ages ago, and when we moved to one-to-one computing, I was ready to leap in. Moodle is a widely beloved LMS, an open-source platform of the college-popular Blackboard. It allows the teacher to push material out to students and for students to respond in a variety of pipelines. I've used it with my own students, and I have taken on-line courses that used Moodle as their platform.

We ultimately dropped moodle because it would have required our IT department to buy and dedicate a server to managing it. We next switched to My Big Campus, a free web-based platform that was not so wonderful. Currently we have shifted into the Goggle universe, where a complex of edu-tools really want to simulate an LMS, but, well, not so much. And that's before we get to the creepy, creepy creeping of the googleverse.

But even in the worst of these LMS platforms, I've been able to use the technology to extend my class beyond my walls and my day. Moodle was an excellent too for class discussions that favored writing skill over vocal volume. All have allowed me to fold mini-units into a class without costing me valuable classroom time. The LMS can absolutely be a useful tool for the classroom teacher.

That said, the LMS can also be a useful tool for administrators and policy makers who want to strip classroom teachers of every last vestige of autonomy and professionalism.

Consider this example, which promises not just an online, but course agendas, outcome-based gradebook, a searchable library of standards-based projects, and extensive library of instructional resources. In other words, it comes pre-loaded with everything a district would need to lock its teachers into implementing competency-based education. An LMS is a perfect tool for implementing the complicated record-keeping and data collection of a personalized CBE program.

Who's correct? Both of them, sort of.

An LMS is like a bucket. You can fill it up with a delicious giant root beer float or a large serving of arsenic stew. You can use it carry fluffy bunnies or poisonous adders.

Or if you like, and LMS is like a gaming platform. You can't actually play anything on it until you load up game software, and then what you can play depends on what software you loaded. Is a Playstation 4 for playing shooting games, sports simulations, or dancing games? Yes.

It's also true that while a tool can serve many purposes, good and bad, a tool also influences its own uses. If your bucket isn't watertight, you can't carry root beer or soup. And its size and shape will influence just what you can carry in it. Meanwhile, your Playstation 4 cannot be used to play Mario Kart, or any other game that doesn't come in a compatible software configuration. You can use a hammer to drive a woodscrew, but it won't really work out well. You can't change a light bulb with it at all. And as long as your only tool is that hammer, everything sure looks like a nail.

When it comes to software, small details have big implications. I bought the phone I have because the lock screen has a button that takes me straight to the camera, which means I can always quickly grab a shot of something. My old phone took so many buttons to get to the camera that I took few pictures, but with this phone I now take many. Moodle's discussion function was great, and so I did many on-line discussions with my students. Google's discussion feature is far less handy, and so that feature has disappeared from my course.

In short, yes, an LMS is just a tool. But no tool is neutral; all tools encourage and discourage various functions. The LMS is a tool that naturally favors controlling a classroom, a school, a teaching staff, even an entire district from a distance. It is the perfect tool for top down control-- particularly top down control by someone who doesn't have the guts to exercises that control face to face (like, say, in meetings where people ask questions and express disagreement and just generally try to force you to listen to them). And an LMS hooks up quickly and easily to your preferred conduit for hoovering up a ton of data from the students.

So I don't believe that any Learning management System is inherently evil, and I have in fact used them myself, on purpose, willingly, and will do so for the rest of my career. But-- and this is the huge but-- they lend themselves very easily to some of the worst kinds of abuses-- the top-down, disempowerment of teachers, the over-reaching Big Brothery data mining of students, the inflexible imposition of sameness through bad standards and worse instruction-- and for that reason they must always be viewed with a careful and wary eye.

It is true, as various folks have typed on the interwebs, that an LMS can A) provide a great opportunity for teacher empowerment and B) provide a great threat for terrible reformster policies to shove their big fat noses into the educational tent, with the full animal (including the part that poops) close behind. For that reason, it would be a huge mistake to ever assume that either of those things is happening without taking a careful look first.