There has never been a lower percentage of college freshmen interested in teaching.

This comes courtesy of UCLA's annual survey of first time freshmen, a survey that has been collecting data for about fifty years. You can read the full survey results in a report here.

There are several interesting takeaways from the survey, including the finding that today's freshmen are more likely to protest than any freshmen in quite a while. Also, they feel financially strapped (especially women), less connected to a particular religion, and very focused on job prospects. Also, LGBTQ students are far more likely than their straight peers to feel overwhelmed and depressed.

But for the education world, the most striking data comes from the survey question asking in what field the freshmen plan to major. The percentage of probable education majors stands at 4.2%, the lowest percentage ever since the question was first asked in 1971. And that 4.1% comes at the end of a fifteen-year decline-- at the turn of the century, the figure hovered around 11%.

The other dip in teacher enrollment came in the early eighties, when the numbers hovered around 6.5%. In that period of time, business majors were the burgeoning group. Currently, physical and life sciences are the only big growth, followed by a small bump in engineering. 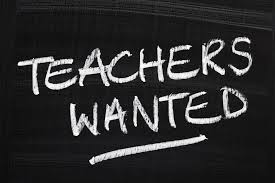 The big topic for discussion is, of course, why. We can sort through other factors (there is a great interactive chart here) to see if there's anything special about this generation of freshies.

Some of the info is worth knowing about for those of us who teach high school. These college freshmen feel more overwhelmed by all that's required of them than any previous group. Also, a smaller percentage than ever before got into their first choice college. More than ever factored "getting a job" into their college choice (over 80% for the last seven years). On the other hand, the percentage who consider themselves better than average writers hasn't budged much in twenty years (mid-forty percent). Self-assessment of spirituality, mental health and physical health is slowly marching down, while self-assessment of academic skills is slowly climbing.

So where did they all go?

I'm not sure that anybody is surprised by the collapse of the teacher pipeline. But for the sake of completeness, let's rattle off most likely culprits for those people who are actually uncertain how such a thing could happen.

This was Suspect #1 on the list for NEA's response. States like North Carolina and Kansas have done their best to keep teacher salaries low low low, meaning that someone who was actually going to college could reasonably conclude that any other major in the world would provide a better chance of making it possible to live like an independent, family-supporting grown-up. When we start looking at notoriously expensive-to-live places like Las Vegas or Hawaii, the money problem just gets worse.

This year's freshmen have never known anything except the twin reformster regimes of No Child Left Behind and NCLB-Lite (waivers and Race to the Top). They grew up in a world where the Big Standardized Test was the be-all and end-all of education and where teachers are increasingly directed to serve as content delivery units. The sense of mission, the dedication to a higher purpose, and the autonomy to make a difference in the world by using one's own unique skills and gifts-- that has all been increasingly stripped from the profession, and these students have watched it happen, or, worse yet, arrived on the scene after the stripping was done.

"I can hardly wait to start a career where I can follow orders all day and try to help just one student bubble in just one more right answer," said nobody, ever. Also, "I want a job where I go to college and get an expensive education, and when I come out, I don't make any difference at all-- it could be me or some other shmoe off the street, doesn't matter." Nobody ever said that, either.

It's not the drip-drip-drip of Huffington Post's relentless curating of criminal teacher stories. It's not the same-old-same-old insistence of some folks that teachers should get minimum wage because we only work part time. It's not even the vilification of teachers' unions as agents of evil in society as a whole. None of this is new. What is new is the Hunt for the Legendary Bad Teacher becoming a matter of policy and law. What is new over the last two decades is the insistence that teaching is no more a professional field than is bagging groceries. Get five weeks of training. The Las Vegas Journal-Review joined a chorus calling teacher certification requirements unnecessary and "protectionism." There's nothing special about being a teacher.

And meanwhile, while education is discussed on tv and in boardrooms and in politics and in a variety of media events, nobody ever talks to a teacher. The slow-but-steady effect is the hammering home of the message that when it comes to education, there are many experts, but none of them are actually teachers.

Back in my day, sonny, you accepted that teaching had relatively low pay and accepted that as a trade off for job security. If you did a good job, you could relax knowing that you could plan a life without looking around every corner for some job-snatching catastrophe. But now we've removed all manner of job protections across the country, while still pushing to get rid of more. Low pay plus the prospect of losing your job at any time for any reason?? Yes, please! (For those who want to respond, "Yeah, just like any other crappy job in this country," see previous point.)

If you are not a white female, the odds are good that you could get through most of your K-12 education without ever seeing a teacher who looked like you. That means that even when you were in a good class with a good teacher who didn't look like you, the part of your brain that would say, "Boy, I can see myself doing this," was less likely to be awake.

Even as many districts go begging for teachers, many geographical areas have a glut of teachers in certain teaching specialties. In many areas, jobs are scarce because financial pressures are slashing programs and positions (in PA, we have shed thousands of teaching jobs every year for almost a decade).

Back in the day, an aspiring teacher could ride out a tight job market by substituting-- it kept you from starving and let you basically audition for districts so that when an opening did appear, you were right on the spot and a known commodity to boot. But substitute teacher pay has kept up with inflation only slightly better than the minimum wage has, and most aspiring teachers can't afford to substitute without some other source of support.

Many local districts and many states have done their utmost to make teaching as unattractive as it could possibly be. No respect, no autonomy, low pay, no job security, poor work conditions, no control over your professional fate, and treated as if you're a child. What could be more appealing?

I keep waiting for Free Market Acolytes to read the writing on the wall. After all, the invisible hand is very clear on this-- when people don't want to buy what you're selling, when people do want to take your job under the conditions you've set, that is a clear sign that you have undervalued the merchandise.

If you want to buy a Lexus for $7.95 and nobody will sell one to you for that price, that is not a sign of a automobile shortage. If you want to hire a surgeon to cut your grass for $1.50 an hour and nobody will apply for the job, that is not a surgeon shortage. If you want people to become teachers under the current job conditions (and that is a large-ish if because it's possible that some folks think it would be easier to run education if teachers would all just go away), and fewer and fewer people are biting, that is not the sign of a teacher shortage-- it's a sign that you need to make your job more attractive. This seems obvious to me. We'll see if anybody in power can figure it out.

Posted by Peter Greene at Tuesday, March 22, 2016
Email ThisBlogThis!Share to TwitterShare to FacebookShare to Pinterest