I have been through two strikes in my life.

The first was in Lorain, Ohio in 1979, and it started about three days after I was hired. It was my first job, and the strike was ugly. The superintendent had been hired for his union-busting skills. My building rep and my principal both advised me to stay home and keep my head down. The whole thing lasted over six weeks, and it was a vicious mess. I emerged absolutely convinced that almost anything was preferable to a teacher strike, but that

The second was in Franklin, Pennsylvania in 2002. I was the union president, and it was a contentious struggle. The board opened negotiations by stripping the contract, and their chief negotiator at one point said, "Yes, we have the money to give them a raise, but they don't deserve it." A couple of our union actions are on my "If I could take back parts of the past..." list, but for the most part I thought both sides managed things reasonably well and the district came out of the whole thing with a minimum of scarring. I don't have that many years left in my career, and I fervently hope that I never have to go through a strike again.

So I absolutely recognize the arguments put forth by two Chicago teachers in today's Chicago Tribune commentary. I am not going to try to speak for the Chicago teachers' union, but I can speak to why those two teachers are wrong and why, sometimes, teachers just have to take that kind of stand. 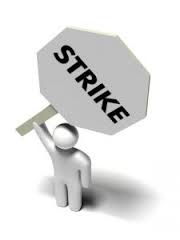 Their very first sentence is this:

Teaching is a personal mission, not a political one.

When we think of speaking out and being heard, most of us don't think about unions and politics. We think about what we need to do better to reach that child who misses too much school or struggles to read at grade level. We think about programs that we believe need to be implemented, supports that need to be in place. We want our principals to respect our assessments of what happens in our classrooms, we want our parents to understand that they need to be involved.

And I get that-- I truly do. The best teachers are absolutely clear that their primary mission is in their classroom, with their students. I have never encountered a strike or really any kind of teacher activism that did not evoke pleas of "But why do we have to get into politics? Can't we just teach?"

I get that, too. There's no question that unions sometimes get wayy too interested in politics and make bad decisions for as a result of strictly political calculus (like, say, endorsing a specific Presidential primary candidate way early, even though her education bona fides are not so stellar). And the politicized politics-playing mess that is the New York teachers union(s) is nothing to get excited about.

The problem, however, is that we teachers can decide we're done with politics, but politics is not done with us. Our work conditions, our pay, the very definition of our job and purpose-- they're all politically decided these days. And why do we hate politics? Because it's a bunch of baloney wrapped in posturing slathered with lies and soaked in bullshit dressing. It is, as P J O'Rourke once wrote, the accumulation and maintenance of unearned power.

I well remember early in my career thinking it, and during my second strike hearing my members saying it-- if we just lay out the facts and explain the truth of the situation, won't people just see what's reasonable and do the right thing? And here come our Chicago teachers:

If we want to be political, why not do so in a way that engages our communities, our politicians to truly hear what we have to say, that's not at the expense of our children?

Because most of your politicians can already hear what you have to say. In the case of Chicago, do you really think that Rahm is just hard of hearing, that he just doesn't hear you? He hears you just fine.

If we want to be political, and we are seeking more stability and funding for education, programming, schools and staff, why engage in a protest that further destabilizes, playing right into the hands of those looking for proof that the state must take over our schools and declare bankruptcy? Whom does that serve?

What any union has to ask is, "What role has proof played so far?" What willingness has the other side shown to listen to what the union, what the teachers, have to say?

As for the whom does this serve question, this is always the most important question teachers have to ask when contemplating a strike. Ultimately what you are weighing is the immediate needs of your current students against the needs of your students in the future. Teachers have a great tendency to be institutional enablers, trying to pick up the slack so that no children are hurt right now by bad policies or toxic leadership. While this is a noble impulse, it must be weighed against what will happen if the district gets no pushback on its bad policy and therefor continues to inflict it on thousands of students for years to come.

When the students of Boston Public high schools walked out for a day and the Powers That Be decided to re-instate budget cuts (sort of kinda), it wasn't because the PTB suddenly slapped their foreheads and said, "Oh, I didn't realize that budget cuts would actually cut peoples' budgets." They slapped their heads and said, "Oh, you actually care enough about this to make a real noise."

Striking is the last thing you want to do as a teacher. It costs you time and inconvenience, and invariably you lose some of the noble heroic shine of someone who puts the students before everything else. It can bust up relationships, destabilize a staff, and make a real mess. Nobody wants to start a fight. But sometimes the fight comes to you, and your only choice is whether you'll actually stand up for something or not. As Patrick Henry pointed out in his speech in the Virginia Convention, the war has already started-- there's no question of avoiding it, only of whether or not we'll try to stand up or just roll over and take our lumps.

You strike to make a statement. That statement is generally some version of "These policies are not okay" or "We are done being ignored" or "Better we suffer this small battle today than wait and be smashed apart tomorrow." The Chicago twosome frame it as a choice of whether "to punitively turn away or work together to move forward" but there are times when those are not the available choices and are in fact the equivalent of telling a battered wife "Why do you want to break up your family when you could get back in there and try to work on your marriage."

I say it again-- a teacher strike is my absolute last choice and there isn't a thing I wouldn't try first. But sometimes you reach a point where you have to recognize that the other party has no interest in solving problems together, but is only interested in pushing you as far as they can get you to go. At some point you have to plant your feet and say, "This is enough. We have taken enough. This cannot go any further-- not today, and definitely not for the children in the future. Somebody has to take a stand for our schools, our profession, and our present and future students. We have tried everything to work with you, but now we will make our stand."

As a veteran of two multi-week strikes, I have to say that a one-day work stoppage seems like a pretty measured and relatively mild job action. I hope that the PTB in Chicago hear what the teachers have to say.